THE PRICE OF EVERYTHING: PRIZE WINNING DOCUMENTARY ON HBO NOVEMBER 12

“There are a lot of people who know the price of everything and the value of nothing.” -Oscar Wilde

I happened upon an interview this weekend on National Public Radio with Nathaniel Khan, the director of the acclaimed documentary, “The Price of Everything” that appears November 12th on HBO. Garnering accolades from every film festival imagined, the documentary breaks down the boundaries in the art world between artists, collectors, auction houses, galleries, art critics, and more. As a self professed art addict and Sotheby’s alumnae, I cannot wait to see this look behind the curtain. When I introduce works of art to clients, I always address what makes it special and why it is valuable. I am excited to hear their answers to the same questions on a much grander scale.  END_OF_DOCUMENT_TOKEN_TO_BE_REPLACED

“What appeals to me most is their mystical quality. In my childhood, I was enchanted by the White Rabbit who leads Alice down a rabbit hole into Wonderland in an altered state. That’s always been important to me, the idea of altered states. When I am painting, I sometimes feel as though I am somewhere else, observing reality from an outside perspective.” -Hunt Slonem on “Bunnies” 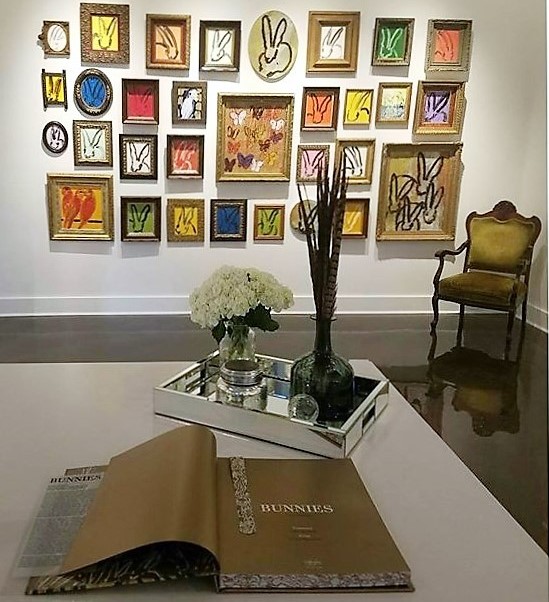 The New Gallery of Modern Art, Reception Tonight from 5-8PM

The New Gallery of Modern Art is celebrating their fifth anniversary this evening with a champagne reception, exhibition, and book signing by the one and only Hunt Slonem. I literally fell down the rabbit hole with his latest book on his beloved bunnies. Hopping from page to page in the book, the bunnies each have their own persona with delightful names such as Serge, Tatiana, Goldie, Harvey and Ted. His fascination with these creatures began at a Chinese restaurant when he discovered he was born in the Year of the Rabbit. He identified with the compassionate nature of the creatures, and uses them as subjects for his morning “warm-ups,” an exercise that was inspired by abstract expressionist Hans Hoffman.  Hoffman would begin each day by doing a series of small paintings.  Hoffman painted abstractions, Slonem paint rabbits. He often repeats imagery in this series, as he finds the act to be similar to spiritual meditation. Slonem believes that “repetition is very important” and begins each day painting, treating each moment as one of profound meditation and channeling of God or a higher consciousness. To date, his bunny paintings remain a part of his morning ritual, as well as a pivotal theme in his artwork. 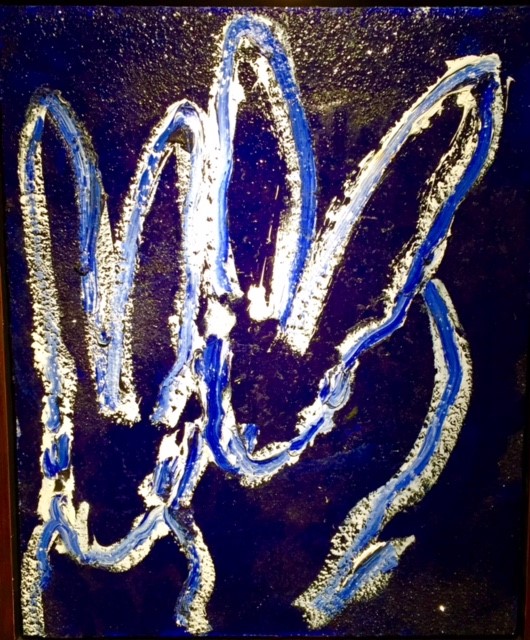 Slonem’s work has been compared to the likes of Willem DeKooning, Franz Kline and Brice Marden. In his essay Quantum Lepus, curator Bruce Helander writes,” The humble pleasure offered by these minimal but accurate portrayals of a hare to a harem is that they are lovely to look at. The initial development and completion of a characteristic Slonem bunny is really quite basic, and is the secret to their spontaneity and ultimate success; his instinctive painting can be connected to the lyrical brushstrokes of de Kooning and the black and white compositions of Franz Kline, or the soft, connective, geometric lines of Brice Marden.” 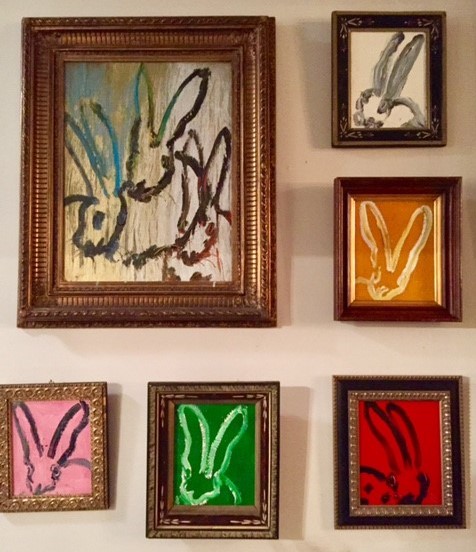 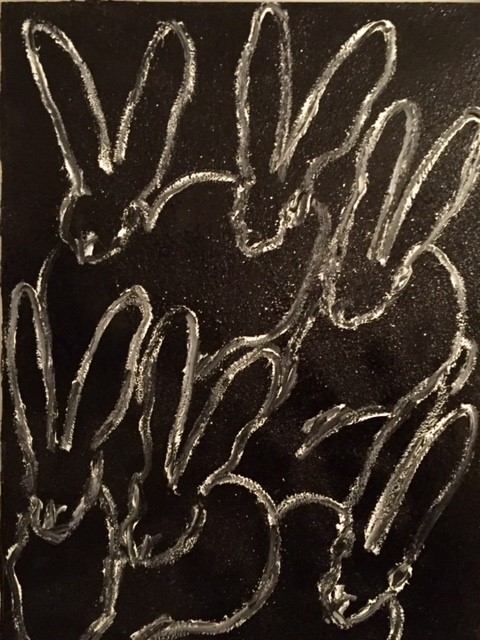 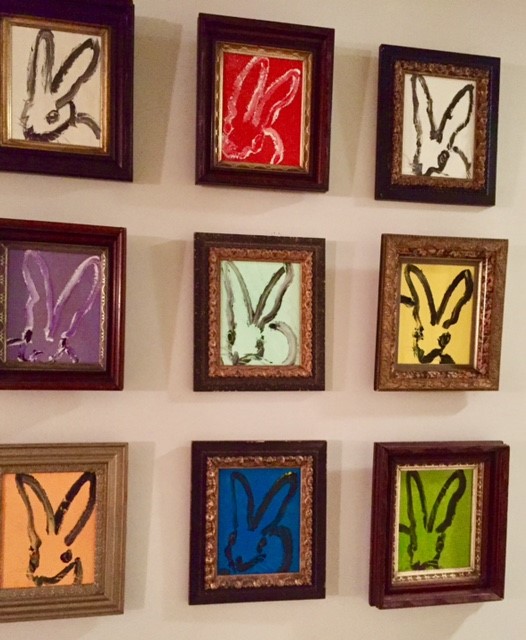 The artists’ love of creatures is not limited just to bunnies. He often works with a bird or two perched on his shoulder. Exotic birds also greatly inspire the artist’s work; he has a personal aviary, in which he keeps anywhere from 30 to 100 birds of various species at his Brooklyn-based studio. 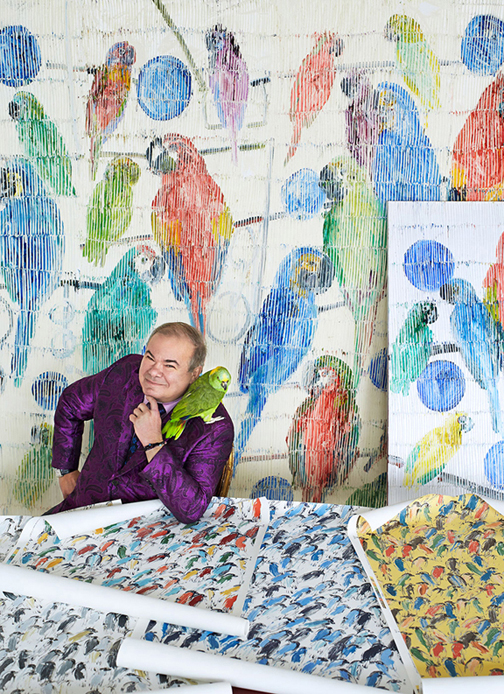 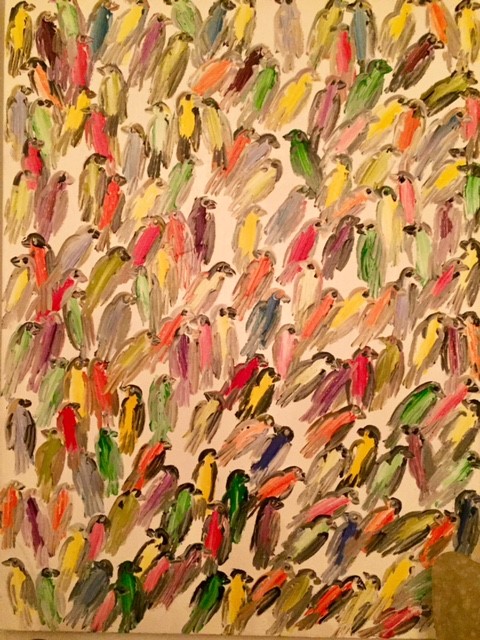 Hunt Slonem was born in Kittery, Maine in 1951; the eldest of four children. His father was a navy officer, while his mother was a homemaker who spent much of her time doing volunteer work. As a result of his father’s military career, Slonem spent much of his childhood on different military bases; living in Hawaii, Virginia, Louisiana, Connecticut, California and Washington. After completing school, which included living in Nicaragua as an exchange student at the age of 16, Slonem began his undergraduate studies at Vanderbilt University. He then spent six months of his sophomore year at the University of the Americas in San Andres Colula, Puebla, Mexico, eventually graduating with a Bachelors of Art in Painting and Art History from Tulane University in New Orleans.

During his collegiate years, Slonem attended the prestigious Skowhegan School of Painting and Sculpture in Maine, where he was exposed to influential artists from the New York area including Alex Katz, Alice Neel, Richard Estes, Jack Levine, Louise Nevelson and Al Held. This exposure played a pivotal role in Slonem’s artistic career, as it aided in his decision to move to New York in 1973. Three years after his arrival, Slonem received a painting grant from the Elizabeth Greenshields Foundation in Montreal, Canada and began painting extensively. However, it was his time spent in Nicaragua that Slonem credits with most influencing and inspiring his work. The country’s tropical landscape has informed not only Slonem’s process, but also his need to be surrounded by the nature he paints. As Slonem’s career progressed, he became an active participant in Manhattan’s burgeoning art scene, lauded not only for his artistic talent, but for his vibrant fashion sense. He was introduced to and befriended prominent figures within the artistic community including Sylvia Miles, Truman Capote, Liza Minelli, Monique van Vooren and Andy Warhol. 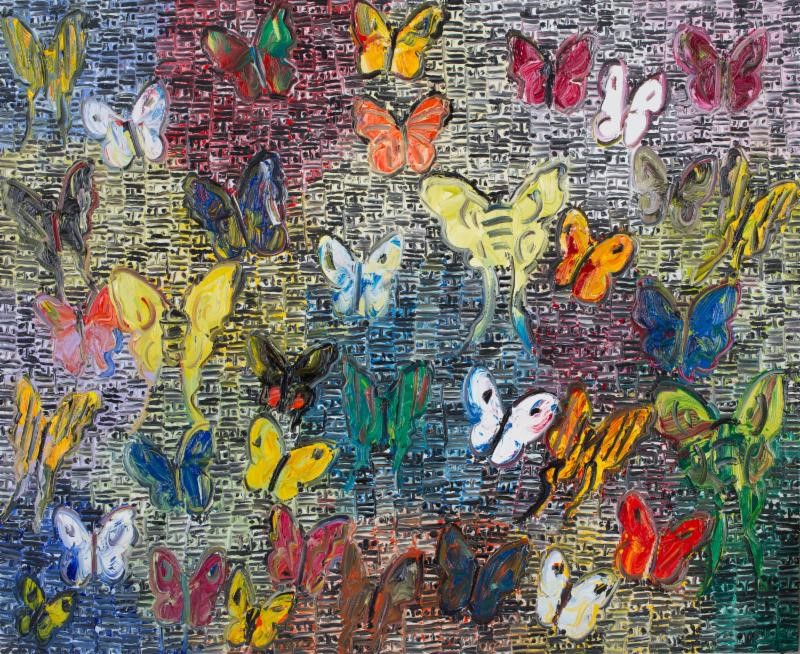 Slonem’s work is deeply rooted in the act of painting. His jarring color choices, spontaneous mark making and scratched hatch marks are the result of his ongoing fascination with the manipulation and implementation of paint. His paintings are layered with thick brushstrokes of vivid color, often cut into a cross-hatched pattern that adds texture to the overall surface of the painting. This surface patterning combines with the rich colors and recognizable subject matter to create paintings that are physically and aesthetically rich.

Slonem’s work can be found in the permanent collections of 250 museums, galleries, institutions and corporations worldwide. In 2015, Slonem moved to a new 35,000 square foot studio in Sunset Park, Brooklyn where he continues to work. He lives in Manhattan, but travels frequently to his other homes in Louisiana, upstate New York and Scranton, Pennsylvania, where he is undertaking the transformation of the historic 150,000 square foot Watres Armory into a multidisciplinary showcase for his own work, as well as for his extensive collections of art and antique furniture. 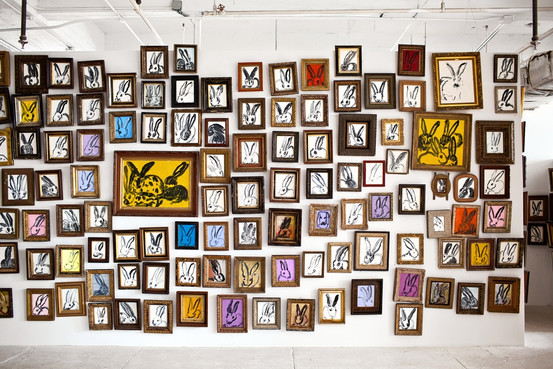 And if you cannot create your own wall of original bunnies seen above, you can always consider using his “Bunny Wallpaper” through Groundworks for Lee Jofa. 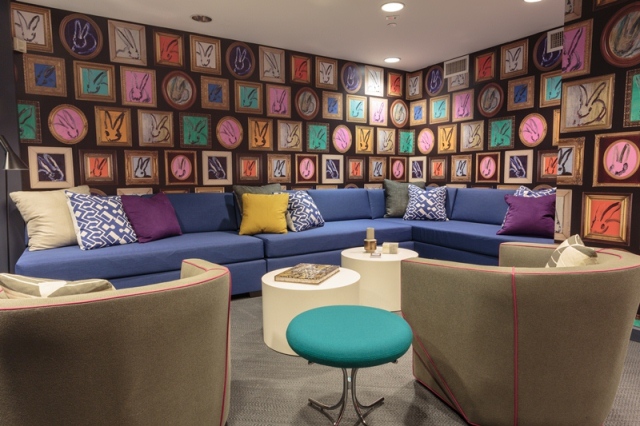 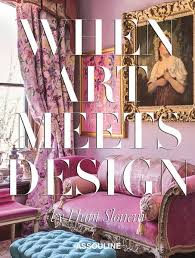 The creative force also has an innate talent and passion for refurbishing homes. Considering this part of his art form, Slonem has rescued, refurbished and meticulously restored a number of estates including the historic Cordts Mansion in Upstate New York and his two Southern mansions in Louisiana; Albania and Lakeside. Enhancing them with his transcendent, light infused décor, Slonem paired vintage furniture with contemporary art, including many of his own works in addition to pieces by Alex Katz and Andy Warhol. Beyond its majestic beauty, The Lakeside Plantation captured Slonem’s fascination for history. Listed in the National Register of History Places in Louisiana, it was once owned by Marquis de La Fayette whose close relationship with lifelong friends such as Thomas Jefferson, Benjamin Franklin, James Monroe, John Adams, and Robert Livingston played a pivotal role in the Louisiana Purchase. In a show of gratitude, the United States gave La Fayette the land, which is now known as Lakeside Plantation. When Slonem was young, he learned that Picasso collected chateaus, and since then always dreamed of doing something similar. Having reached that goal with these historic homes, Slonem would like for them to become part of his legacy, one day serving as study centers that can educate and inspire new generations of artists.

Slonem’s homes were the subject of an extraordinary 300 page, photography-based volume, When Art Meets Design (Assouline, 2014) A truly magical showcase of Slonem’s ability to create spectacular spaces, the book features vivid and expansive interior photography that reveals how he combines antiques, fabrics and artworks. 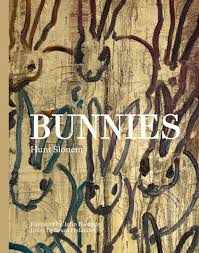 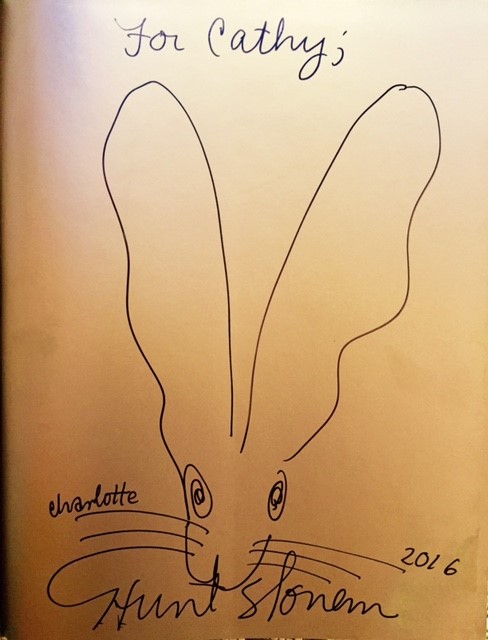 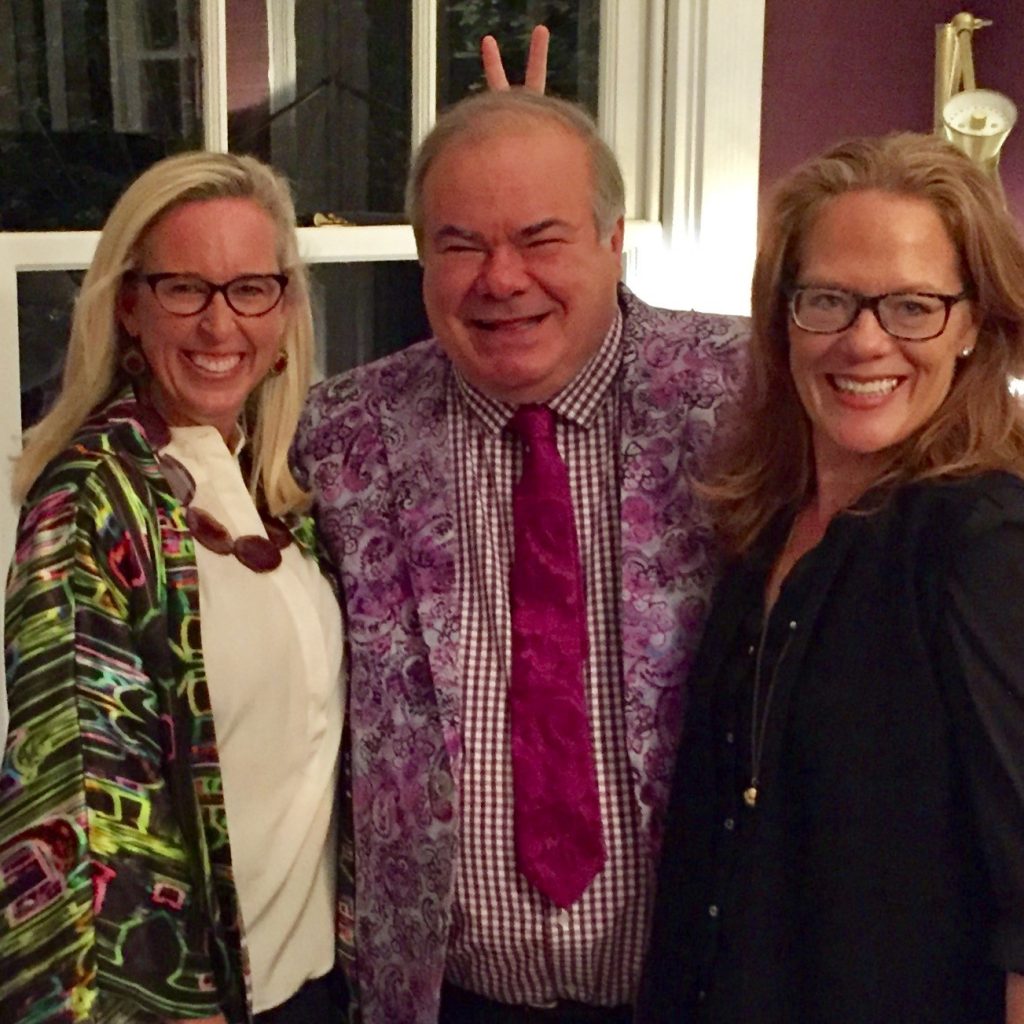 “Culture just seems to be in the air, like part of the weather.” – Tom Wolfe on New York City 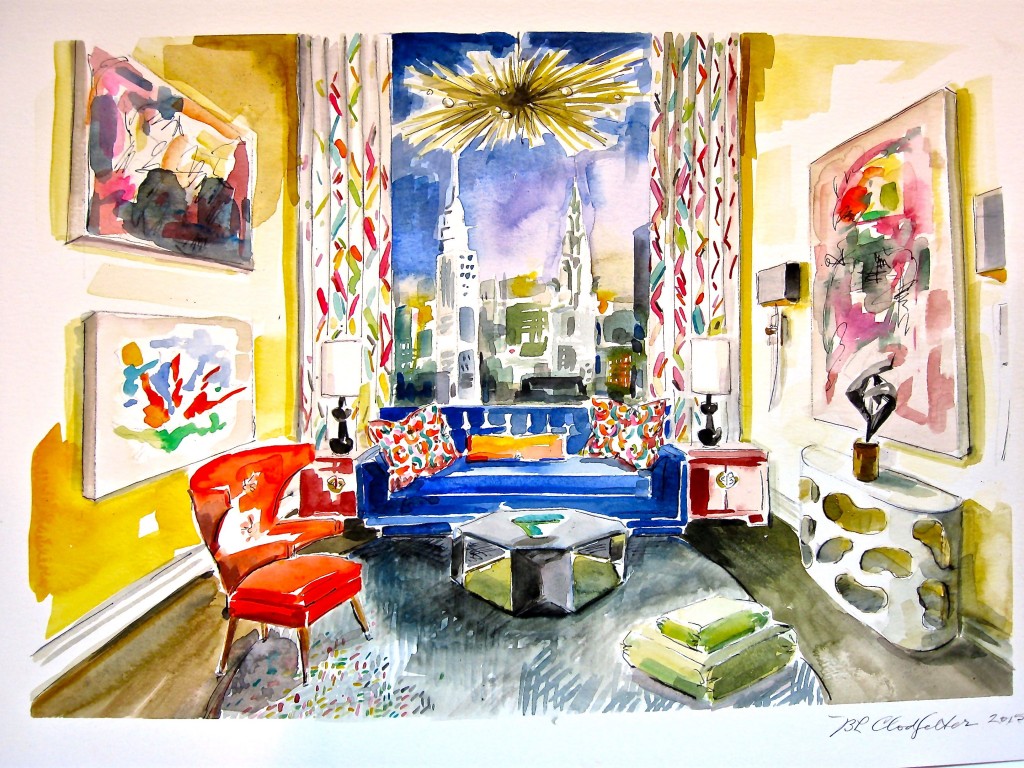 Welcome to my virtual “Artists Salon” for Dering Hall’s Wired & Inspired Showhouse in collaboration with the Atlanta Decorative Arts Center! When asked to design a space inspired by my favorite city, I let my imagination run wild creating my fantasy penthouse in New York City.  Be sure to click here to see the rest of the showhouse on Dering Hall including spaces by Angie Hranowsky, Beth Webb, Cathy Kincaid, James Wheeler Designs, Cloth & Kind, Tammy Connor, Yvonne McFadden, Melanie Millner, and Karen Ferguson. 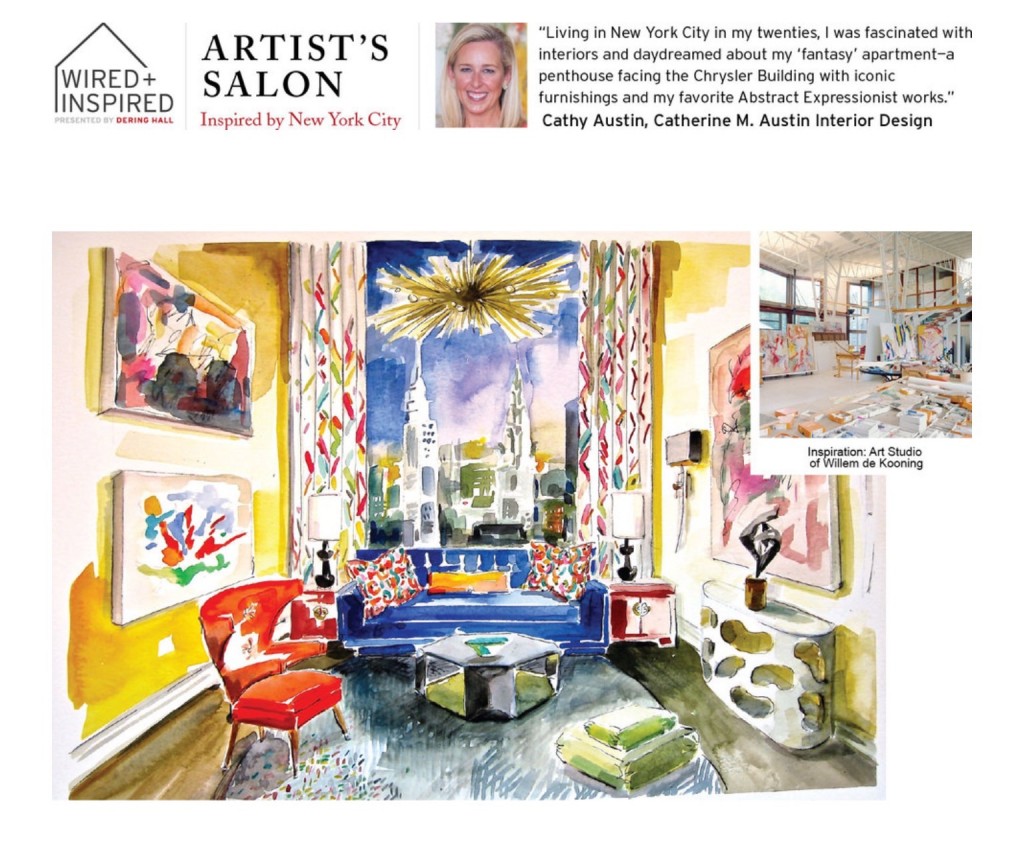 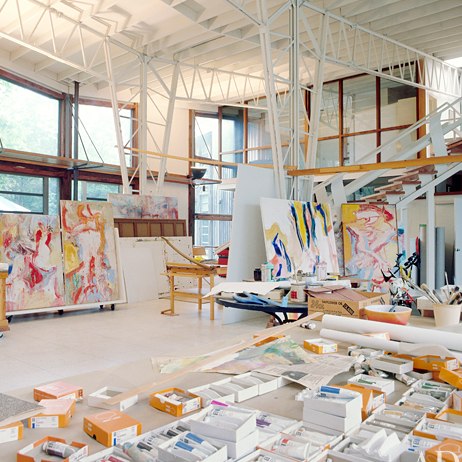 Living in New York City in my twenties made an indelible impression on me.  I felt like I had encountered the center of the creative universe that attracted the most talented, imaginative, and artistic people I had ever met. Since space was so precious and provided solace from the grind of city living, I became fascinated with how people treated their interiors. I used to fantasize about my “dream” apartment and this is my version of heaven…a penthouse overlooking the Chrysler Building, surrounded by a blend of iconic furnishings and paintings by my favorite abstract expressionists that also came to New York for inspiration. Whenever I need to get my creative juices flowing, New York is always my city of choice…taking in the latest exhibitions, observing what is happening on the streets, and soaking up the vibe of the city. 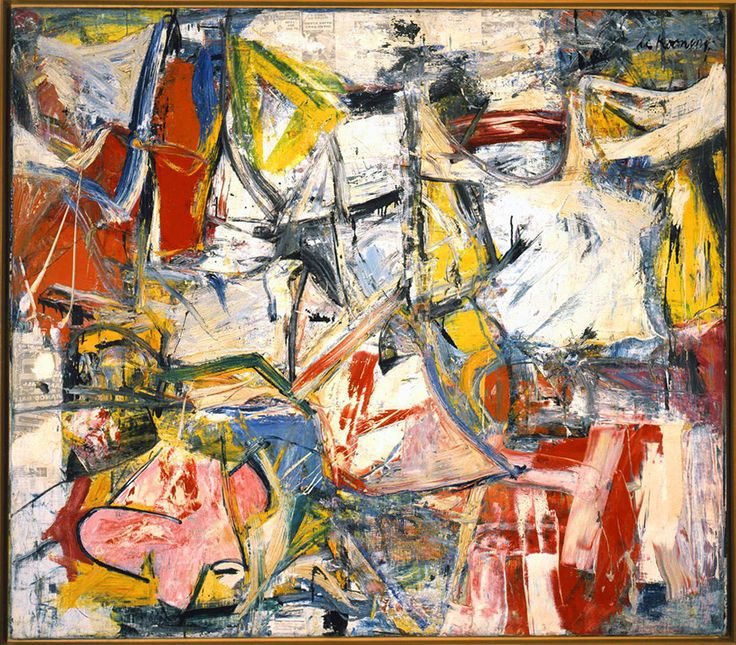 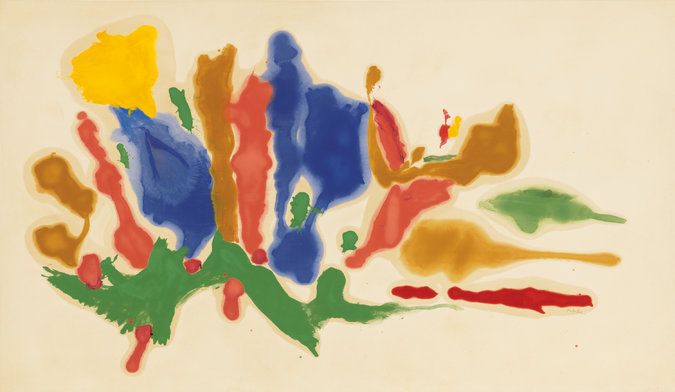 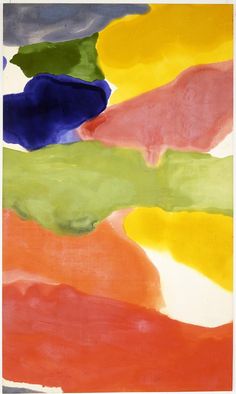 A double height penthouse overlooking the Manhattan skyline is the perfect backdrop to showcase the works of my favorite artists.  The Farrow & Ball color palette of the interior was inspired by the city lights, bold colors in the paintings, and Babe Paley’s infamous “taxi cab yellow” living room decorated by Dean of American Decorating Albert Hadley. 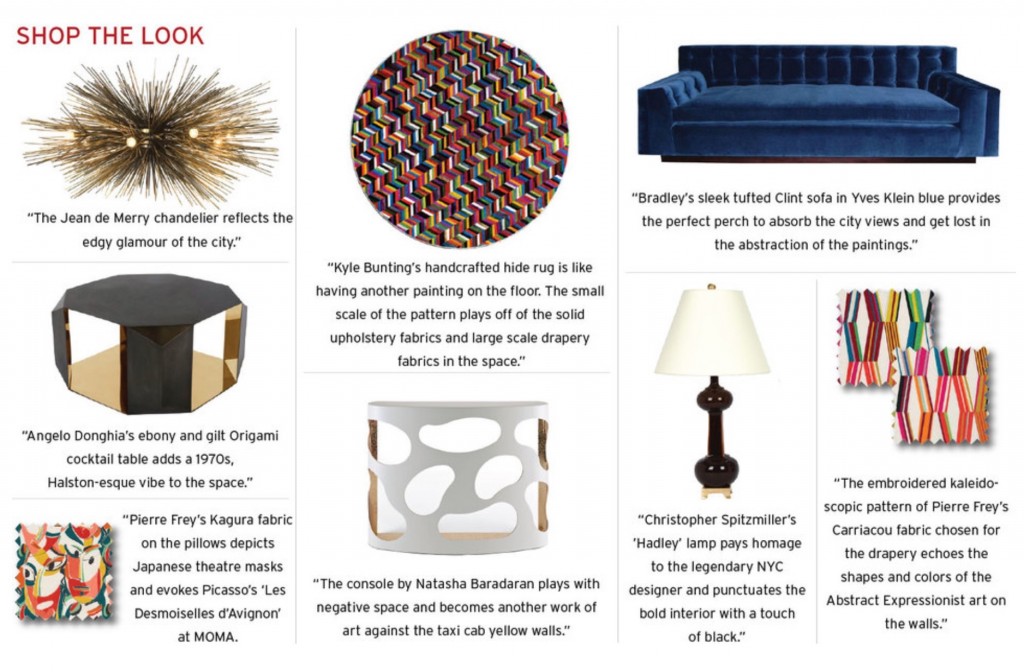 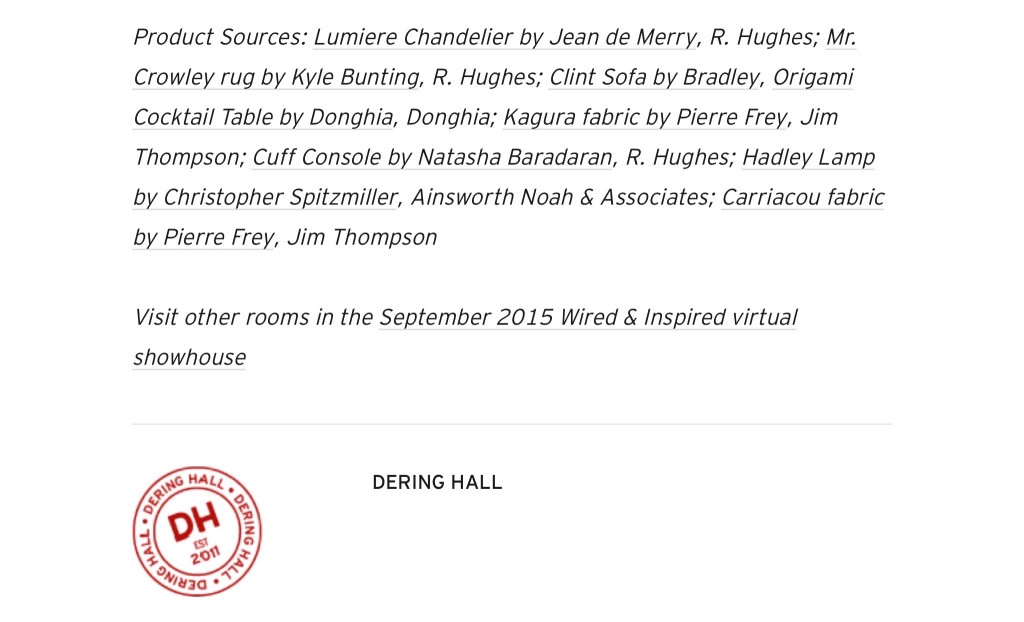 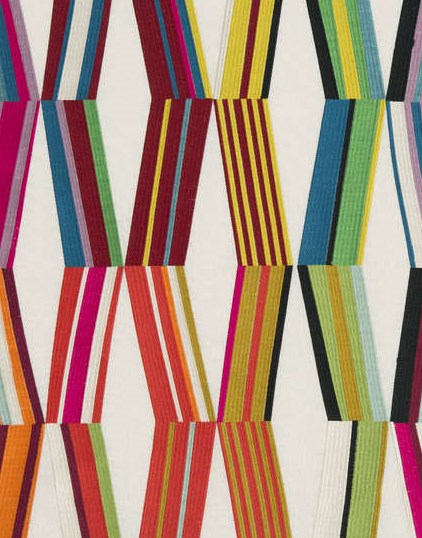 The large scaled embroidered linen kaleidoscopic pattern used for the drapery illustrates the creative process of Patrick Frey who is constantly playing with shapes and colors to keep his work fresh and exciting much like the Abstract Expressionists featured on the walls. 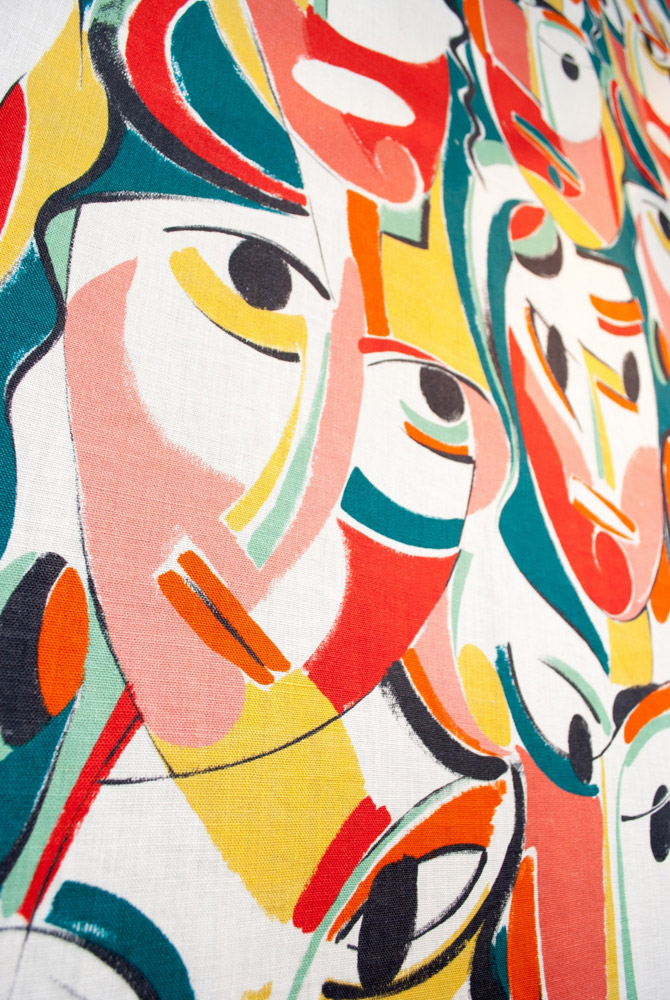 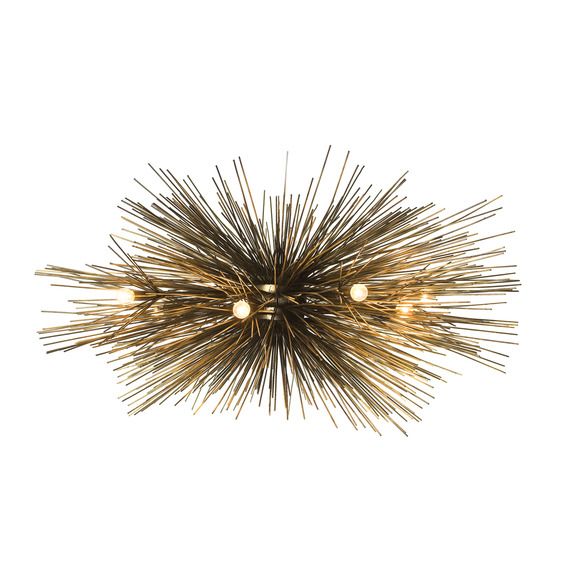 The Jean de Merry chandelier reflects the edgy glamour of the city. 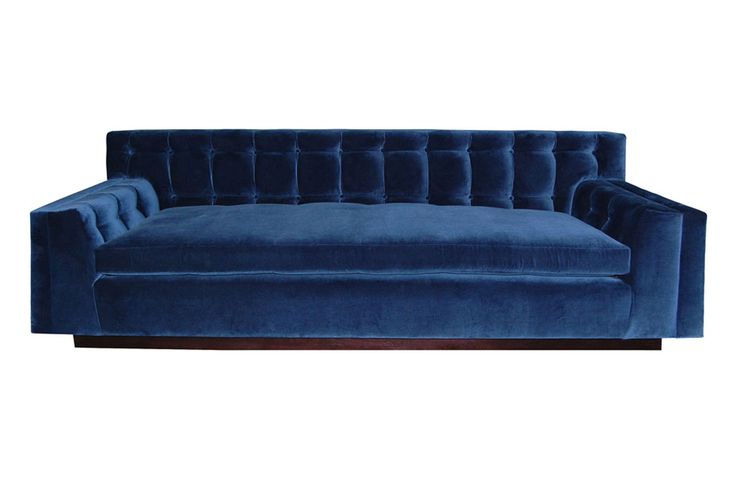 The Clint sofa by Bradley in  Yves Klein blue  provides the perfect perch to absorb the city views and priceless works of art by Helen Frankenthaler and Willem DeKooning. 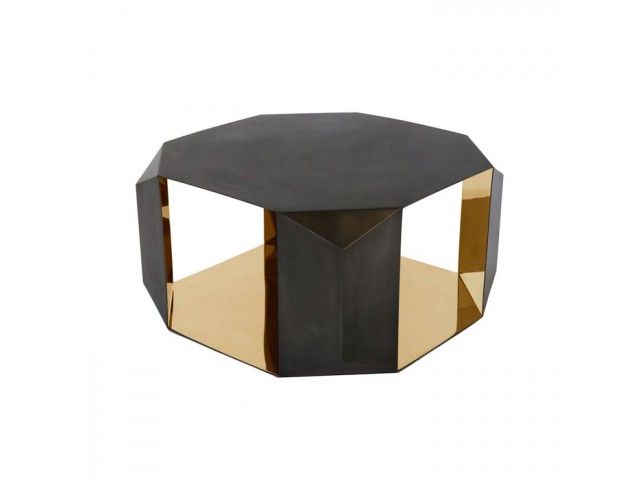 An ebony and gilt Origami cocktail table by Angelo Donghia adds a 70s/ Halston-esque vibe to the space. 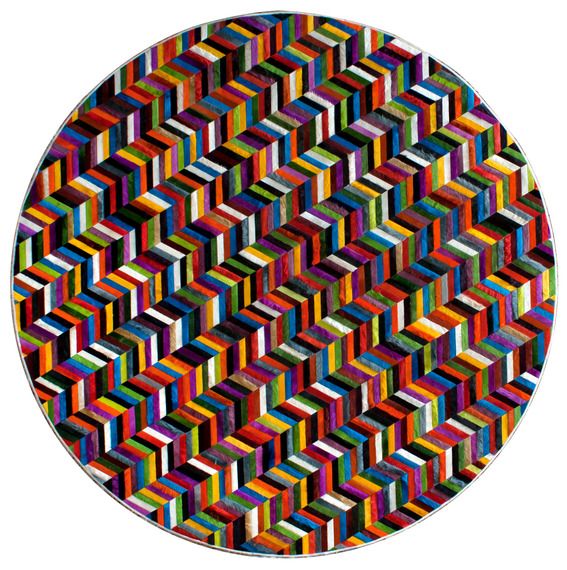 A hand crafted hide rug by Kyle Bunting is a work of art on its own, yet the small scale of the pattern plays off of solid upholstery fabrics and large scale of the drapery fabric. 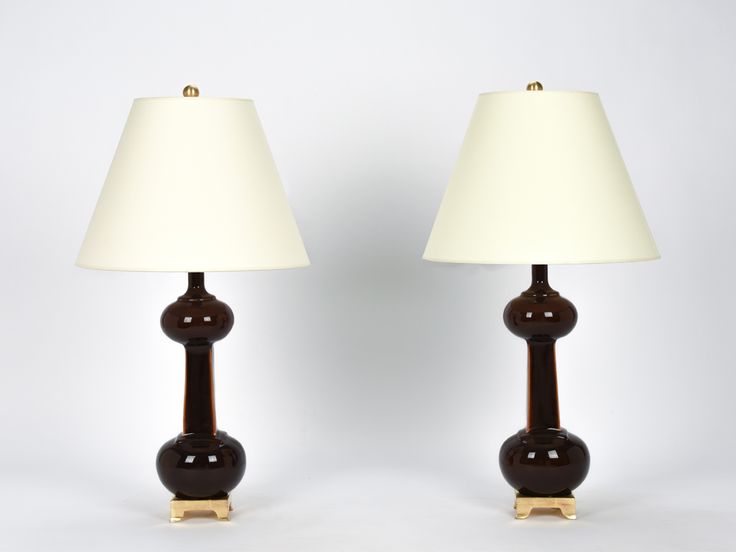 A pair of “Hadley” lamps by Chrisopher Spitzmiller pay homage to legendary NYC interior designer Albert Hadley while the touch of black punctuates the bold palette of the interior.

A Cuff Console by Natasha Baradaran plays with negative space and becomes another work of art placed against the taxi cab yellow walls.

A very special thank you to artist Becky Clodfelter for bringing my interior to life with her amazing talent!