I have been a fan of Nick Cave’s work since he was an artist in residence at the McColl Center here in Charlotte.  He combines my passion for art, dance and bold vibrant color into works of pure joy. His soundsuits “camouflage the body, masking and creating a second skin that conceals race, gender, and class, forcing the viewer to look without judgment or preconception.” I would have given anything to be in Detroit yesterday to see the impromptu flash mobs around the city celebrating the opening of his solo exhibition at the Cranbrook Museum of Art. #NickCaveTakesDetroit brings up a flurry of images and videos on Instagram that show how this one man’s imagination can inspire and bring a community together. 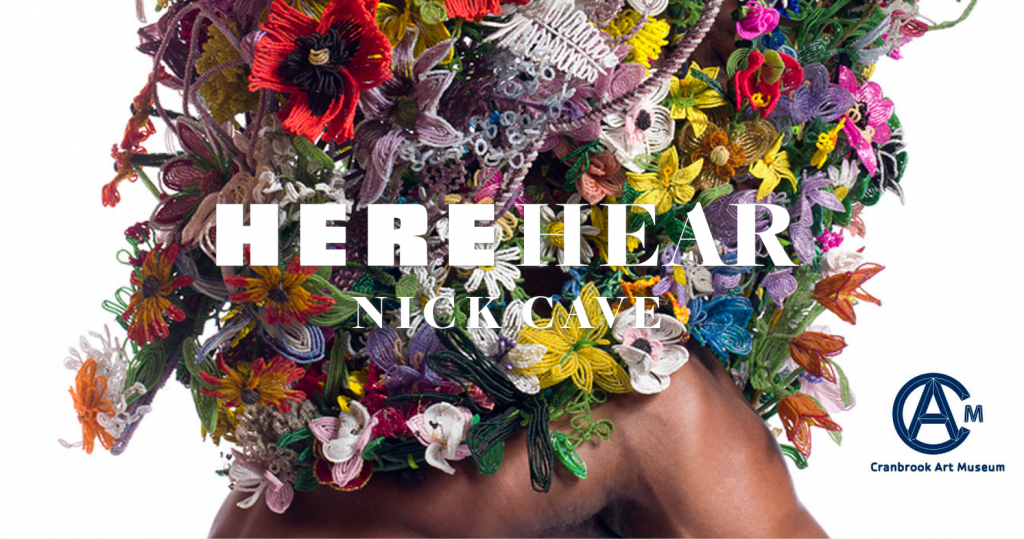 This spring, summer, and fall, Cranbrook Art Museum and Detroit will serve as the backdrop for Nick Cave’s most ambitious project to date – Nick Cave: Here Hear. At the invitation of Cranbrook Art Museum, Cave will stage seven months of events throughout the city of Detroit anchored by his first solo exhibition at Cranbrook Art Museum, opening this summer. Cave is a 1989 graduate of Cranbrook Academy of Art. Cave has said that the time he spent in Detroit was critical to his growth as an artist. He is returning to capture the positive energy currently enveloping the city. “Detroit continues to be an always-surprising environment of creativity, excitement, and engagement,” says Cave. 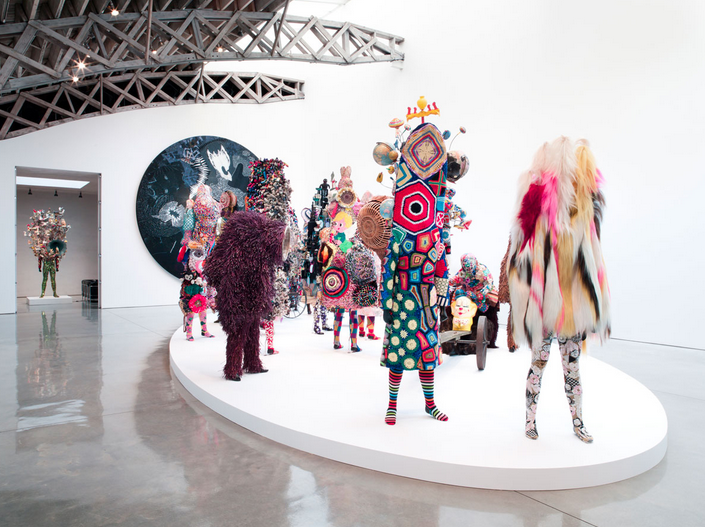 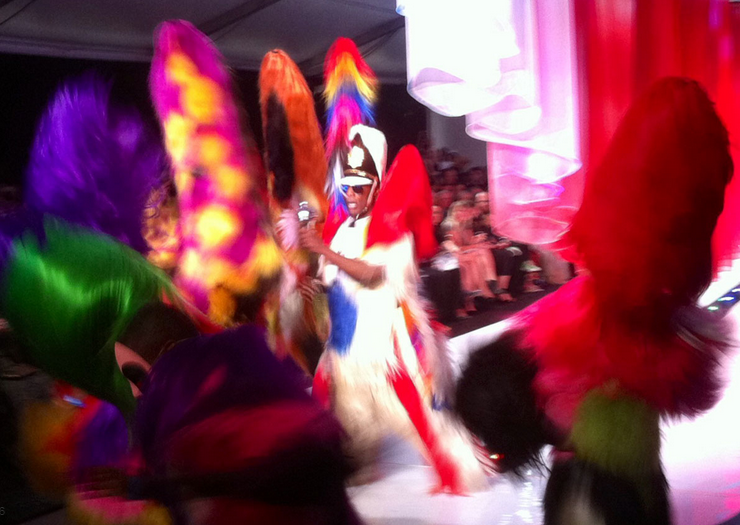 In Detroit, he will launch his largest performance series ever. His Soundsuits will unexpectedly invade the city for a series of photo shoots; he will stage Dance Labs in partnership with the Museum of Contemporary Art Detroit (MOCAD); he will work with LBGTQ youth and young adults from the Ruth Ellis Center to create Up Right Detroit, a performance filmed in the city; and he will engage students from the Detroit School of Arts and the Detroit RiverFront Conservancy to produceHeard•Detroit, a procession of as many as 30 life-size horse sculptures operated by 60 high school dancers who will parade along Detroit’s riverfront. Cave’s project will culminate at the end of the exhibition in October, when the artist will stage Figure This: Detroit, a massive public performance at Detroit’s Masonic Temple. 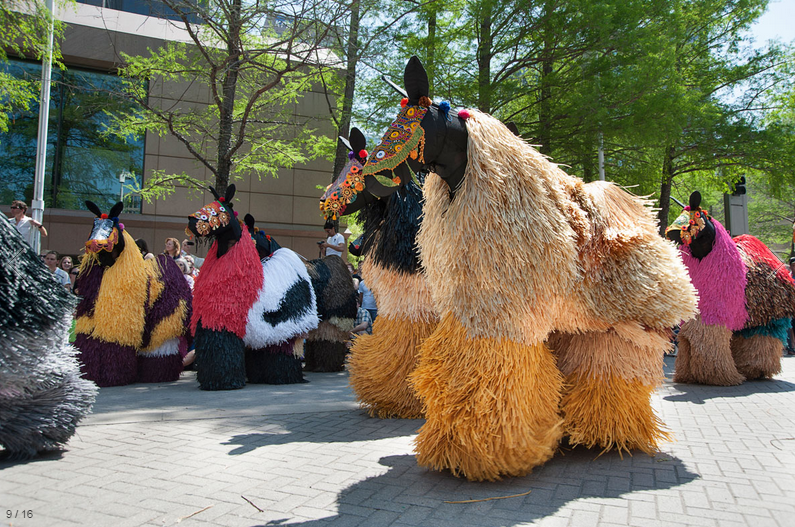 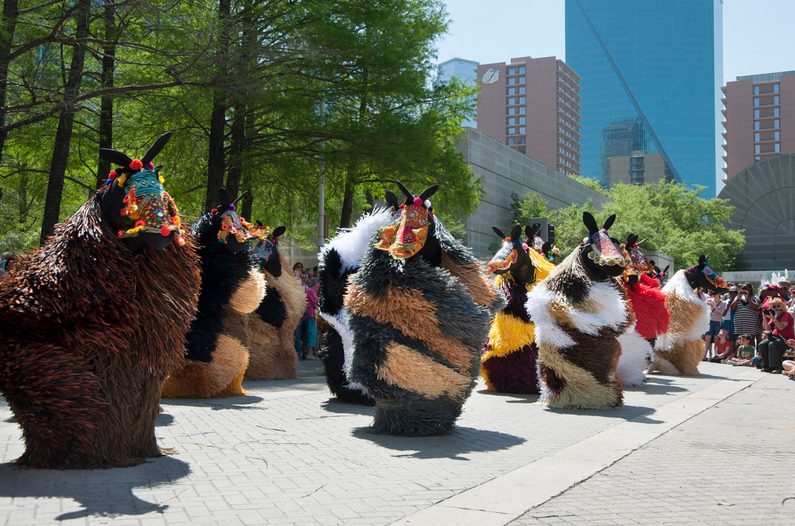 Cranbrook Art Museum is serving as the producer for the entire Nick Cave project, and will be home to the exhibition Nick Cave: Here Hear, that will include a 7,000-square-foot exhibition of Soundsuits, recent sculptures, and newly commissioned artworks. The exhibition will be on view from June 20 through October 11, 2015. A full weekend of celebrations are planned for the exhibition opening, including a film screening and block party performances in Detroit’s Brightmoor community on June 21. Nick Cave: Here Hear is curated by Laura Mott, Curator of Contemporary Art and Design at Cranbrook Art Museum.

To fully experience the world of Nick Cave, click on these videos…

Nick Cave is an artist, educator, and foremost a messenger, working between the visual and performing arts through a wide range of mediums including sculpture, installation, video, sound, and performance. He says of himself, “I have found my middle and now am working toward what I am leaving behind.” Cave is well known for his Soundsuits, sculptural forms based on the scale of his body. Soundsuits camouflage the body, masking and creating a second skin that conceals race, gender, and class, forcing the viewer to look without judgment or preconception.In a 2013 feature in Interview Magazine, Cave said of his projectHEARD•NY, a large scale performance in Grand Central Terminal organized by Creative Time, “I was really thinking of getting us back to this dream state, this place where we imagine and think about now and how we exist and function in the world. With the state of affairs in the world, I think we tend not to take the time out to create that dreamspace in our heads.” This is relevant to his practice as a whole.

Cave has received several prestigious awards including: the Joan Mitchell Foundation Award (2008), Artadia Award (2006), the Joyce Award (2006), Creative Capital Grants (2002, 2004, and 2005), and the Louis Comfort Tiffany Foundation Award (2001). Cave, who received his MFA at the Cranbrook Academy of Art in 1989, is Professor and Chairman of the Fashion Department at the School of the Art Institute of Chicago.

Nick Cave has been represented by Jack Shainman Gallery since 2006 when he had a show entitled Soundsuits. Other solo exhibitions at the gallery include Recent Soundsuits (2009), Ever-After (2011) and a two-part exhibition Made by Whites for Whitesand Rescue (2014). 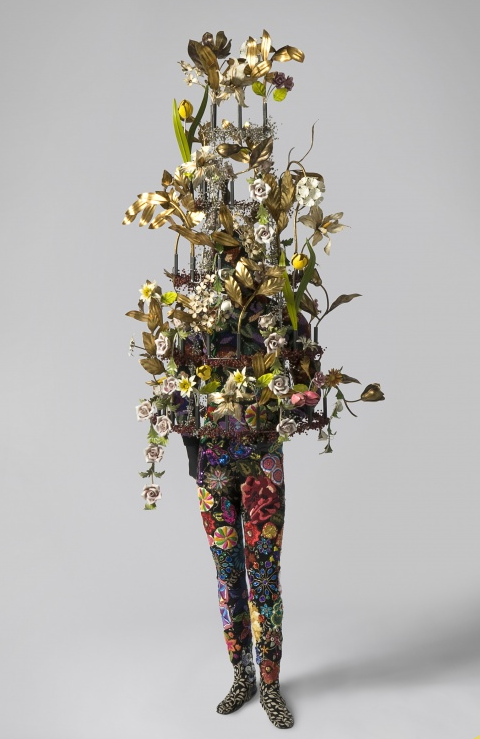 To see one of the soundsuits locally, be sure to check out this one at our own Mint Museum.