A PISCEAN POOL PAVILLION: DESIGN FOR THE SIGNS

“And here fantastic fishes duskly float/ Using the calm for waters, while their fires/ Throb out quick rhythms along the shallow air.”

I had such fun designing for Aquarius that I wanted to design a space for my own birth sign this month. To all of my dear Piscean pals, this post is dedicated to you! 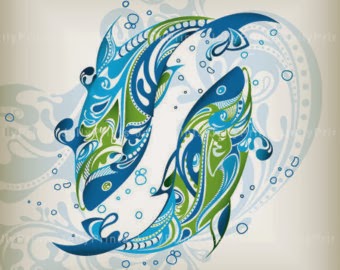 “Imaginative, intuitive and sensitive, Pisces is a chameleon who isn’t afraid to mix up different styles. She needs space to meditate and express her creativity. Watery hues like blue and green serve as a backdrop for her dreamy space that opens to the outdoors. Pisces hate feeling trapped in a space, so they need a lot of natural light. Always surrounded by pretty things, Pisces instinctively knows where each piece should be displayed. Works of art fulfill her artistic side.”- www.styleathome.com 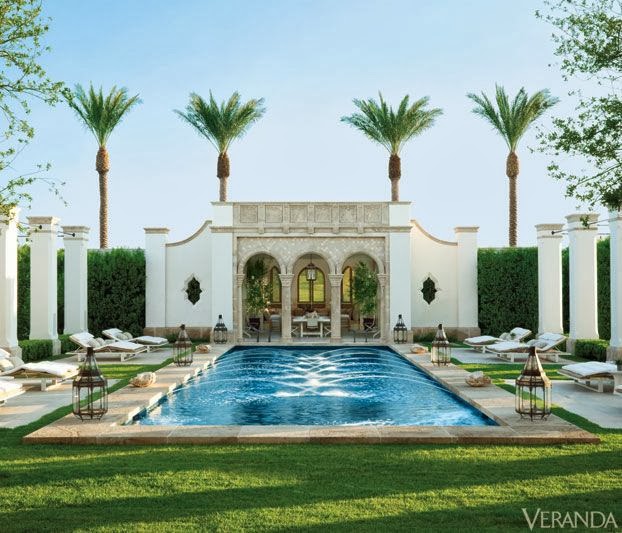 Before I could start scheming, I had to envision the perfect backdrop for my Piscean Pool Pavillion. This architectural beauty was designed by Richard Hallberg and featured in Veranda. 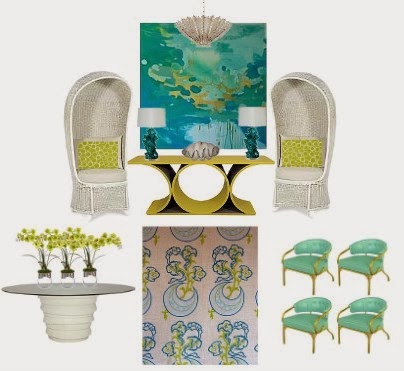 I always begin with the art.  This work by Michelle Armas captured the Piscean spirit perfectly.  Michelle describes her work ,“I paint what I want to look at while building layers, texture and pattern. Graffiti and ethnic woven textiles inspire my work. When I paint I think about what it’s like to move around the canvas, and lately a lot of the names for my paintings are song lyrics.” She is represented by Gregg Irby Fine Art. A stylized fabric from Katie Ridder complemented the painting beautifully. The next find was this Karl Springer console from 1st Dibs that brought out the citrine from the painting and the fabric. Scrolling through 1st Dibs also revealed these fabulous curved back mid century brass chairs upholstered in aquamarine leather. White high back wicker chairs from Palecek and a sculptural dining table from Janus et Cie balance out the blues and greens of the pavilion.

“It’s a pair of Fish that represents Pisces, a symbol that prompts others to suggest that these people ‘go with the flow’ and ‘don’t make waves.’ Both of these labels are true, since Pisces are fluid and easy-going, in keeping with the Mutable Quality assigned to this sign. The fact that two fish (as opposed to one) represent the members of this sign also speaks to the duality of Pisces, their yin and yang sensibility. Pisces alternate between reality and non-reality in keeping with their introspective natures; their voyage between consciousness and an unconscious dream state says much about their intuitive, almost psychic natures. For this reason, Pisces can be hard to pin down, prompting some to call them the chameleons of the zodiac. The Fish are happy to be considered hazy, since there’s a certain sense of safety in that self-proclaimed netherworld. That said, they won’t stay away for long, since one of their primary goals is to help others. Pisces are compassionate, charitable and will quickly put the needs of others ahead of their own. The flip side to their giving natures is that the oft-timid Fish are likely to be taken advantage of by less well-meaning souls.

Pisces is ruled by Jupiter and Neptune. In ancient Roman mythology, Jupiter (the original ruler of Pisces) was the king of the gods, while Neptune was the ruler of the seas. Those born under this sign are spiritually oriented and charitable. They are compassionate, easily feeling another’s pain. At times, however, Pisceans can have difficulty distinguishing fact from fantasy; they tend to get caught up in their dreams and views of how things should be. To say they wear rose-colored glasses isn’t much of a stretch. Many Pisces also immerse themselves in the arts and other creative pursuits as a centering mechanism, and they are quite talented in these areas.

The Element associated with Pisces is Water. Those born under this sign easily relate to the emotional and unpredictable nature of this liquid gold. Pisces feel a great deal, and they also feel misunderstood much of the time. They’re not quite pushovers, but they’re certainly sensitive. Yes, they could cry you a river if the circumstances were right. Even so, they revel in their compassionate and imaginative natures and love to cater to others. They can also be quite romantic, dreaming up delicious treats for their lover. Hopefully, any kindness will be reciprocated, because the Fish can certainly turn blue if they’re not. Pisces are generally gentle, easy-going folk, who are on the shy and reticent side. They are modest to the point of impracticality, often stepping up only to show their talents in painting or music. Easiest for the Fish (and still great fun) is living in their lush dream world.

More relaxation for the Fish comes in the way of sports, specifically water sports. Pisces loves to swim, and it’s this easy glide in a pool or the sea that serves to alleviate much of their stress.

The great strength of the Pisces-born is their compassionate and charitable nature. These folks love to help others and do so in the most imaginative of ways. It’s their feeling sensibility that wins people over.” –www.astrology.com