Article and images via Architectural Digest…

While you are watching Hollywood’s biggest night of the year, be sure to take note of the fabulous Architectural Digest Green Room! Over one billion film buffs, fashionistas, and design lovers will be tuned in as well….ENJOY! 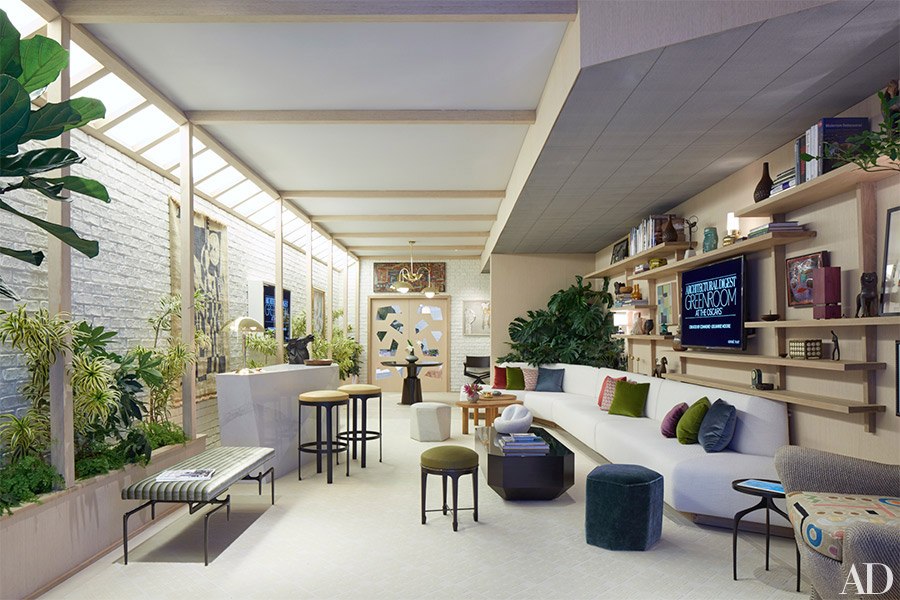 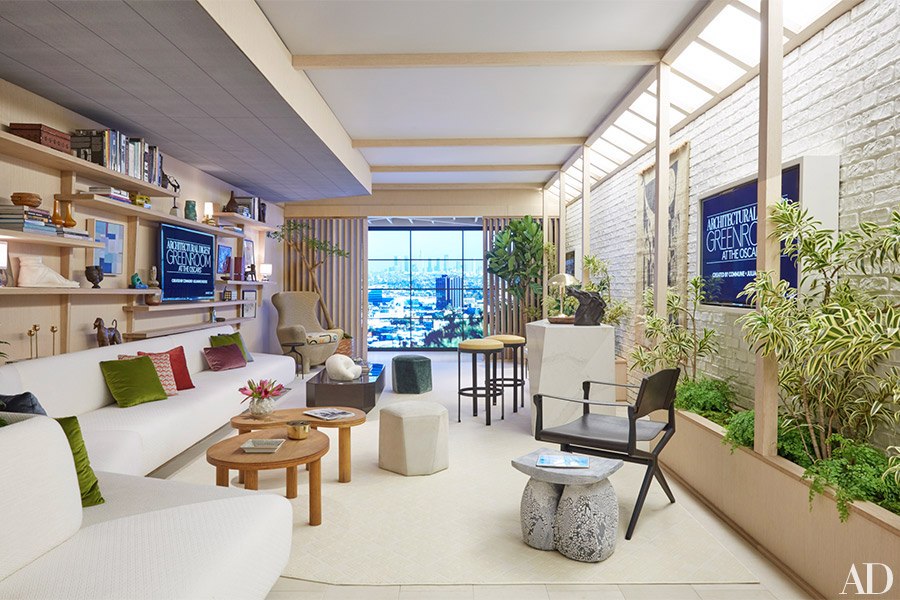 With a nod to the iconic designs of the 1950s and ’60s, the Greenroom features a picture window composed of 16 Samsung LED displays that stream a sweeping view of L.A. from atop the Hollywood Hills as the city changes from day (shown) to night. 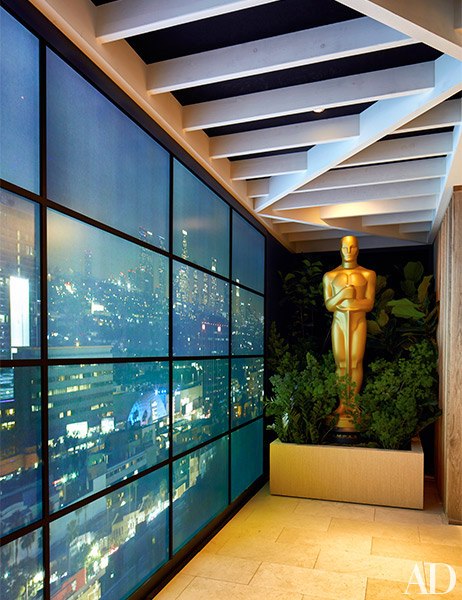 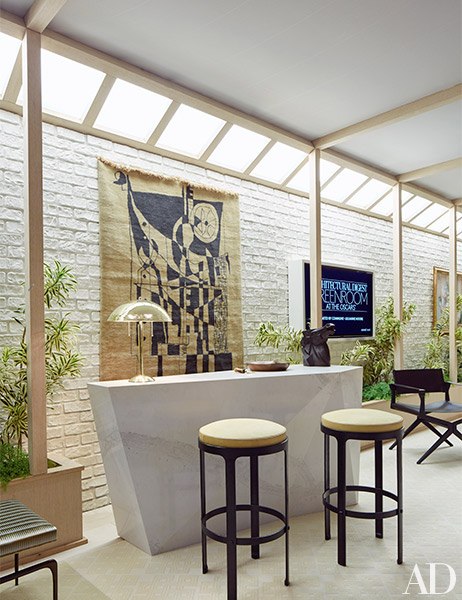 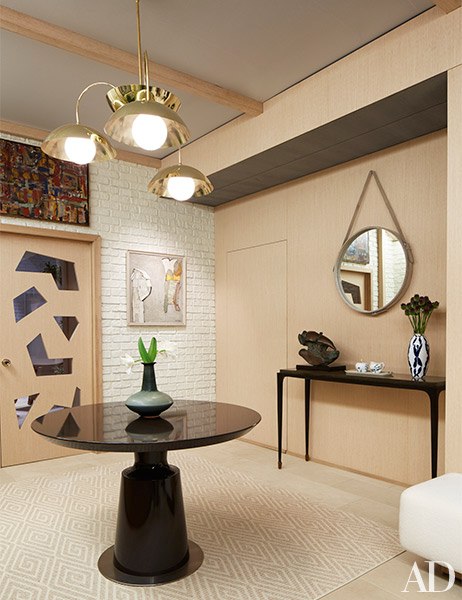 The Greenroom’s custom-made doors are inspired by the designs of Frank Lloyd Wright and are accented with Emtek hardware. This section of the Greenroom is outfitted with a Holly Hunt Studio table, a custom-designed chandelier from Remains Lighting, and Bernardaud porcelain on the console table. 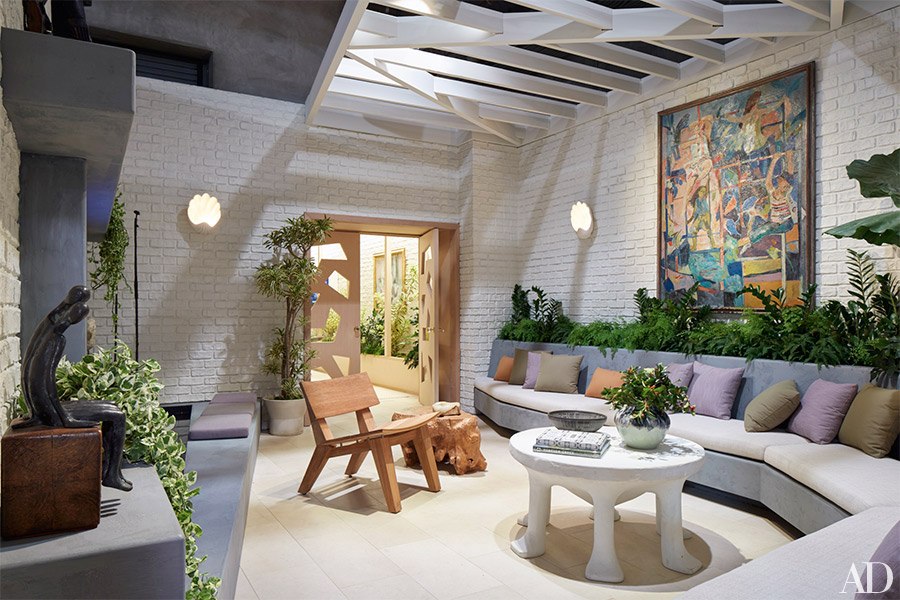 1
Number of dollars for which an Oscar winner or his estate must offer to sell his statuette back to the Academy of Motion Picture Arts and Sciences before selling the statuette on his own. Oscars awarded after 1950 are bound by this agreement, and statuettes are considered property of the Academy unless it waives its ownership. Oscar Welles’s 1941 Oscar for “Citizen Kane” was sold at a 2011 auction for over $800,000.

2
Number of words in the shortest Oscars acceptance speech ever, delivered by Patty Duke in 1963 after winning the Best Supporting Actress statuette for “The Miracle Worker.” Her message? Simply, “Thank you.”

4
The most Best Director wins by one person, a record held by John Ford since 1953, when he won his last statuette for “The Quiet Man.”

5.5
Length in minutes of the longest Oscar acceptance speech ever given, a distinction held by Greer Garson, who won Best Actress in 1943 for “Mrs. Miniver.”

8
Highest number of acting nominations without a win, a record held by the late Peter O’Toole. He was awarded an honorary Oscar in 2002.

10
Number of musicals that have won Best Picture. The last one to do it was 2002’s “Chicago,” which ended a 34-year drought. 1968’s “Oliver!” preceded “Chicago”‘s win, but the Academy took a hard turn away from song-and-dance features with its subsequent Best Picture selection: “Midnight Cowboy” (1969), which remains the only X-rated film to claim Oscar’s biggest prize.

11
Highest number of nominations for a film that did not win any Oscars. Two films share that dubious distinction: “The Turning Point” (1977) and “The Color Purple” (1985).

12
The highest number of Best Director nominations received by one person. William Wyler holds that record, converting three of those nominations into wins.

12
The number of Oscar categories that have been eliminated over the years. They include Best Dance Direction, Best Short Film — Live Action — Two Reels, and Best Unique and Artistic Quality of a Production. (That latter wordy category was part of the first Academy Awards ceremony in 1929, and ditched the following year.)

15
Length in minutes of the first — and to this day, shortest — Academy Awards ceremony, held on May 16, 1929 at the Hollywood Roosevelt Hotel in Los Angeles. Awards (the nickname “Oscar” didn’t come into being for several years) were handed out in 12 categories. Today, Oscars are awarded in 24 categories, and ceremonies typically run three hours on average. (Many far exceed that running time.)

17
Highest number of hosts for one Oscars telecast. For several years, the Academy used a gimmick dubbed “Friends of Oscar” that featured a roster of rotating hosts for each ceremony. The broadcast featuring the most “Friends” took place on April 7, 1970, and included stars like Bob Hope, John Wayne, Barbra Streisand, Fred Astaire, Clint Eastwood, James Earl Jones, and Elizabeth Taylor. Packing in so much star power paid off for the Academy: the broadcast was the Awards’ highest-rated telecast of all time.

18
Highest number of acting nominations for a single person, a record held by Meryl Streep. Streep broke the previous record of 12, set by Katharine Hepburn. Jack Nicholson is the most nominated male actor, currently tied with Hepburn’s 12.

19
Highest number of Oscar ceremonies hosted by one person. Bob Hope is the champ (he also hosted the first televised Oscars in 1953), with Billy Crystal a distant second with nine hosting gigs.

20
Most nominations for a single person in any category without a win. Sound re-recording mixer Kevin O’Connell began his unsuccessful quest for an Oscar with his first nomination in 1983; his most recent letdown came in 2007.

21
Composer Victor Young has O’Connell beat in the most depressing distinction category: Young was nominated 21 times before finally winning an Oscar for 1956’s “Around the World in 80 Days,” earning him the title of most nominations before a win. Unfortunately, Young died before the Oscar ceremony took place, and the award was granted posthumously.

22
Number of times that the Best Picture and Best Director Oscars have gone to different films. The most recent split came in 2013, when Ang Lee won Best Director for “Life of Pi” and “Argo” (directed by non-nominee Ben Affleck) took Best Picture. For more analysis of this Oscar anomaly, check out Moviefone’s extensive coverage here.

35
Highest number of nominations earned by a woman in any category. Costume designer Edith Head holds that title; she won eight statuettes throughout her career.

45
Number of seconds that Academy rules stipulate acceptance speeches must not run over. (This rule, established in 2010, is broken multiple times every year.)

59
Highest number of nominations for a single person in any category. Over-achiever Walt Disney holds that title. Composer John Williams is the most-nominated living person, with 49 nods under his belt.

94
Length in minutes of the shortest Best Picture winner ever, “Marty” (1955). Brevity seems to be a theme for this classic flick: the 1956 ceremony where it claimed the top prize was the second-shortest Oscars ever, lasting just 90 minutes.

224
Length in minutes of the longest Best Picture winners ever: a tie between “Ben-Hur” (1959) and “Gone With the Wind” (1939). But the latter has a slight edge when its score is factored in: including its overture, intermission music, and exit music, “Gone” clocks in at 238 minutes.

6,000
The approximate number of voting members of the Academy of Motion Picture Arts and Sciences, which determines the Oscar nominees and winners. It’s made up of separate branches composed of different film disciplines, including acting, writing, and directing. 276 people were invited to join the Academy in 2013, though the number of new members changes annually.

31.76 million
Number of viewers for the lowest-rated Oscars telecast ever, which took place on February 24, 2008. Despite the Academy celebrating its 80th awards, the show pulled in a dismal 18.66 share of the ratings, thanks in part to its low-wattage winners. (Best Picture champ “No Country for Old Men” wasn’t a big box office draw, prompting fewer viewers to tune in.)

57.25 million
Number of viewers for the second-highest rated Oscars telecast ever, when “Titanic” took home Best Picture and Billy Crystal hosted on March 23, 1998. The exact number of viewers for the highest rated ceremony — which took place on April 7, 1970, when “Midnight Cowboy” won the top prize — are not available, but the program pulled in a whopping 43.40 share of the Nielsen ratings. (In comparison, 1998’s ceremony had a 35.32 share.)

1 billion
Number of worldwide viewers that the Academy has claimed in the past watch the Oscars every year. This number has been widely disputed, though, and with the recent trend in waning viewership, it seems even more suspect today