Cherry blossoms have been a source of inspiration for artists and designers for centuries. The most famous cherry blossoms in our country celebrate their 100th birthday next week.

On March 27, 1912, First Lady Helen Taft and Viscountess Chinda, wife of the Japanese ambassador, planted the first two trees from Japan on the north bank of the Tidal Basin in West Potomac Park. 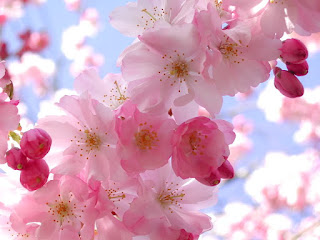 The United States Government reciprocated with a gift of flowering dogwood trees to the people of Japan in 1915. A group of American school children reenacted the initial planting and other activities, holding the first “festival” in 1927. 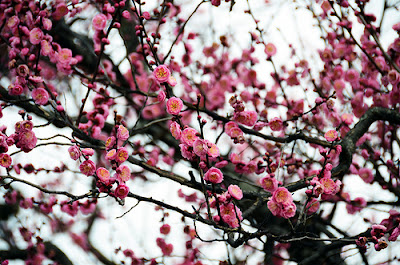 First Lady Lady Bird Johnson accepted 3,800 more trees in 1965. In 1981, Japanese horticulturists were given cuttings from the trees in DC to replace some cherry trees in Japan which had been destroyed in a flood. This year, the United States plans to send another 3,000 seedlings to commemorate the anniversary. 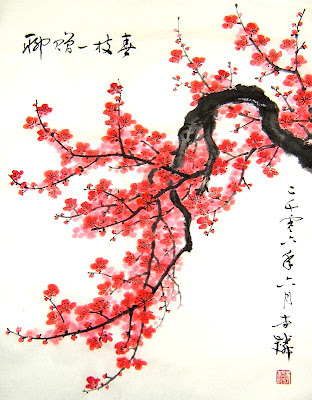 I have always wanted to have a mural of cherry blossoms somewhere in my house. When we moved into our house three years ago, I finally had the blank canvas I needed.  I looked at various scenic wallpapers trying to find the perfect depiction of cherry blossoms that I had envisioned. I love the negative space seen in Japanese block prints of cherry blossoms and wanted the same look.

While I adore all of the scenic wallpapers shown in these images, they were too decorative for the look I wanted.

This vignette above from Miles Redd was getting closer to what I had in mind.

The modern take from Fromethal on the scenic wallpaper is outstanding.

At last I found what I wanted. In an old copy of Domino Magazine, I discovered a small image of this mural from the Stanton Social restaurant In New York. There was plenty of negative space and it even had the “dirty pink” color that I have used throughout my house.

I showed some images to the incredibly talented artist Terry Reitzel and he created this….. 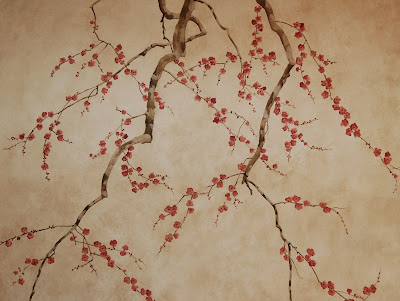 Finally, my mural is complete! Each wall is its own canvas that measures 10′ high by 15′ long.  Terry stretched each canvas out in his studio to be painted.  Once the paint was dry, it was taken off of the stretcher and rolled up before installation. 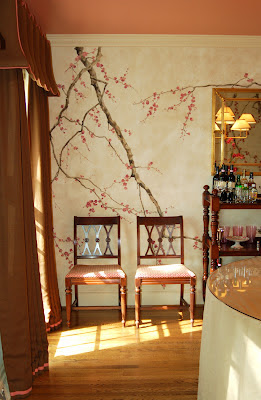 The walls were sized and then lining paper was applied to protect the mural. Then, the installers size the mural and hung it loosely in place overnight.  The canvas had to shrink with the sizing on the back before it could be smoothed onto the wall. It took an entire week to get everything in place. 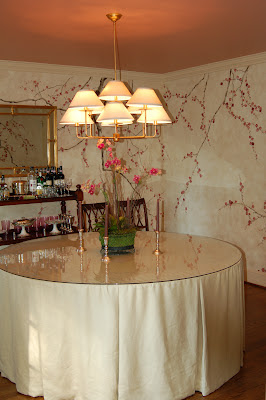 Once the mural was installed, Terry came back to finish up the corners, painting branches, blossoms and buds to wrap around the room. The ceiling was painted dirty pink to highlight the blossoms…which are actually plum blossoms, not cherry blossoms. They are more vibrant and bloom before the cherry trees. 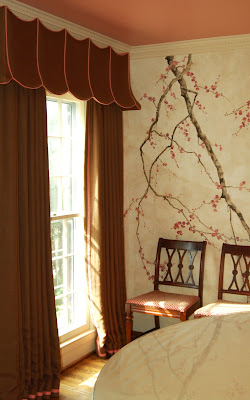 I designed these pagoda-shaped upholstered pelmets and drapes to tie in with the chinoiserie theme.  I have been waiting three long years for this to be completed and it surpassed every expectation I had thanks to the brilliant Mr. Reitzel!