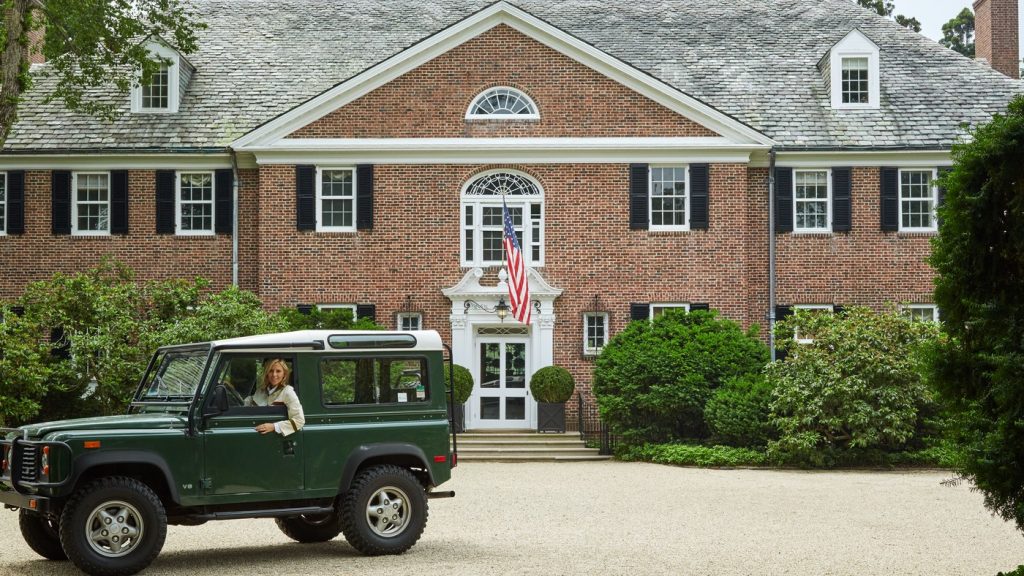 The design world was all aflutter yesterday as AD published the first images of Tory Burch’s stunning 1929 Georgian Southampton home. For the past nine years, the home set on seven acres has been thoughtfully decorated under the brilliant eye of interior designer Daniel Romualdez. Together, Tory and Daniel have a quite a history….designing over 200 stores for her iconic brand while working on this 15,000 square foot project.

Their philosophy of designing over time with layers added resonated deeply with me as this is how I encourage my own clients to approach the design process. The combination of amazing art and beautifully proportioned spaces brimming with pattern and color perfectly reflects Tory’s aesthetic which is the ultimate goal for any home. Burch offers up the ultimate compliment for Romualdez,  “Daniel takes people’s taste and makes it better.”

Enjoy the gorgeous images, charming article by David Netto, and the hilarious video documenting a day in the life of Tory.  It captures the creative mind at work….stream of consciousness thinking and finding inspiration at every turn from Tupac and Tomatoes to LadyBugs and LaffyTaffy! 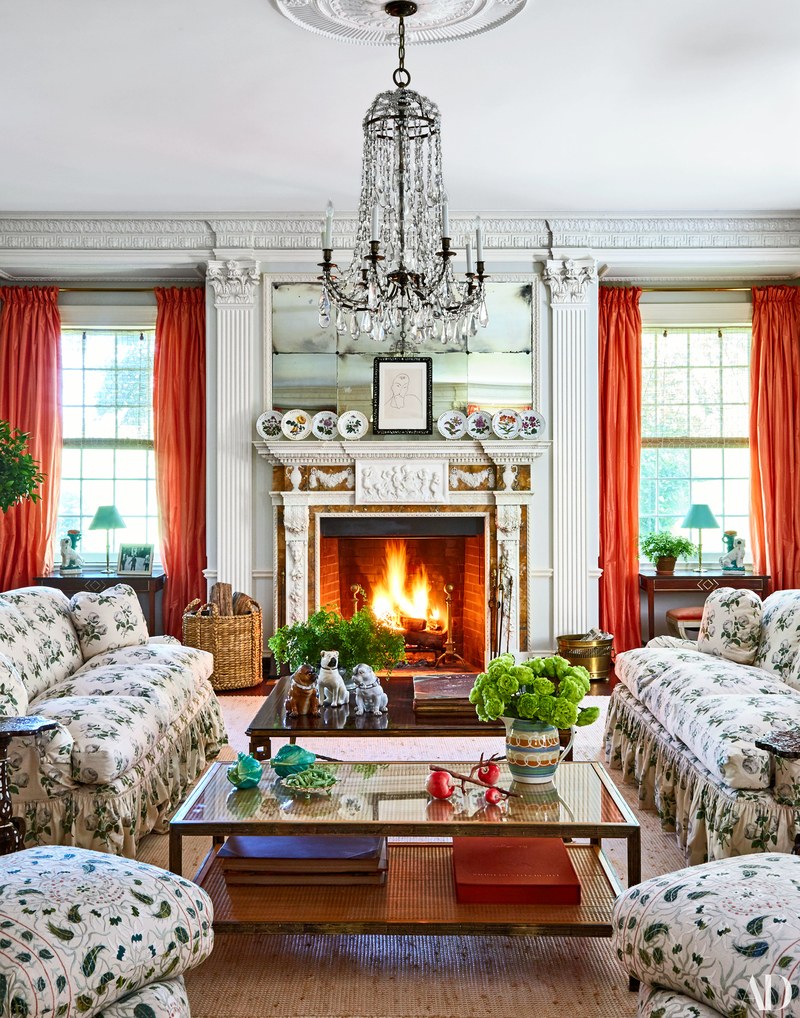 This is the kind of disarmingly pleasant thing one hears constantly about Tory Burch: She’s fun. She’s funny. She’s a great athlete. She loves children, even yours. She’s irreverent, informal . . . and so on. But when you roll up to the front door of Westerly, the enormous 1929 Georgian house in Southampton she bought nine years ago and has been decorating with Daniel Romualdez ever since, none of that seems possible. This is not by any outward appearance the house of someone who giggles—this is the house of the father-in-law you never wanted to meet, and who never wanted to meet you. Or the intimidating banker in a black-and-white movie you’d rather die than borrow money from. Think The Philadelphia Story and how that house reduces the hard-boiled journalists played by Jimmy Stewart and Ruth Hussey to blubbering bumpkins. 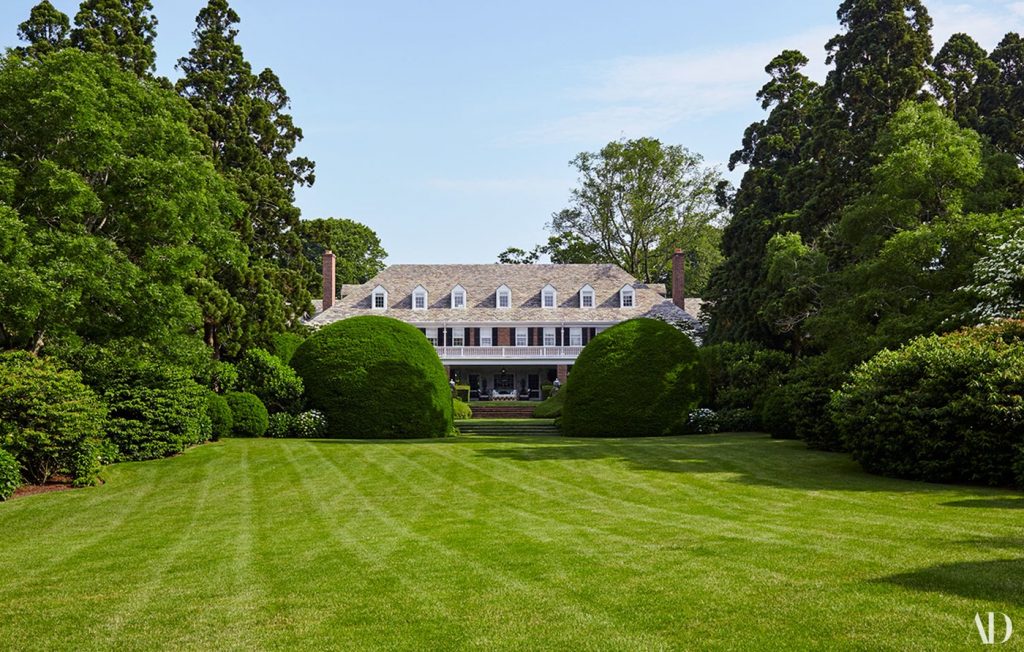 When Burch acquired the house in 2008, it was during the darkest days of the financial crisis, when pretty much no one was acquiring anything. She had intended to build a place on the water, and designs had been drawn and permits acquired. But when the statelier inland option came on the market, it inspired her to discard those plans and buy boldly. What Burch gave up in terms of water views she got back in scale, dignity, and seven acres of expansive gardens, today redesigned with achingly beautiful results by landscape architect Perry Guillot. 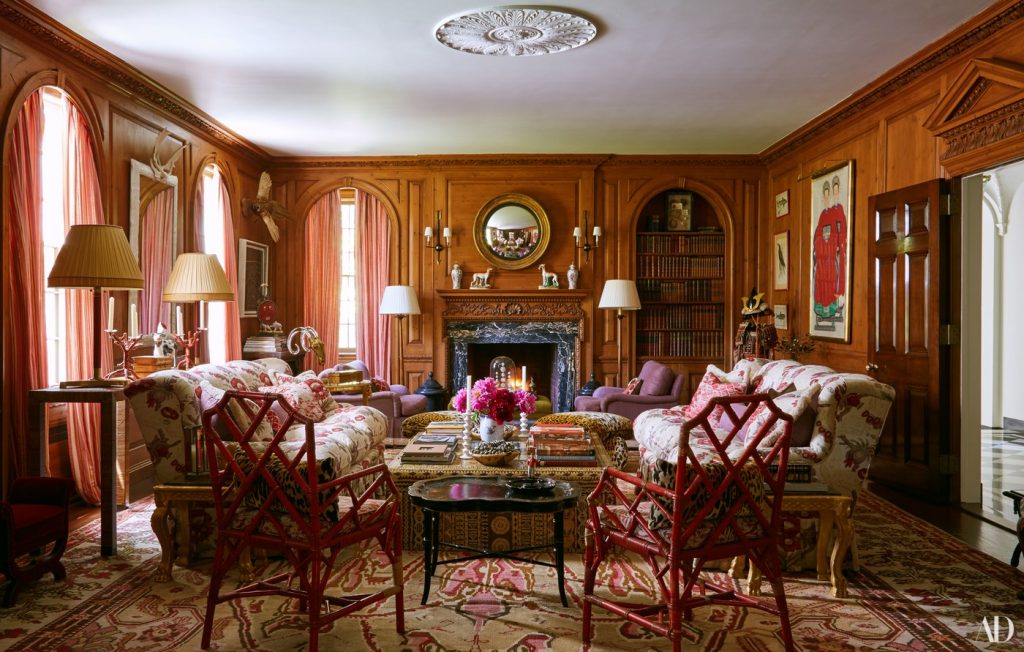 At 15,000 square feet, this has always been one of the biggest houses in Southampton. It is also, for the area, an unusually formal one: In the land of shingle and white-painted clapboard, Westerly’s red brick, black shutters, and slate roof stand out. Westerly also has reams of riotous folklore swirling around it, much of which emanates from the notorious 1963 debutante party thrown for Fernanda Wanamaker Wetherill (the real chandelier-swinging of that night did not actually take place here, but at an after-party), and her wedding five years later to Jamie Niven, son of the debonair movie star David, which packed the house with the likes of Lauren Bacall, Jason Robards, Gregory Peck, and every socialite from New York and Philadelphia. 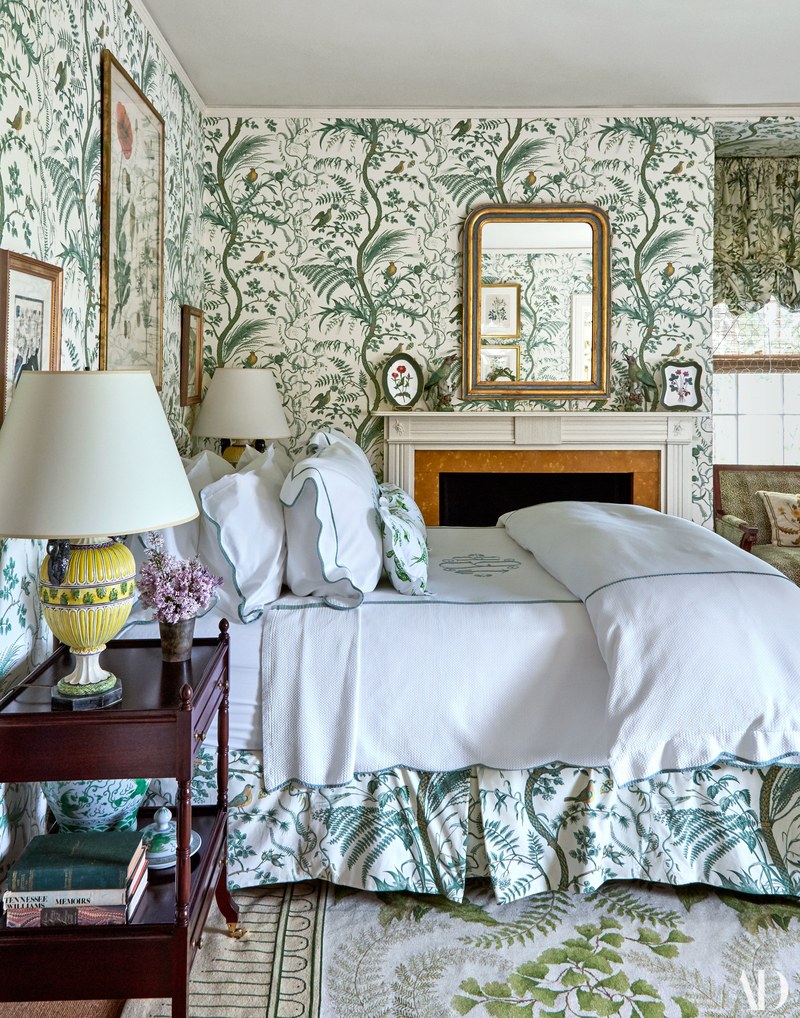 The bed and walls in a guest room share the same Brunschwig & Fils pattern. Bedding by Leontine Linens and D. Porthault.

So, don’t be intimidated—despite the scale, there is a tradition of fun here, and with it a certain sweetness. Fernanda W. Niven today has wonderful memories of the house: “On Saturday my mother had breakfast in bed, and everyone in the house’s trays were brought into her room. That was where the party started.” 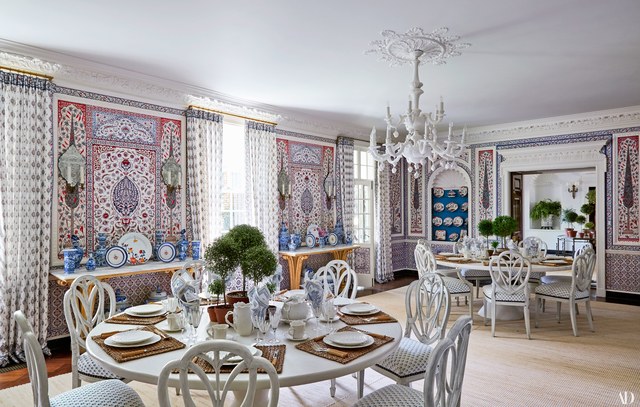 Quadrille paper covers the walls of the sunroom. A vintage Karl Springer linen-wrapped cocktail table sits on a rug by Stark. The sofa wears a Quadrille print.

If buying such a house might be overwhelming, decorating a property its size is a truly daunting proposition. “We didn’t start empty,” explains Romualdez. “I said to Tory, ‘This house is vast—let’s keep things until we find something we like better.’ ” They took small bites: Remember, most people in a position to do so today do not choose to live on this scale and look at running a house like Westerly as just a lot of work. Burch enjoys it. 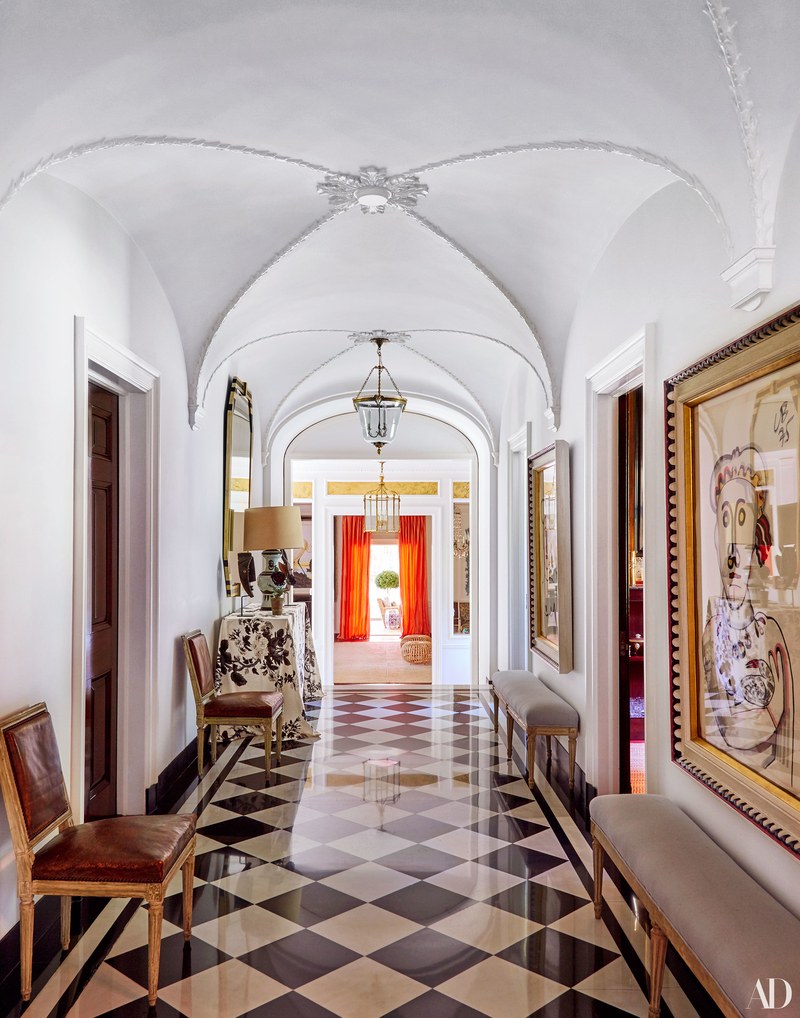 From the moldings to the black-and-white floor, original architectural details are front and center in westerly’s ground-floor hallway. Louis XVI chairs and benches.

Now that the house is basically complete, Romualdez explains that “the way Westerly has been decorated is the way a lot of those houses were done, before decorators played such a role.” What does that mean? Inherited furniture, personal style built on instinct, and a sense of patina built up over generations? Like an English country house, or maybe something in Maine? Exactly, says the designer. “Back in the era of the great American country house, from the 1890s to the 1920s, there was no storyboarding,” he notes. “It was much more organic.” When I ask if there was ever a moment in nine years that stumped him, Romualdez comes clean. “At some point, I started thinking we should just make that ballroom smaller, divide it into two rooms,” he recalls. Burch also continues to wrestle with the size of this room (50 by 25 feet) and confesses that she considers it something of a work in progress. At present it has been tamed with unlined melon taffeta curtains that billow and transmit light, and suites of comfy furniture upholstered in Colefax and Fowler’s classic 1938 Bowood print. There are some striking works of contemporary art by Walton Ford and George Condo, and a piano for good measure. I attempt to console them both with the news that in the Wetherills’ time this room was never even furnished, just sprinkled with a few ballroom chairs and used only for dancing. Sighs ensue, but too late—the work’s been done, and it’s already a beautiful room. 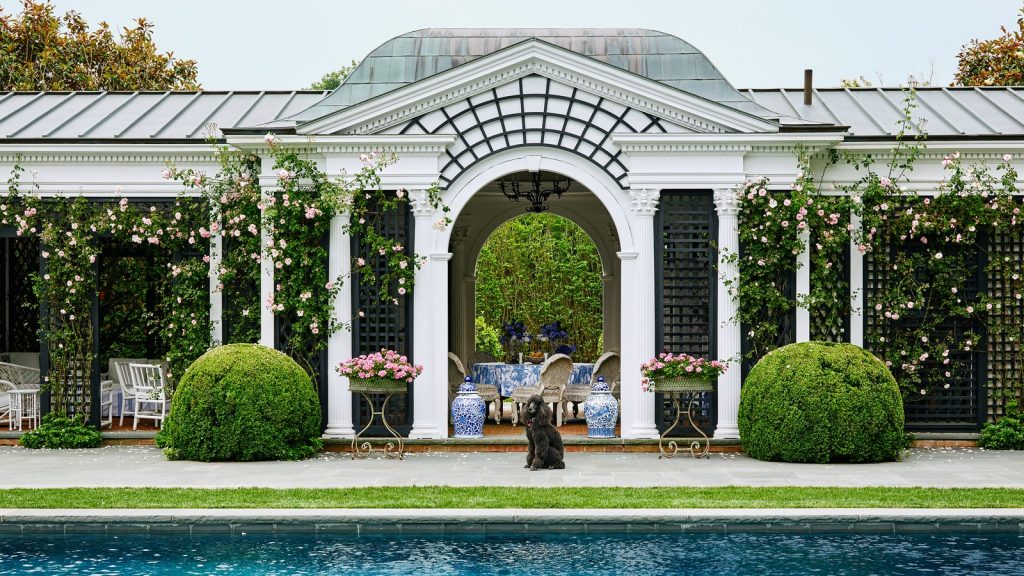 Lulu, a standard poodle, sits outside the poolhouse, festooned with climbing roses. 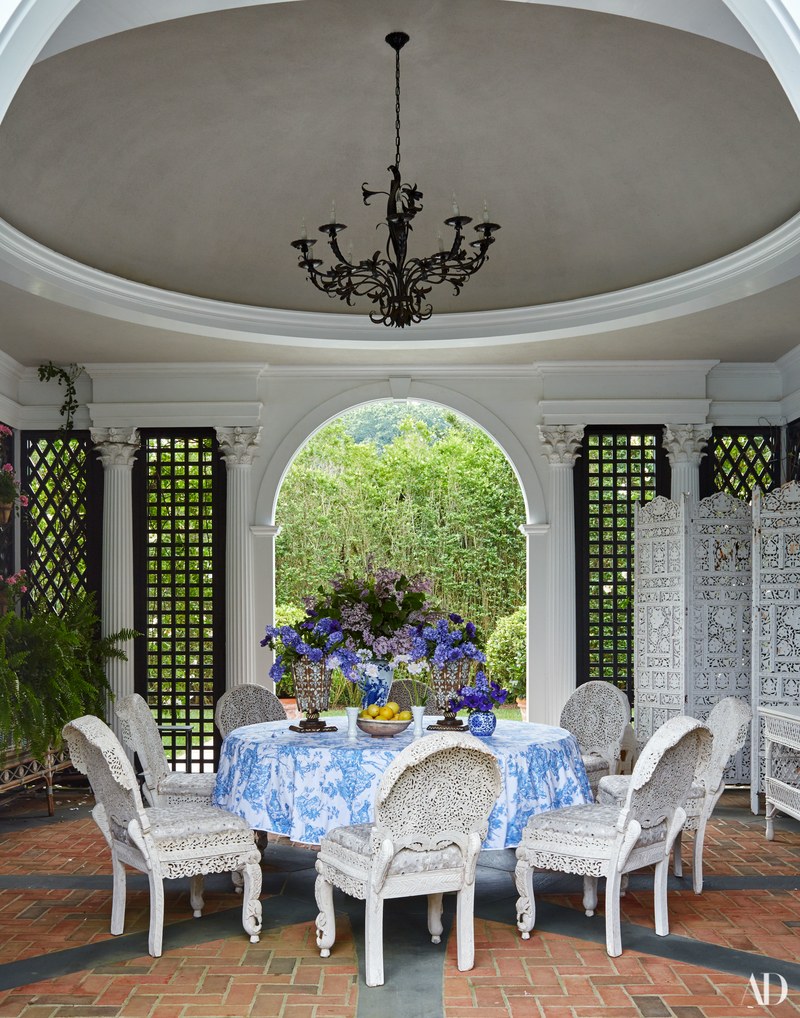 A D. Porthault tablecloth dresses the table in the poolhouse. Vintage chairs by Tony Duquette. 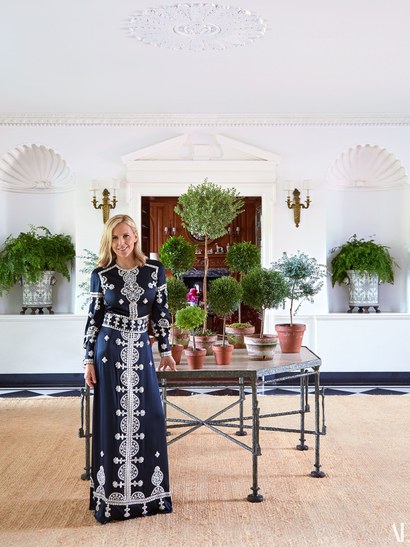 Tory Burch, in the sylvia gown from her fall 2017 collection, stands next to a celebrated Diego Giacometti table in the entrance hall. Carpet by stark.Hair by Tara Jarvis using Oribe, Christopher Robin, and Reverie. Makeup by Berta Camal for Artists and Company 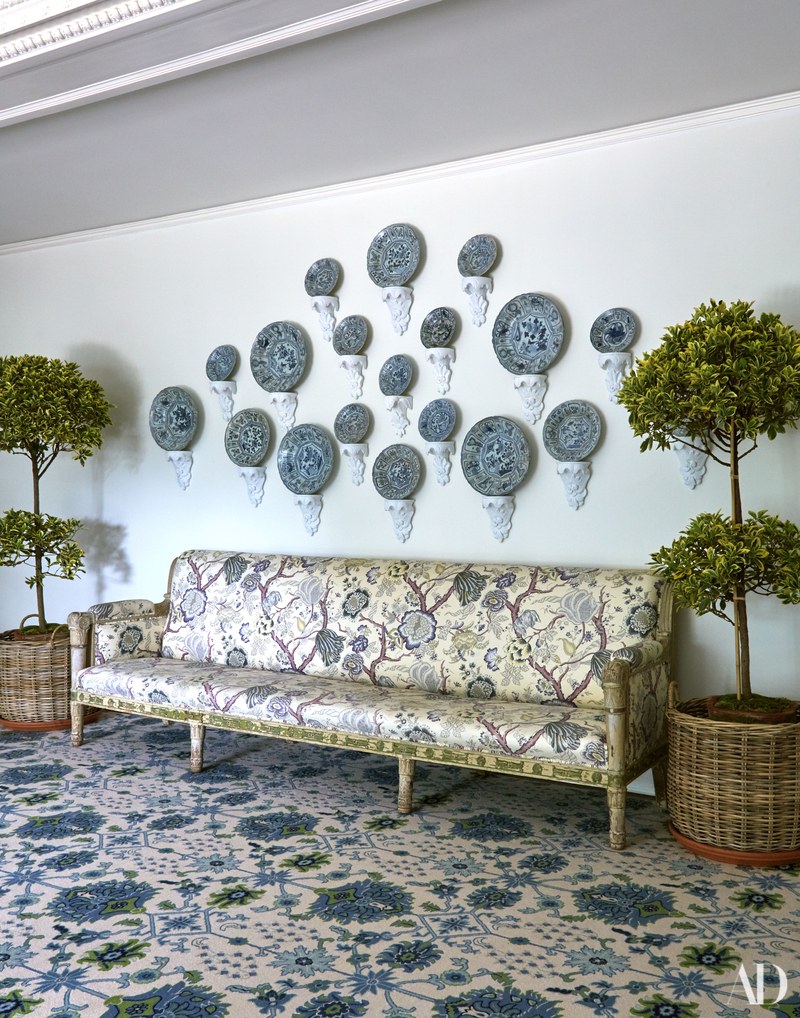 A set of 17th-Century porcelain plates salvaged from a shipwreck hangs above an Italian neoclassical sofa. Rug by Patterson Flynn Martin; baskets by Homenature.

If nine years sounds like a long time, keep in mind that while renovating this house, Burch and Romualdez have also been working on nearly 200 stores together. This is a serious level of collaboration, a little like a marriage, and as with any married couple the first question one wants to ask, of course, is “Have there been any fights?” Not that anyone remembers or is saying. Least of all the famously serene client: “Daniel takes people’s taste and makes it better” is Burch’s measured response. Romualdez admires the way she lives at Westerly as much as any of their aesthetic results. “I think this house is less ‘ironic’ than the stores,” referring to their zippy palette and general irreverence, “but the way she lives in it is. She is the most informal, unstuffy hostess I have ever been exposed to.” When pressed to describe any moment they might have disagreed on something, Burch has to think, but offers this: “We have a different take on color.” 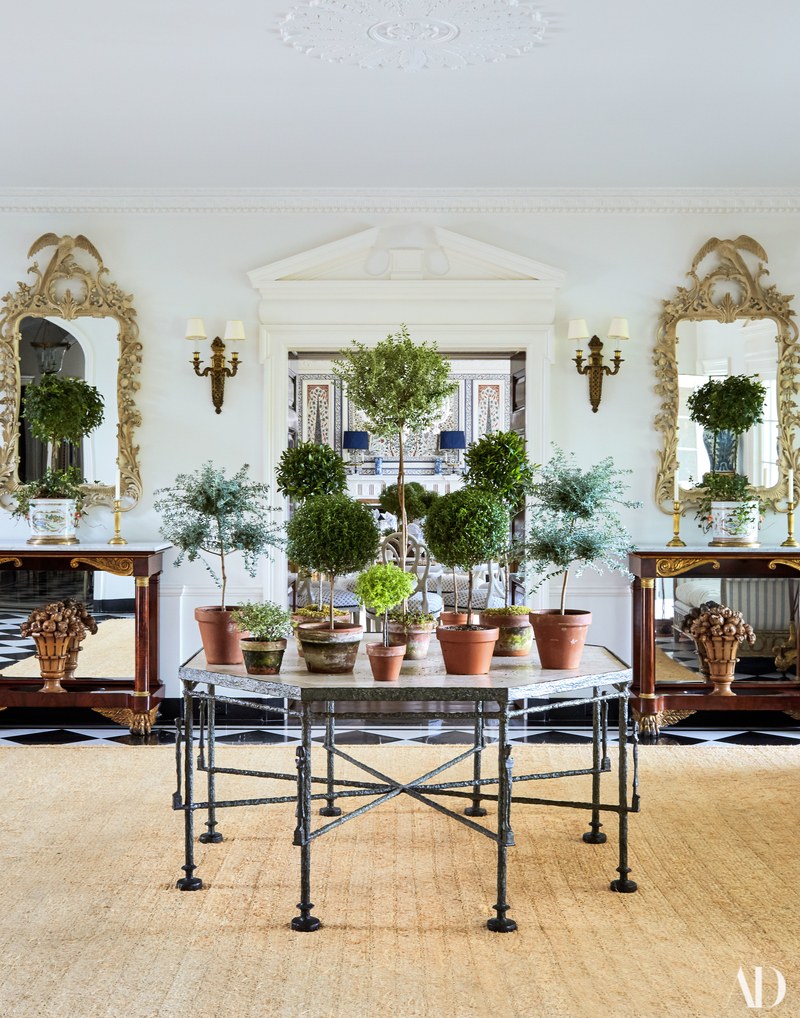 A Diego Giacometti table sits atop a Stark carpet in the entryway.

Even after all this time, the decorating—and collecting—continues. Not long ago the skirted table in the front hall was replaced by an octagonal bronze masterpiece by Diego Giacometti. The iconic piece was a favorite design of Hubert de Givenchy, who owned three versions. Burch is not specifically a collector of important furniture, but to those who are, this table is a legend, one of the great things one could ever own. Burch loved this work of art for its place in design history but confides that she pursued it not just for its beauty, but for personal reasons: Hubert de Givenchy reminds her of her late father. She’s leaning on it today in a tennis dress just the way she would any other table that might not be, as her friend Reed Krakoff describes it, “one of the great intersections of design and art.” This is chic and disarming. “I like the mix of high and low,” Burch says, smiling. “To me that’s what makes style interesting.” 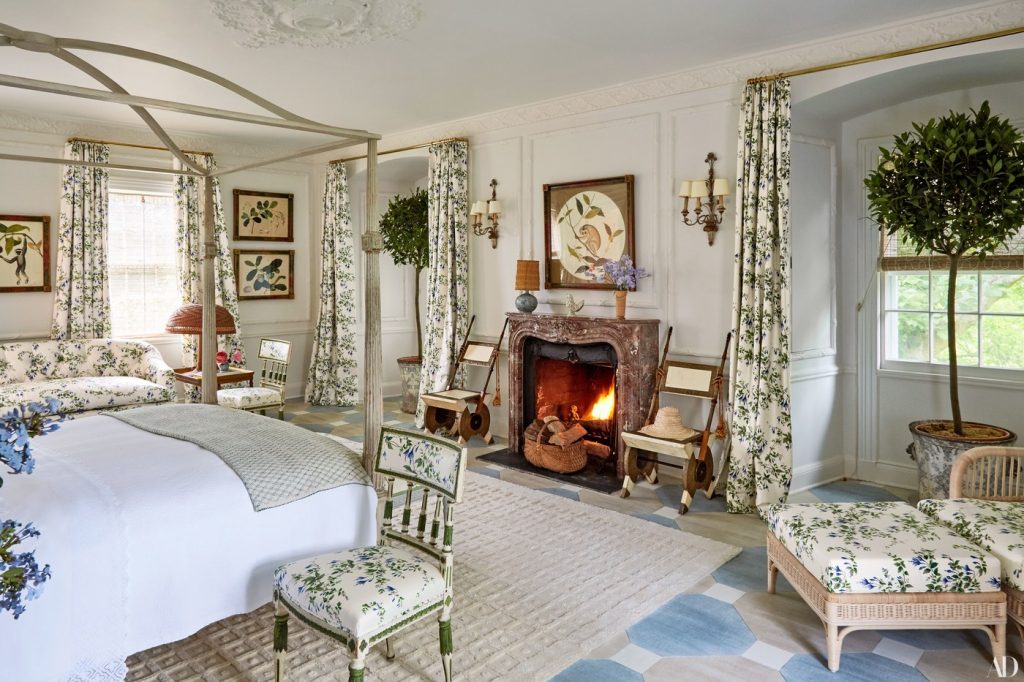 Rather than the opulent backdrop for leisure the house was built to be, Westerly now functions as something of a lab—a source of inspiration and a tool for conjuring ideas for her collections. The master bedroom upstairs—probably the room most people would have finished first—has only just been completed. With its pale faux-stone diamond pattern–painted floor and potted topiaries, Colefax and Fowler floral chintz, and framed botanical prints, it is overtly feminine and an enchanting homage to Bunny Mellon, whose fabled house in Antigua Burch recently bought and is decorating with Romualdez. But that high/low, beauty-by-contrast thread runs even here amid all this loveliness, in the surprise appearance of a pair of rare and theatrical Carlo Bugatti chairs flanking the fireplace—pieces one might rather expect to find in a room by Peter Marino than by Bunny Mellon. In decorating as in fashion, no guts, no glory.