Model and girl-on-the-go Poppy Delevingne puts down roots in a chic, light-filled house in a leafy London neighborhood 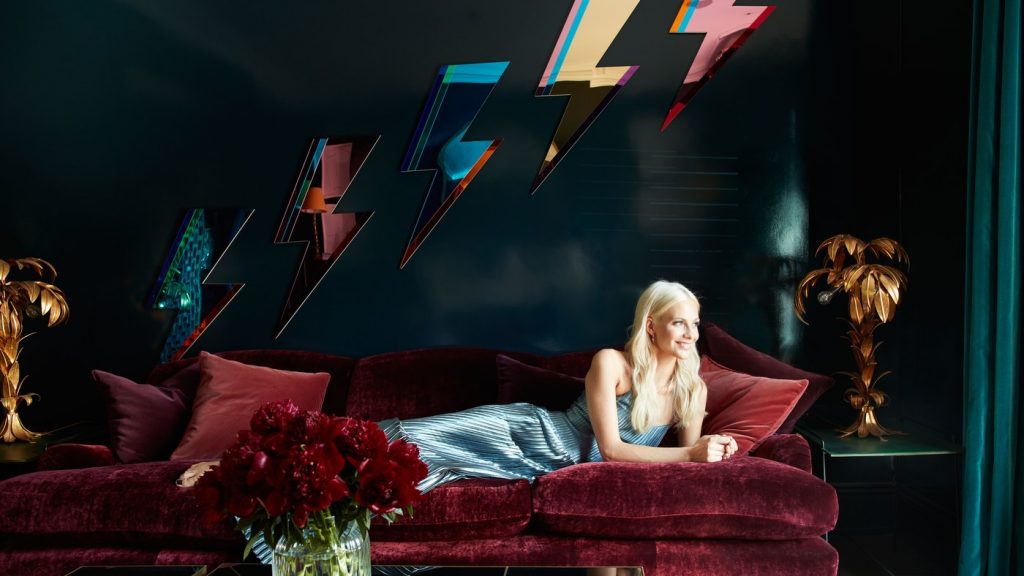 Poppy, wearing a dress by Huishan Zhang, in the sitting room. A custom sofa by Joanna Plant is upholstered in a garnet velvet by designers guild. Lightning mirrors by Bride and Wolfe; Hans Koegl Palm-tree Lamps.

I love it when Architectural Digest publishes interiors articles online before the actual magazine hits the stands.  It is the perfect teaser to anticipate what lies ahead in the upcoming issue. The November issue will feature the light filled London home of “It-Girl” Poppy Delavigne and her debonair husband James Cox. The home beautifully reflects the couple’s personalities with its eclectic mix of objects ranging from neon art and lighting shaped mirrors to banana leaf wallpaper and peacock chairs…also with a dash of pink mohair and beloved DeGournay wallpaper thrown in the mix.

Poppy, in an Alberta Ferretti dress, in the garden. Jute rug from the Conran shop.

Poppy Delevingne is the ultimate British It girl, a sassy blonde model and Chanel ambassador known around the world for being the life of the party. So fashion and society swells were shocked to hear that she and her husband, James Cook, the CEO of a British aviation company, had decided to take up residence in a cozy, family-friendly house on a blossom-lined street in Shepherd’s Bush, a residential neighborhood in West London. “Since moving in, I’d definitely say, I’ve become more of a homebody,” Poppy says. “We spend most of our time around the kitchen island, me cooking roast chicken—badly, by the way—and James pouring wine.” A mischievous smile crosses her face as she adds, “But friends come over and we end up dancing around, sometimes on the kitchen island, too!” Phew. 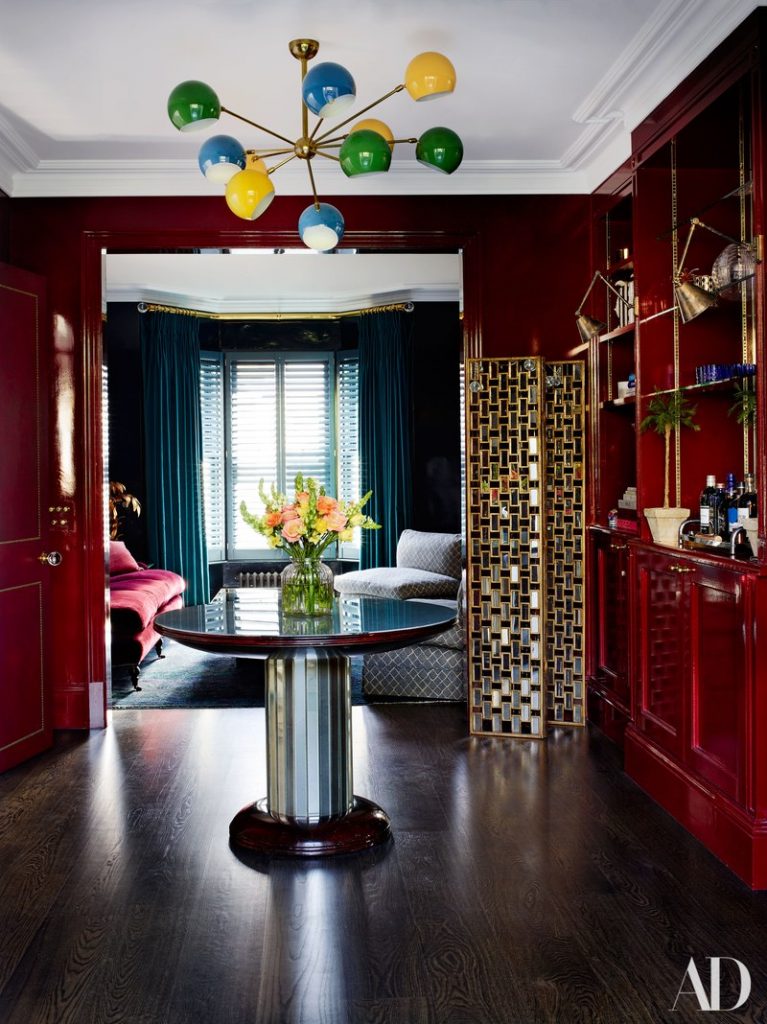 Papers and Paints’ Murrey red covers the walls of the bar. mirrored screen from Oka.

Poppy grew up a true London insider. One of her grandmothers was a lady-in-waiting to Princess Margaret; her mother, Pandora, was another girl-about-town in her early years (she’s now working on a memoir chronicling the ups and downs of those wild days); and her handsome father, Charles, a property developer, is as suave as an Englishman can get. And don’t forget her younger sister, top model and actress Cara Delevingne. The girls were raised in a comfy English family home in posh Belgravia, and Poppy was determined to find something similar for herself and James. (The couple married in 2014.) “I didn’t move out of my parents’ house till the grand old age of 28,” Poppy, now 31, says with a laugh. “I know: Pathetic!” 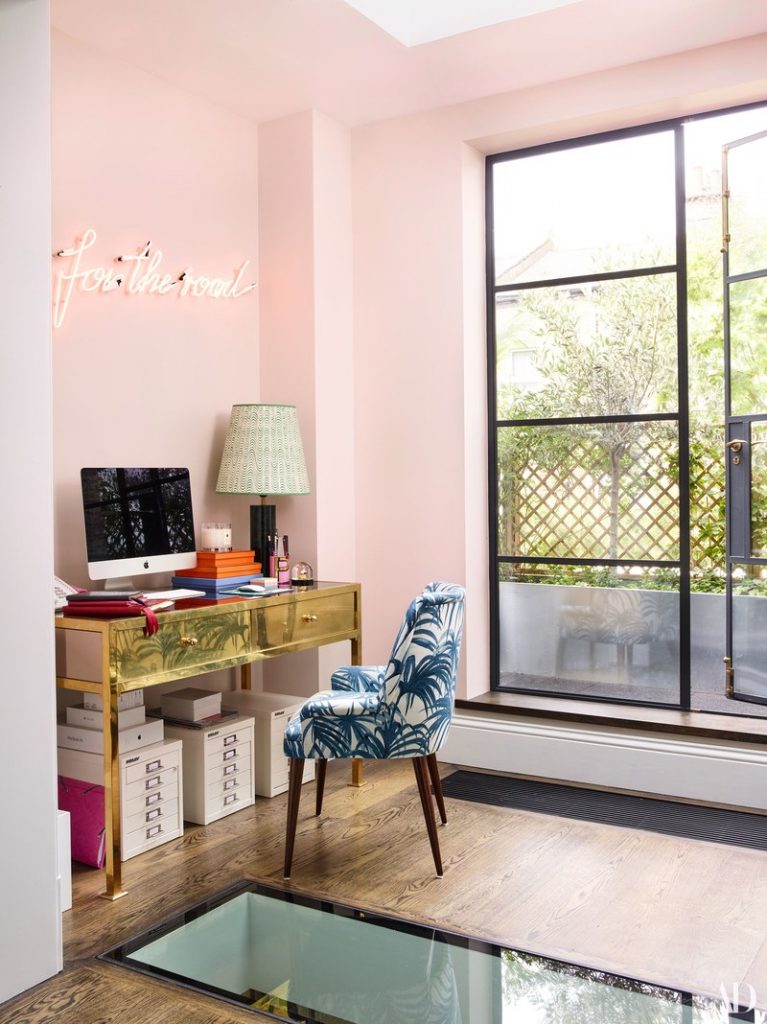 An opening in the study floor offers a view into the living room below. Custom neon sign; vintage brass desk; squiggle lamp-shade by Lucy Jane Cope; chair by Fiona Mcdonald in a house of Hackney fabric.

James was born in the city but grew up in the countryside, where the couple now spend half their time. So this house, only the second one they looked at before buying, is perfectly located for their town-and-country lifestyle. “We can get to our place in West Sussex in an hour, which is a miracle when it comes to London traffic,” Poppy says of her new neighborhood. Also, in quintessential English style, one last comfort tipped the scales: “It’s no coincidence that our favorite pub is a stone’s throw away. The Oak serves the best pizzas and pints in the city.”

They discovered the property by word of mouth. When one of the mothers on Poppy’s aunt’s school run mentioned her family was moving, the aunt passed along the intel and the couple knew that the house would be perfect. “It was a gut instinct and instant attraction,” James says. 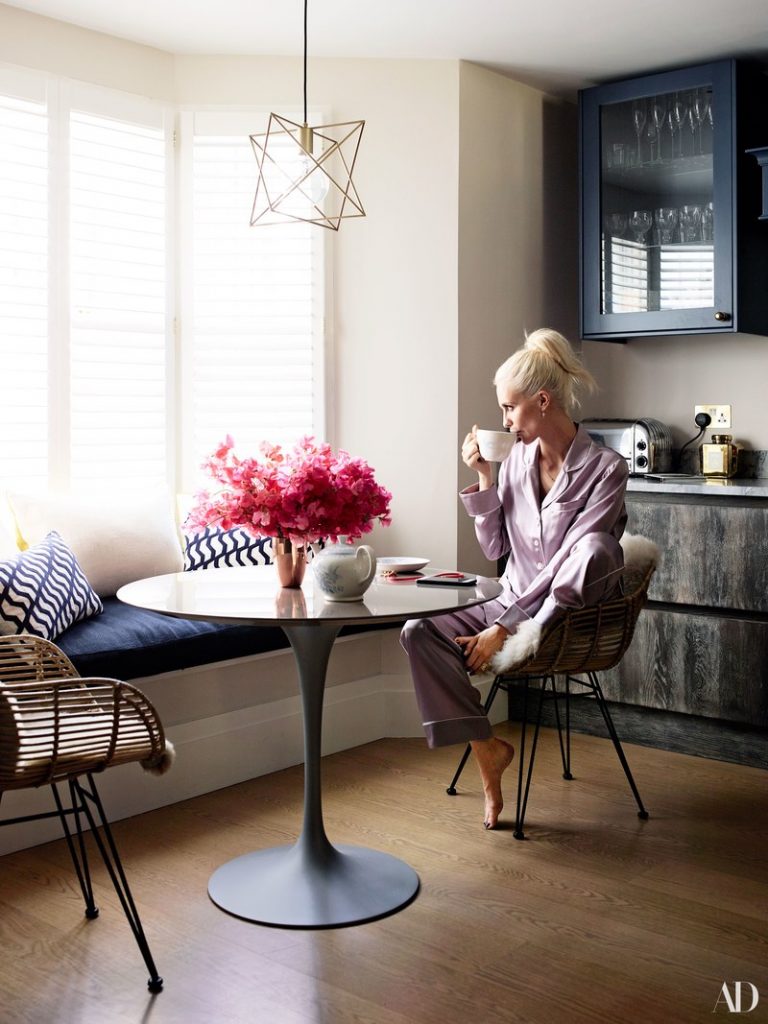 However, it was no minor refurbishment. The reno, which they did with architect Alex Tart, took well over a year and included relocating the central staircase, raising some ceilings and lowering others, and even digging down and out into the garden to excavate space for Poppy’s study. Planning permissions were complicated, and James personally trotted drawings over to the neighbors’ houses to seek their approvals. At one point, Poppy says, “I remember standing on the doorstep, and I could see from down in the basement all the way to the roof. It was just a shell of a house, and I thought, What have I gotten myself into? Thank God for James, who was always so positive and in control. I felt safe and knew it would get done.” James says of his biggest effort: “I had to keep a tight grip on the budget!” 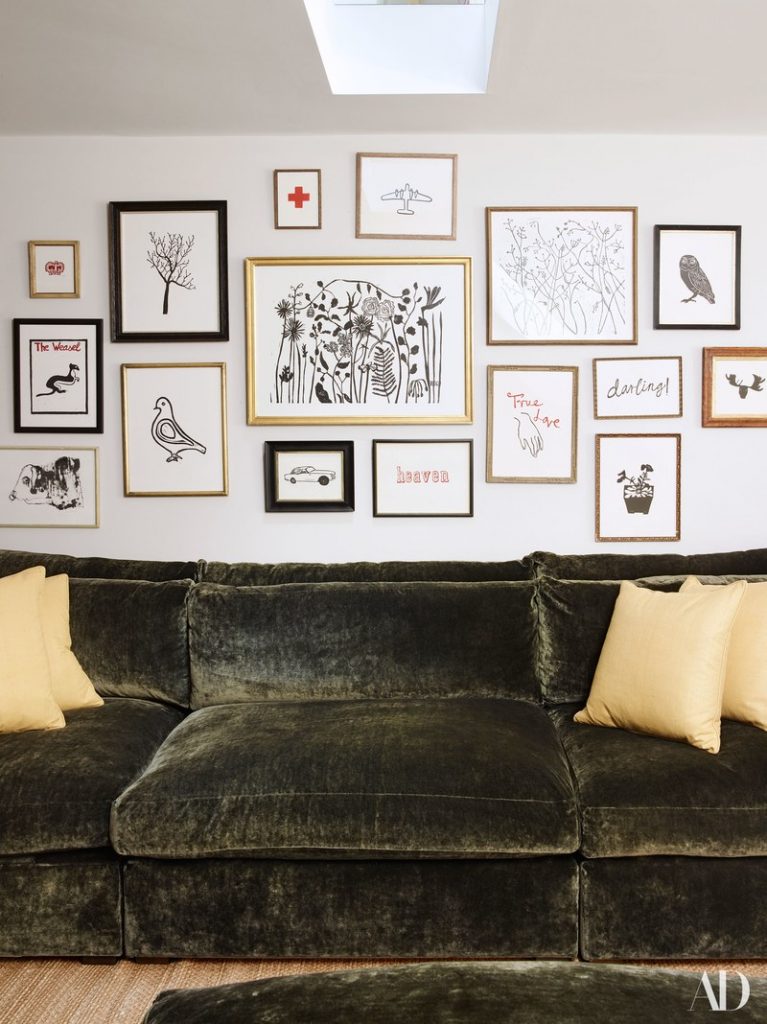 In the living room, linocuts by Hugo Guinness hang above a Custom sofa dressed in a Designers guild Velvet.

Once the ordeal was over—and the roof in place—the couple turned their focus to kitting out the interiors with the help of London-based designer Joanna Plant. “I met them through Poppy’s aunt, but the decorating deal was cut between Pops and my husband on the fields of Glastonbury,” Plant explains, referring to the outdoor music festival that takes place in the English countryside every summer. “If you knew Poppy, you wouldn’t be surprised!” The aesthetic she followed was “grown-up fun,” which started with the bar because, well, “every house needs one!” 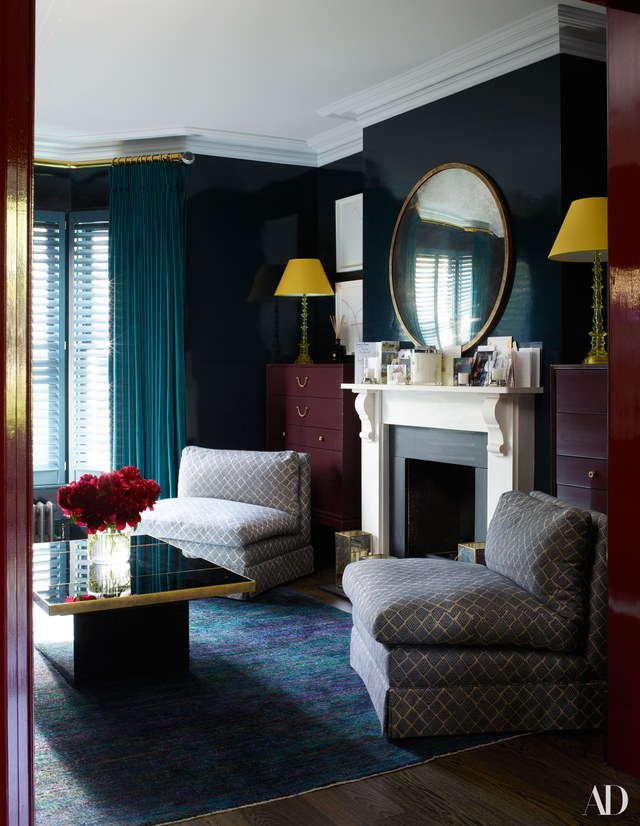 With Poppy traveling around the world for fashion shoots and events, James based in West Sussex and Heathrow, and Joanna in London, the decorator says she eschewed sketches or mood boards and coordinated most of the decisions via group SMS. “Often we’d decorate by text. I’d send a photo or an idea; everyone would respond instantly in whatever time zone they were in. And, presto, a decision was made.” 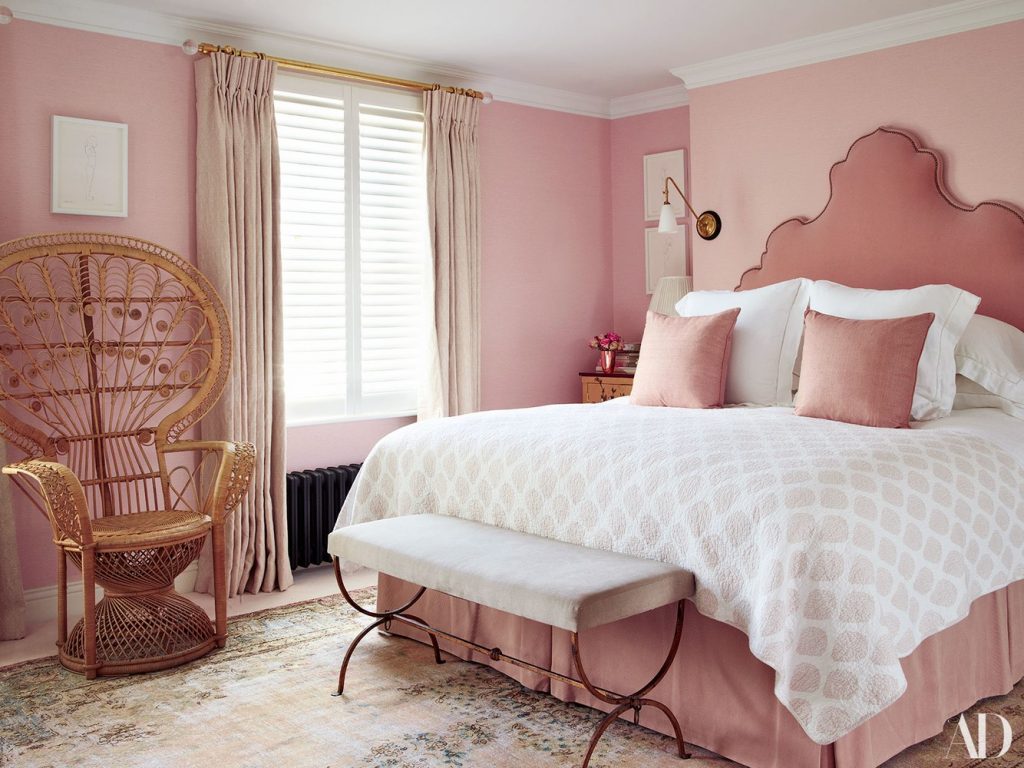 A rose-pink linen from Fromental covers the walls of the master bedroom. Vintage peacock chair; headboard by Ensemblier in a mohair velvet by Claremont; Quilt from Oka; Bed linens from the White Co.

The couple’s travels inspired their favorite rooms. James is partial to the sitting room, which has glossy walls and velvet curtains in a vibrant teal inspired by the Hôtel Costes in Paris. “We wanted it to feel mysterious and naughty,” Poppy explains. Poppy loves the sitting room, too, but she is “obsessed” with the small powder room on the ground floor, which was carved out under the new staircase and wrapped from floor to ceiling in iconic Beverly Hills Hotel banana-leaf-print wallpaper. “I get a real kick out of people’s reactions when they go in there for the first time,” she says. “It’s kinda wild!” 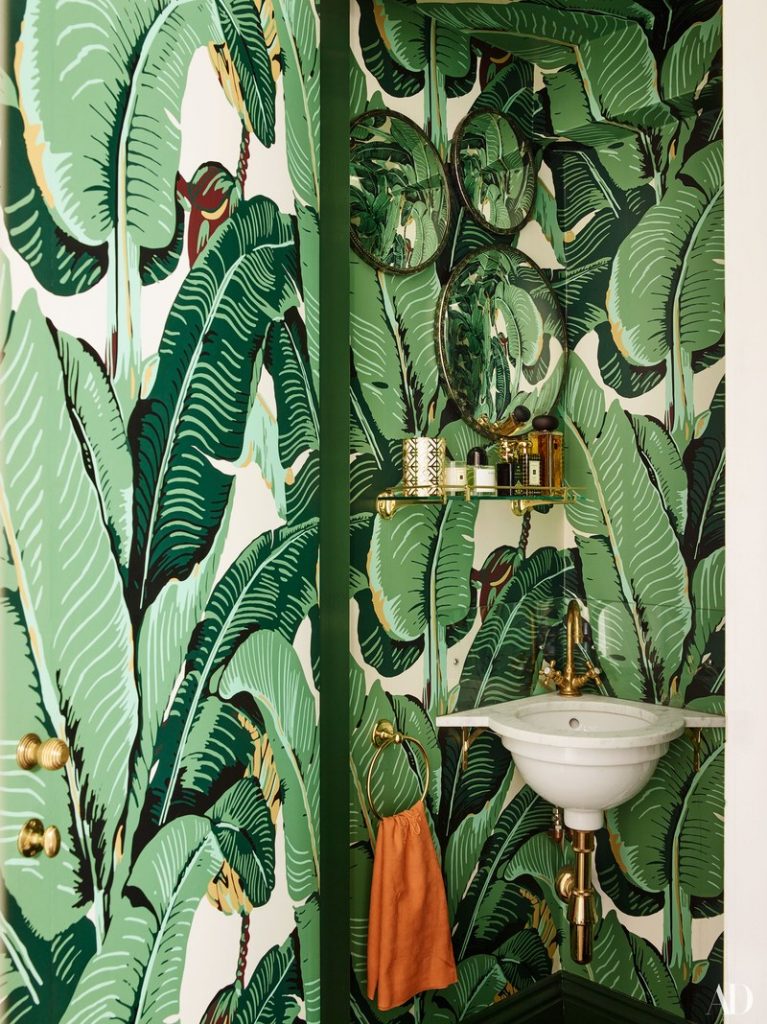 Like all couples in the midst of remodeling, they had to reach multiple compromises, most of which have been forgotten in their delight with the final result. But one room was completely nonnegotiable, per Poppy’s request. “All I ever wanted was a pink bedroom, but James wasn’t convinced,” Poppy says. “Now he loves the pink because it’s so calming and cocoon-like in the winter.” Her mischievous smile returns: “Or so he pretends.” 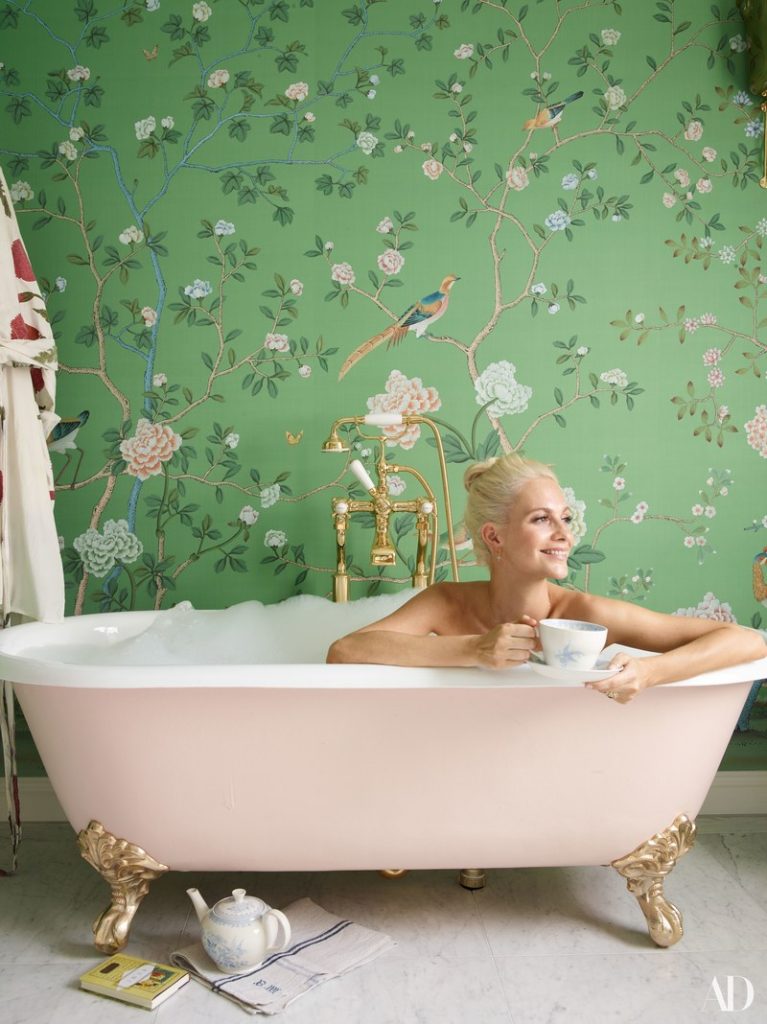 Poppy in the master bath. The master bath is clad in a hand-painted silk wall covering by De Gournay. Tub and fittings by C. P. Hart.