HOUSE TOUR: STEP INSIDE THE COLORFUL HOME OF MARGHERITA MISSIONI VIA ARCHITECTURAL DIGEST 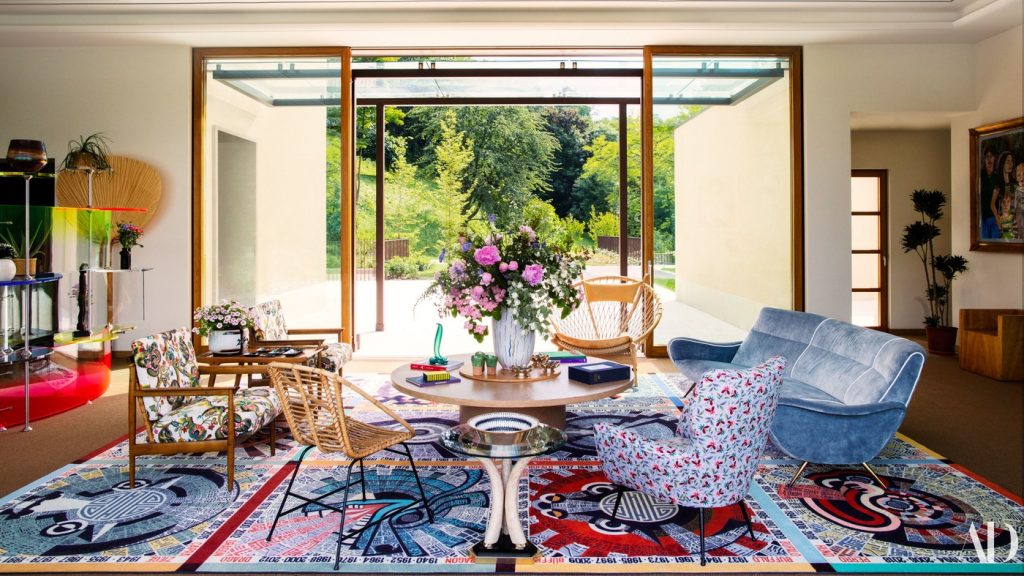 Lately I have been dreaming of “La Dolce Vita” and all things Italian as we plan our 20th anniversary trip to the Amalfi Coast next month. I have been a huge fan of Missioni as long as I can remember. Their energetic colorful patterns are instantly recognizable on everything from their fabulous fashions to their stunning line of textiles and carpets. I loved getting a glimpse of third generation Margherita Missioni’s home via Architectural Digest in the bucolic town of Varese. It is a sophisticated, yet playful mix of so many design elements I love….color, pattern, murals, original art, modern furnishings mixed with vintage finds, a sense of humor, and most importantly deeply personal aesthetic reflecting the family that inhabits the space. 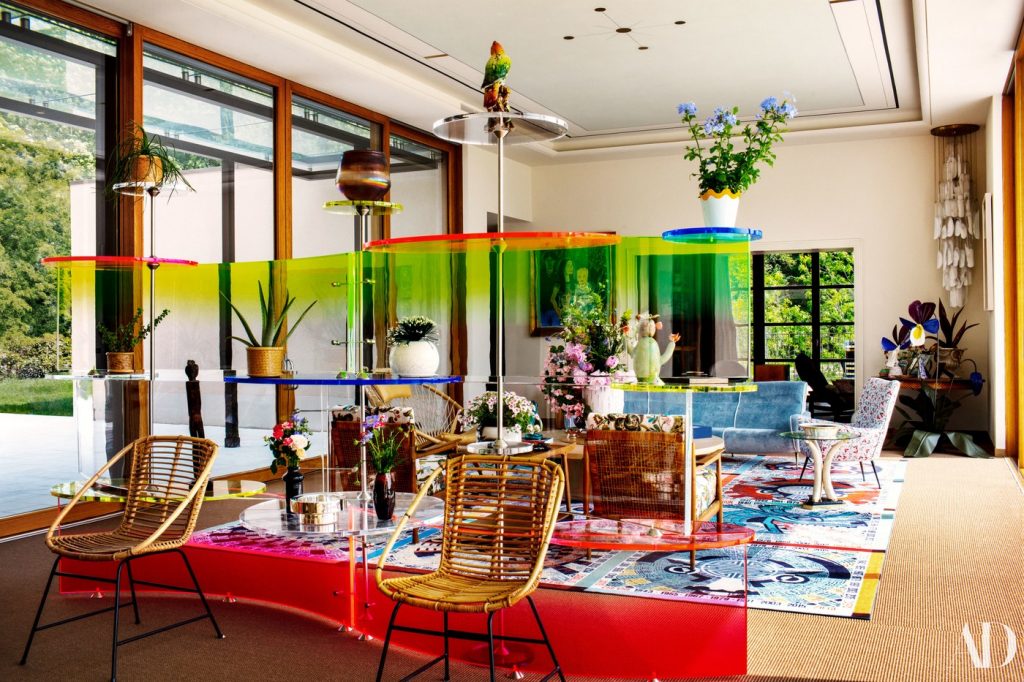 Varese, a city in the Alpine foothills about an hour’s train ride to the north of Milan, became popular in the mid-1800s as a getaway for the capital’s wealthy citizens. Today, its best-known residents are probably the Missonis, fashion’s famous knitwear clan. Ottavio and Rosita Missoni established the company nearby in 1953, and the region still serves as the base for design operations and home to many family members.

Though Missoni’s iconic zigzag print is now synonymous with movie stars and European aristocrats, Varese remains slow and sleepy—the opposite of what most would consider a hot spot. And in 2012, when Margherita Maccapani Missoni, herself a designer and the eldest of the family’s third generation (her mother, Angela, is current creative director), married Eugenio Amos, a race-car driver who also grew up there, she used the hashtag #VareseThePlaceToBe as an ironic tribute to her beloved hometown. “It was surreal to see all of my friends from the fashion world descend here,” she recalls. The gag went viral, and “it ended up on the front page of the local newspapers!” 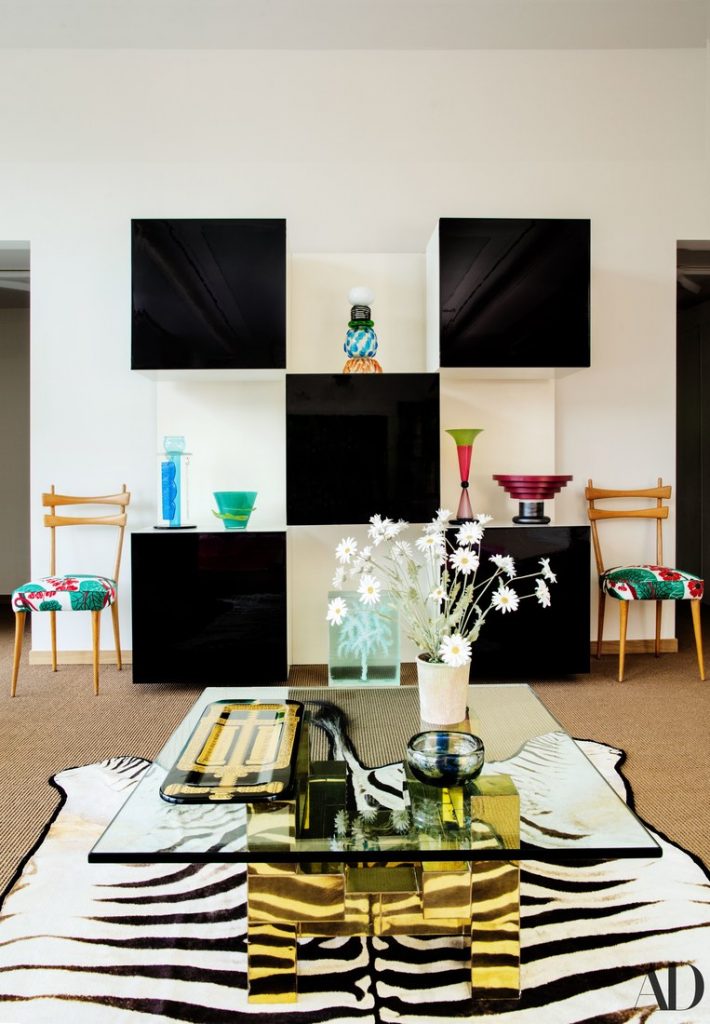 Missoni Amos, now 35, left after high school, first for Milan, then on to Barcelona, New York, Paris, and Rome before circling back to Milan. After she and Amos married, she craved a home where they could put down roots back in the place they grew up. So the next year, after finding the ideal site, the couple enlisted Milan-based architect Aldo Cibic to build a four-bedroom house there. Missoni Amos insisted on handling the interiors herself. “Which was maybe a mistake,” she admits with a sigh. “I’d never done a house before, and I underestimated how much work it entailed. I thought I’d just be picking out wallpaper. Ha!” Now, five years later, she’s finally wrapped it up. “It turned out to be the biggest job I’ve ever done, and I can’t help but be extremely proud of it.” 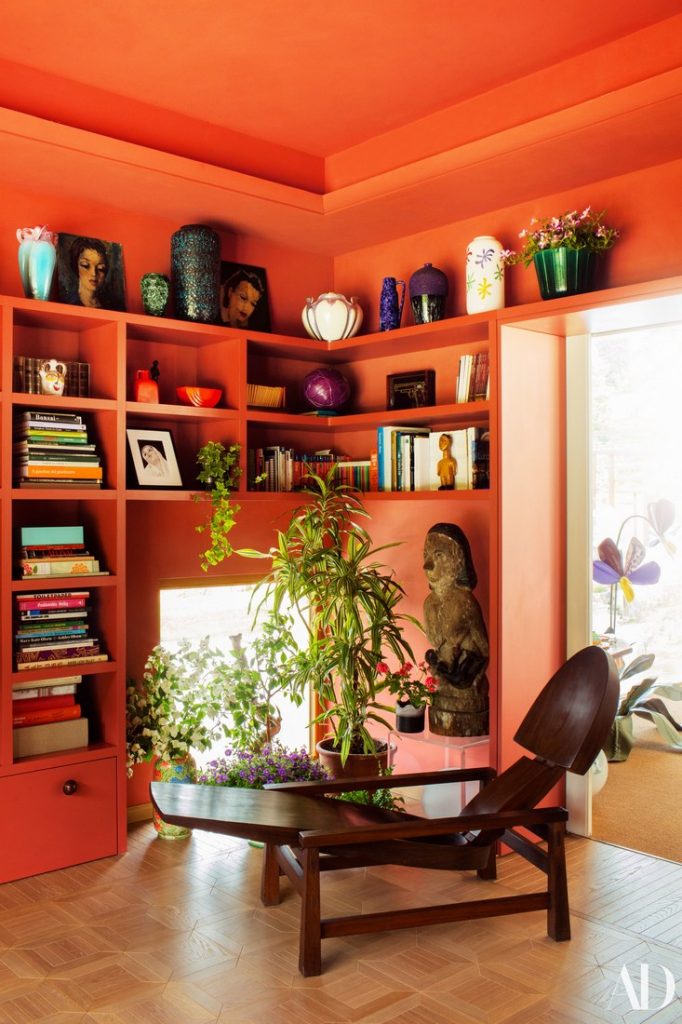 The Missoni brand is known for its embrace of bold colors and contrasting prints, and this same ethos informs the look of the house. “Color and shape took priority over period coherence,” Missoni Amos says. The majority of the furnishings were sourced online—“Cruising eBay is one of my favorite activities”—or found on frequent day trips with Amos. “We’d agree to take a day off to go on a romantic adventure. So we’d wake up at 5:00 a.m., open the newspaper, and say, ‘Today, let’s go to this art fair in Belgium.’ We’d jump in the car and try and make it back in time for dinner.” Missoni Amos never bothered with a tape measure, buying items on instinct and storing them in a rapidly expanding facility nearby. In the end, “incredibly, nearly everything fit perfectly,” she boasts.

The daring design sense that’s part of Missoni Amos’s DNA is evident throughout the house. One of the first things installed was a giant Spider-Man on the ceiling of the playroom for her two boys, Otto, five this month, and Augusto, three. “And they haven’t gotten bored of it yet!”

The extended tribe—both Mamma and Nonna Rosita are only a short drive away, don’t forget—now gathers frequently in the living room, which features a colorful portrait of the Amos quartet by Missoni Amos’s friend Lola Schnabel. “I love her hand and the essence she brings out in people,” Missoni Amos says. She’s quick to point out that the sofa under the painting was bought on eBay for $500 in mint condition; she then had it reupholstered in pale-blue velvet. 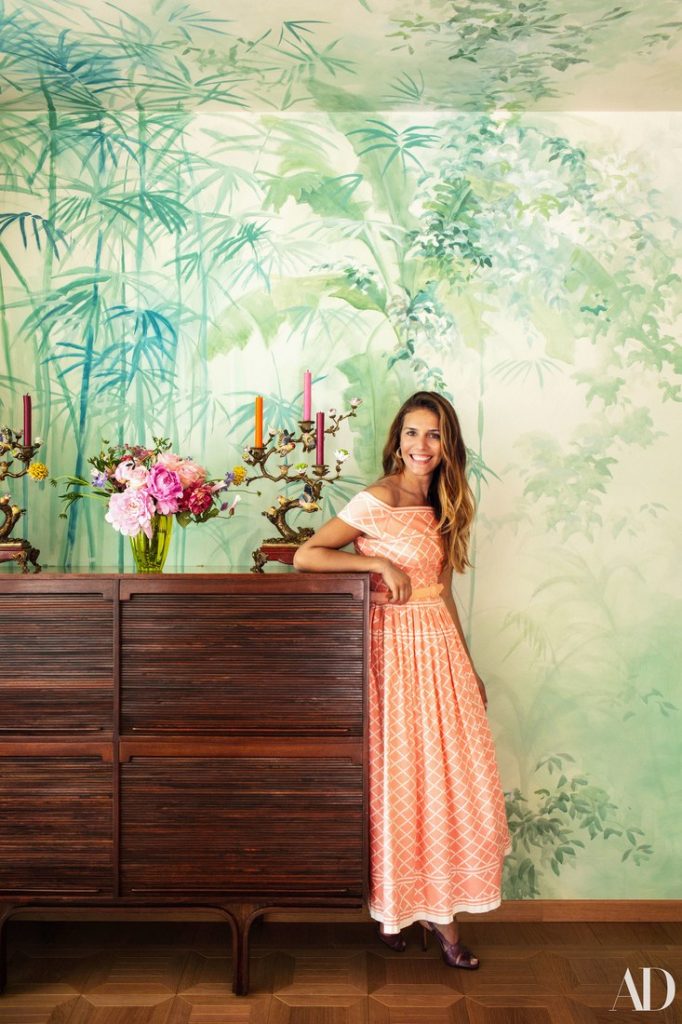 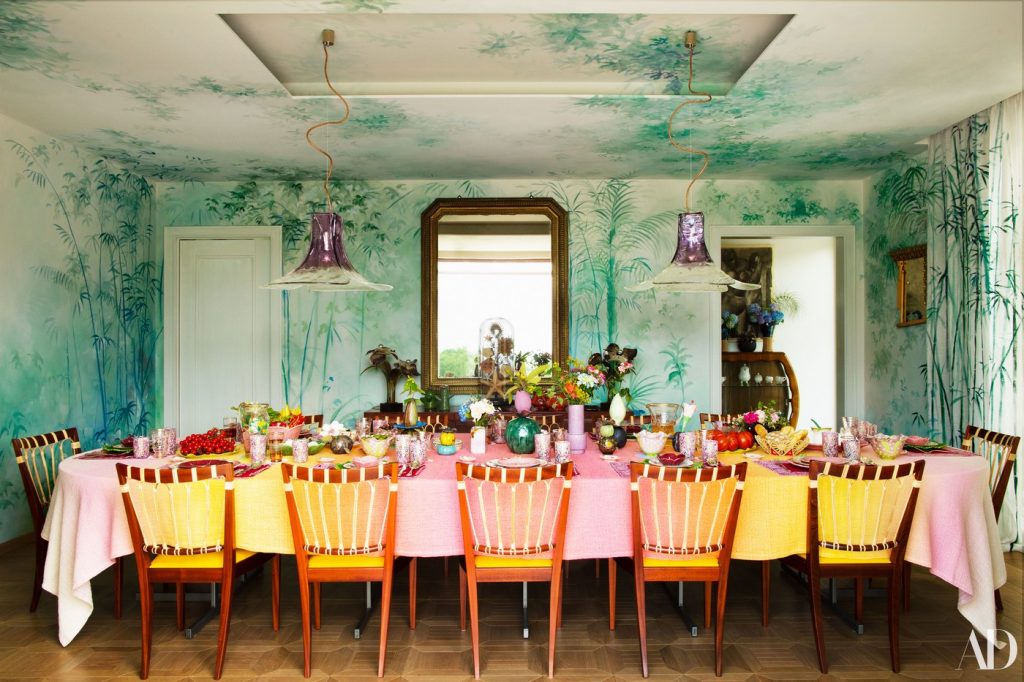 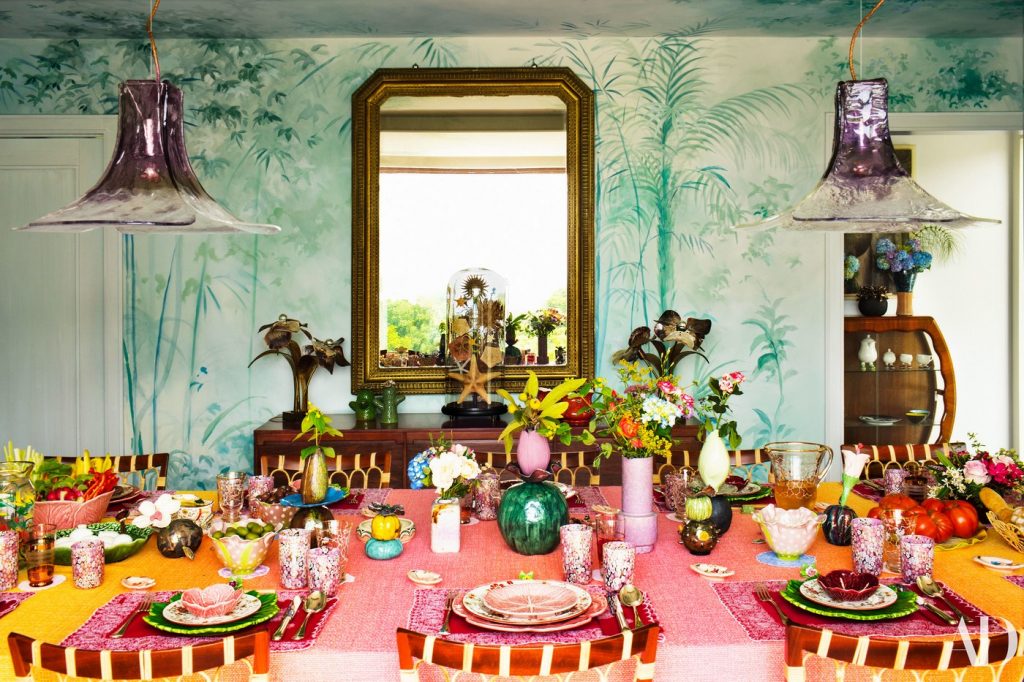 A garden mural painted by Pictalab, an artist collective based in Milan, covers the dining room’s walls—and ceiling. 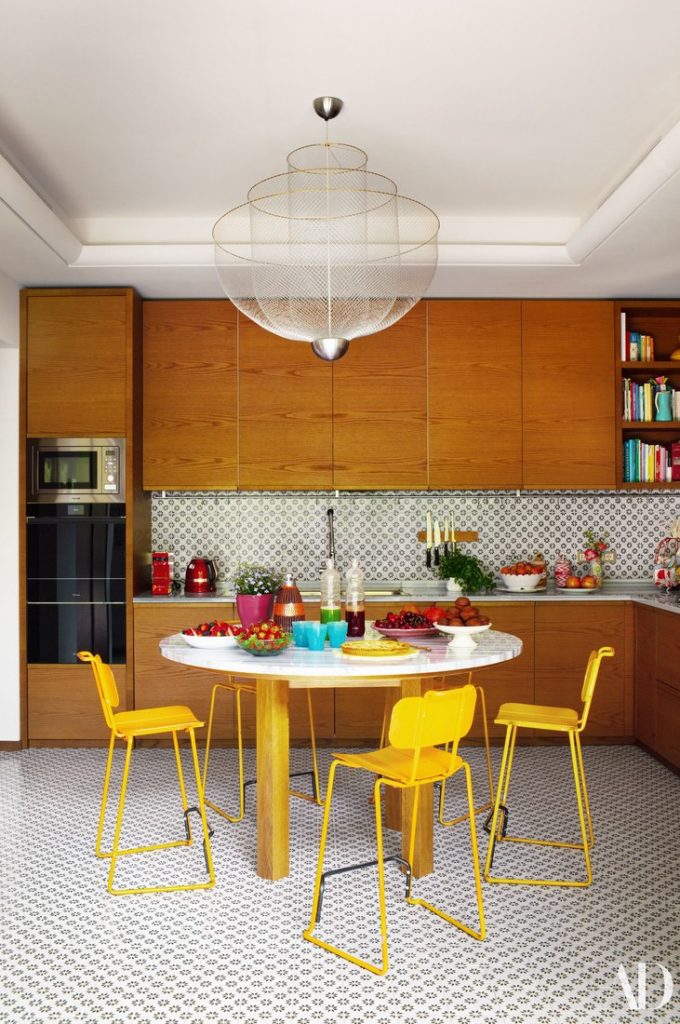 The kitchen floor and walls are clad in a punchy artisanal tile. “It turned out to be the most expensive material per square foot in the entire house, which my husband is still trying to make sense of.” 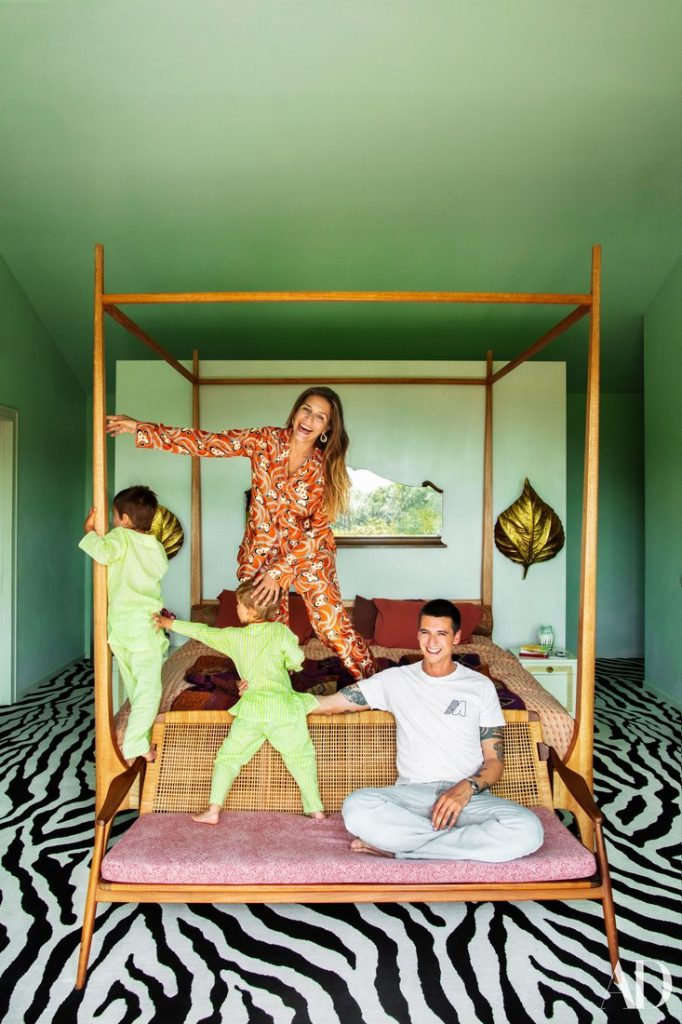 The master bedroom’s Albizia wood four-poster, which Missoni Amos had been eying for a long time, is by Mauro Mori. “I’ve been wanting it since before the house was built, so when the time came to make it, we made sure it was as big as could be—perfect for family cuddles in the morning.” 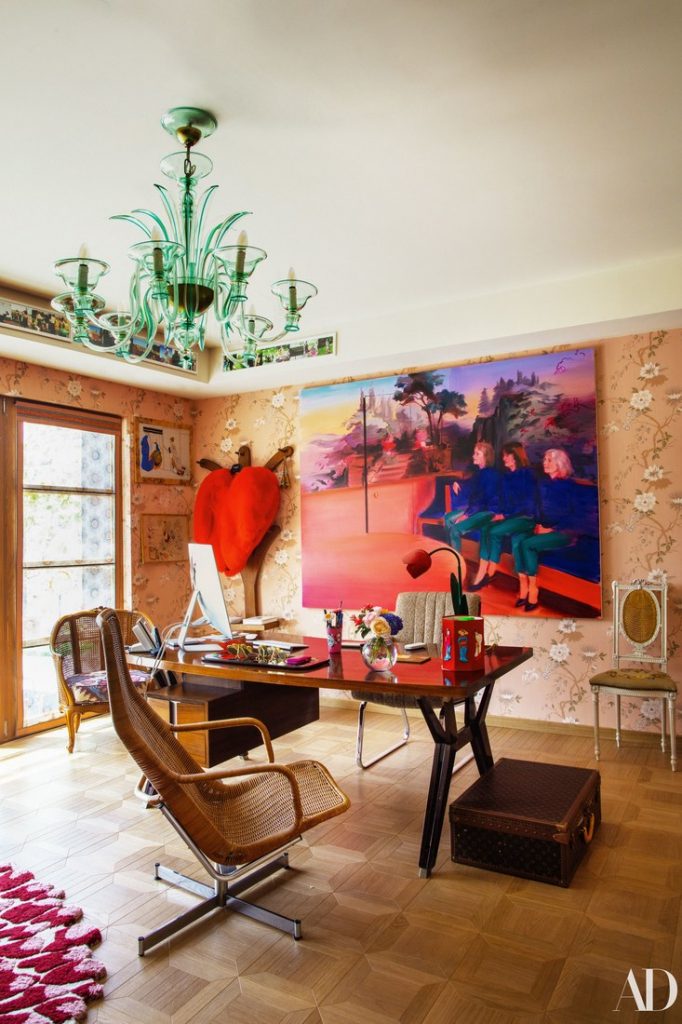 “My favorite room is my office—it’s the only part of the house that is entirely mine,” Missoni Amos says, admitting that it’s a relief to her husband that she has a place to display her collections of daisies—margherita means “daisy” in Italian—and Venetian masks. It even has a separate entrance so that she can conduct meetings without disrupting the rest of the house. (She has collaborations with contemporary brand Splendid, the handbag line Ximena Kavalekas, and swimwear company Mott50.) Amos has his own space, too: The garage, where he houses his car collection, is outfitted with a comfortable sofa and a bar. 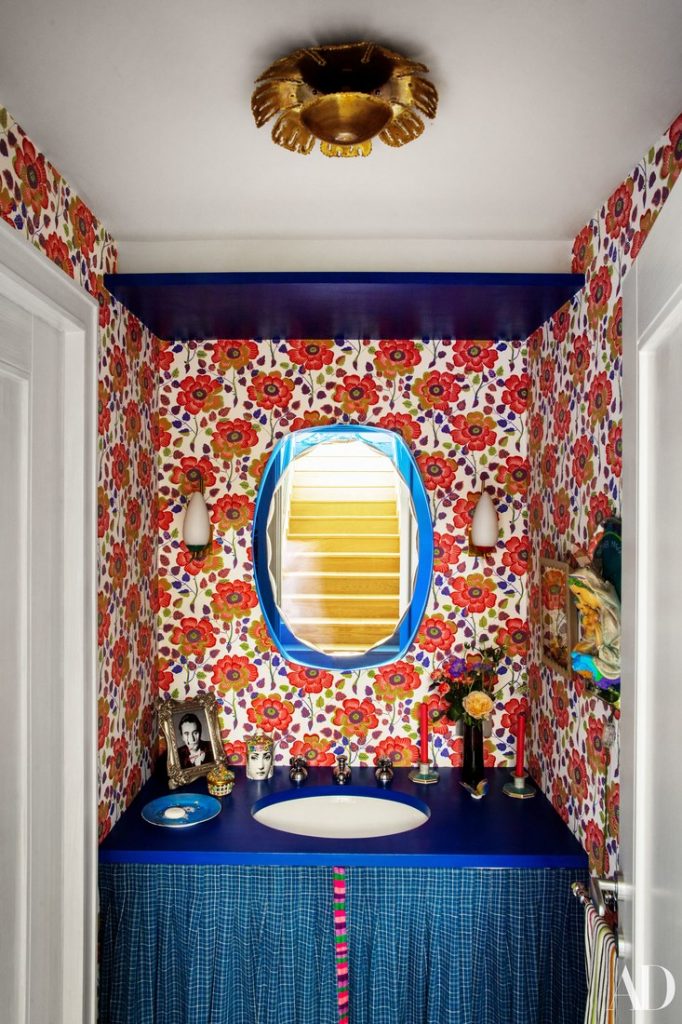 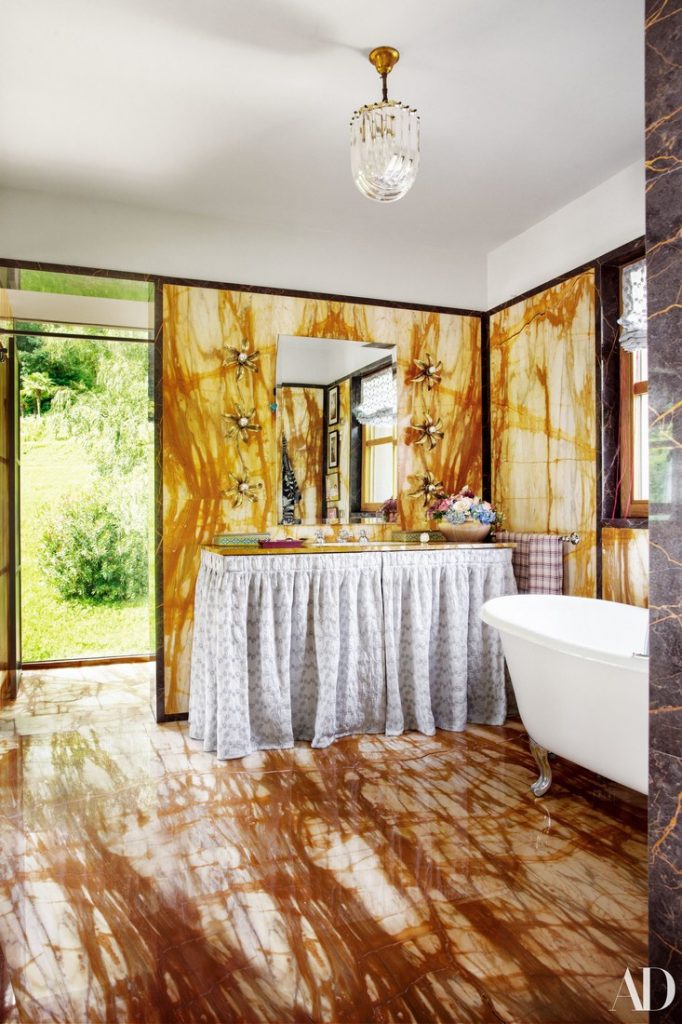 Flamboyant marbles, including one nicknamed Missoni by the company that supplied it, and bold Josef Frank wallpapers for Svenskt Tenn define the bathrooms. 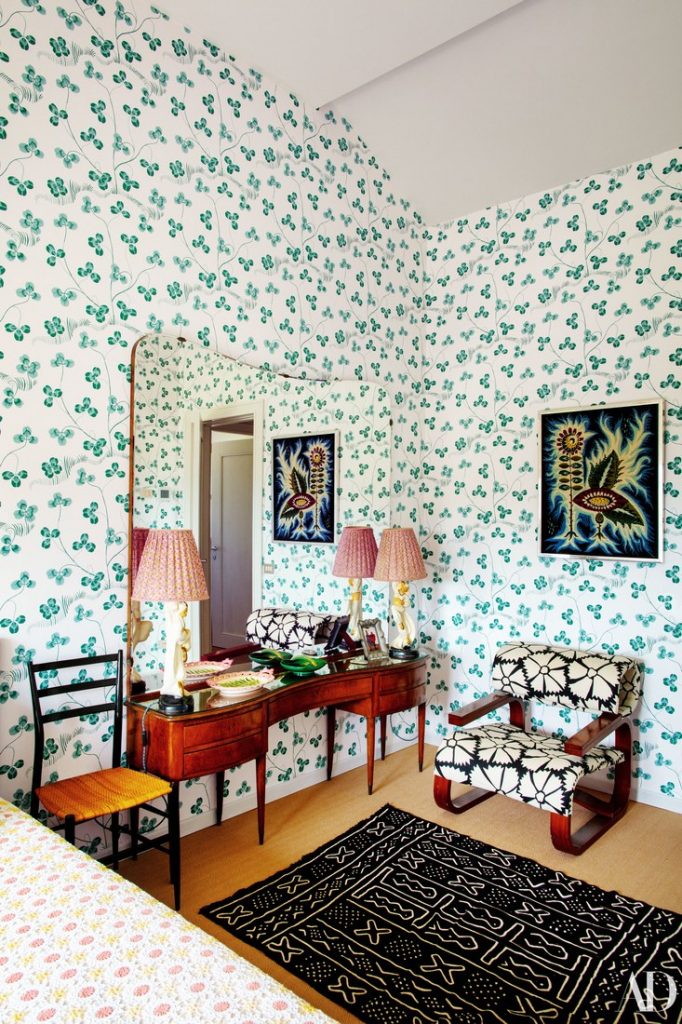 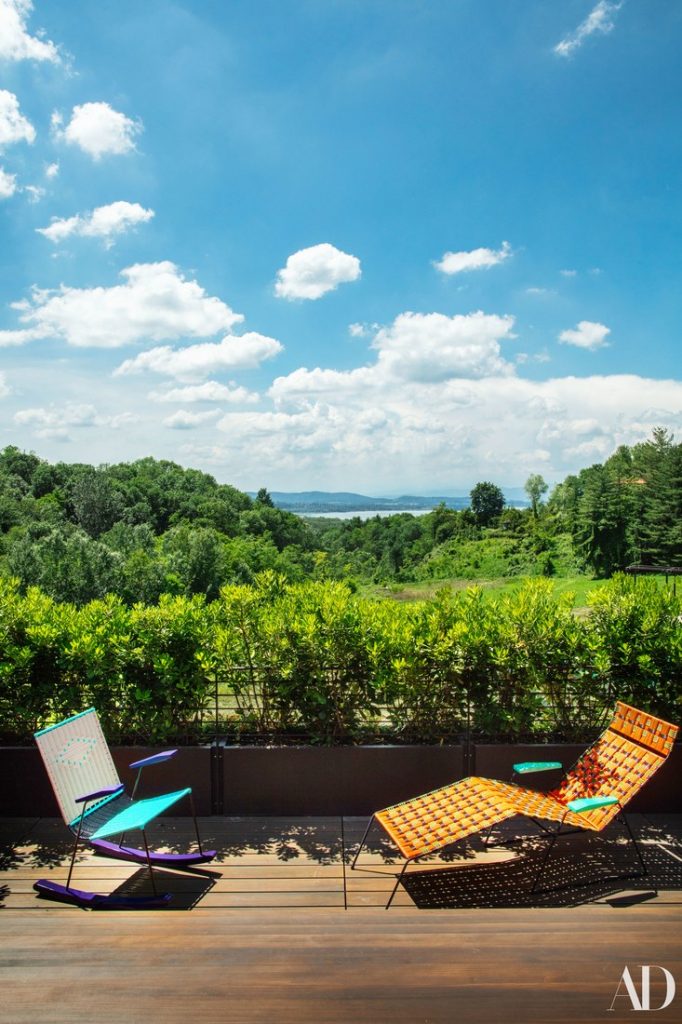 A terrace with views of Lake Varese in the distance is furnished with outdoor pieces by Marni. 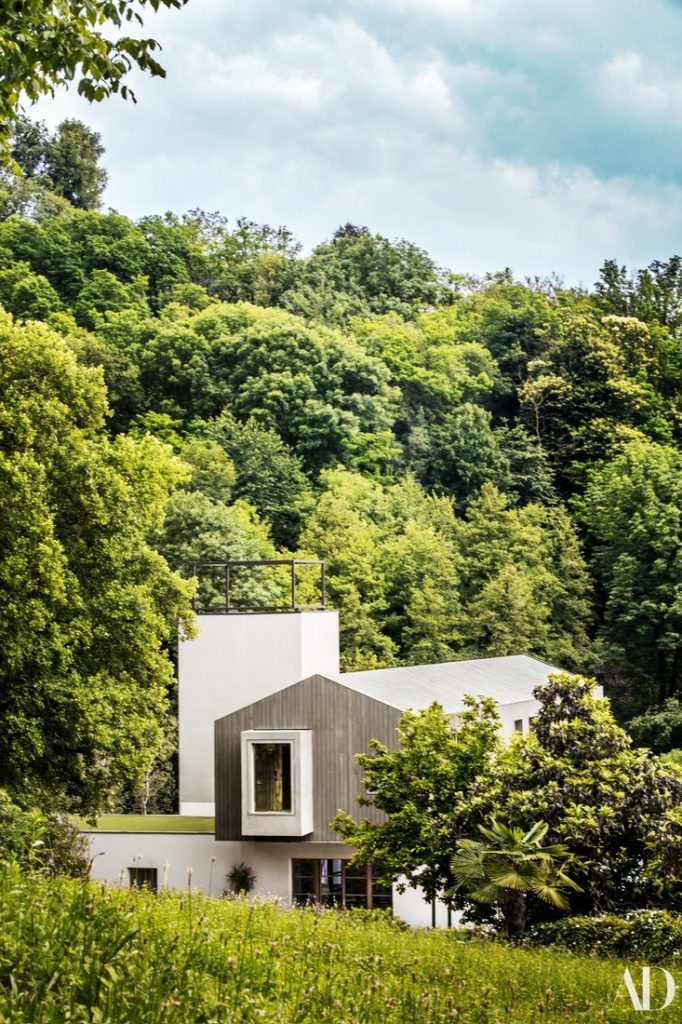 I love the small-town life I was brought up in, and I really wanted my kids to have that. As she finally moved into her new house in her old hometown, the full-circle moment was not lost on Missoni Amos. “When I was growing up, I couldn’t wait to get out. It was only when I was living in the biggest city of them all, New York, that I realized how lucky I was to have these roots and such a deep sense of belonging,” she says. “When I got pregnant, we didn’t even question where we were going to settle our family—it was going to be back in #VareseThePlaceToBe.”