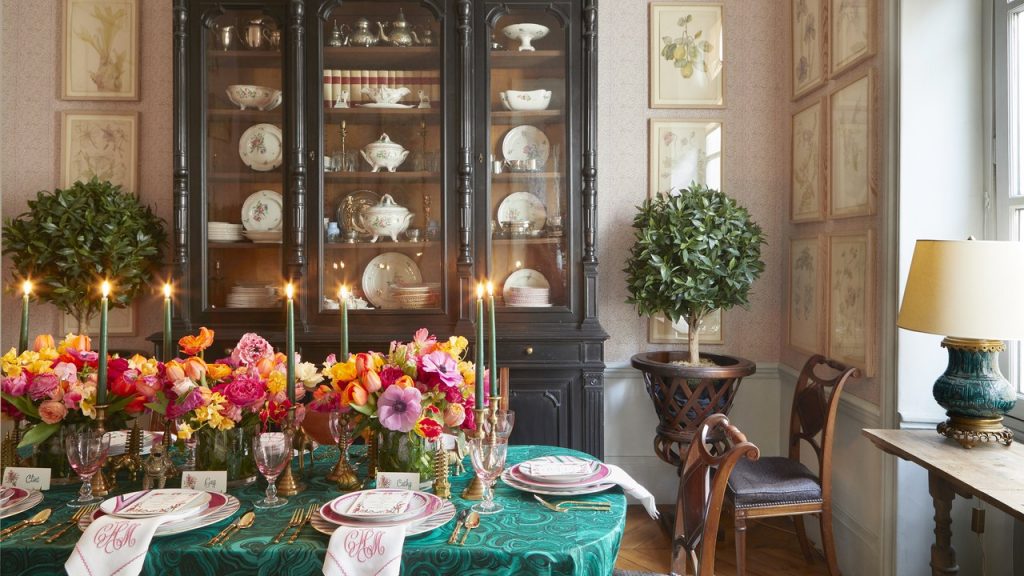 Design has taken over Paris this week with the 10th anniversary of Paris Deco Off and the opening of global trade fair Maison + Objet. Besides the massive fair, this means more than 100 fabric and furniture showroom open houses, countless pop-ups and special events, and streets festooned with oversize lampshades swinging from the buildings in the City of Light. It also means every night is jam-packed with cocktails and dinners hosted by the big industry showrooms, but there are also smaller private events. One of the most intriguing invitations of the season was the beautifully designed one for “An Unforgettable Romp in Paris: An Evening Inspired by Elsie de Wolfe and Tony Duquette,” hosted last night by Charlotte, North Carolina–based interior designer Cathy Austin of Catherine M. Austin Interior Design at the Paris home of AD 100 designer Frank de Biasi and designer Gene Meyer. 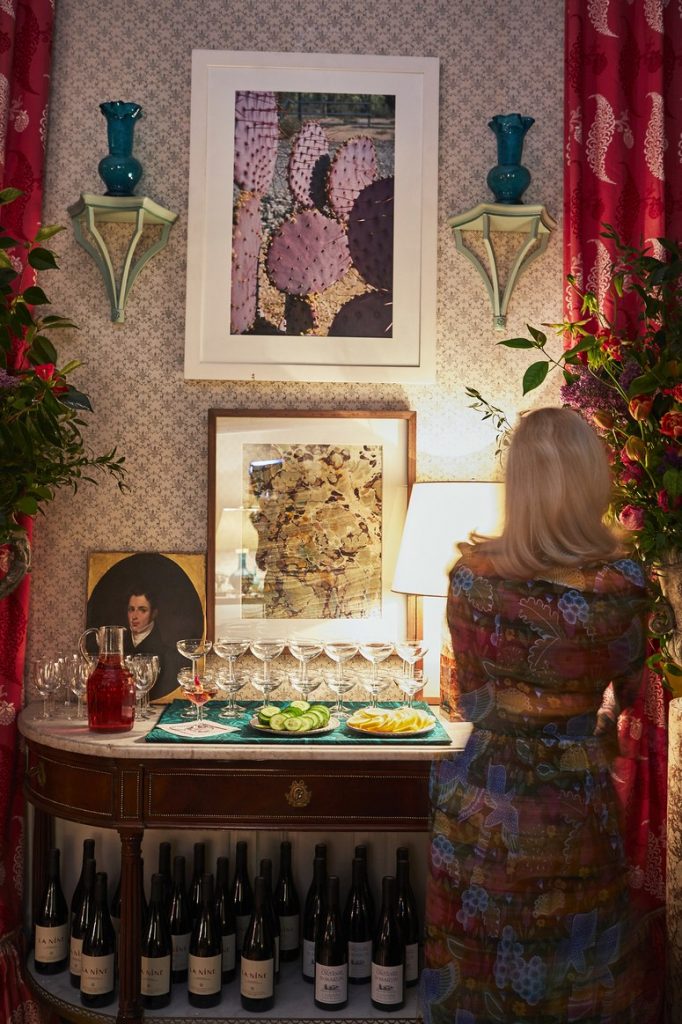 AD PRO popped over to observe the afternoon party planning the day of and catch up with the infectiously enthusiastic and passionate Austin, who, despite flying in the day before, was bright-eyed and cheerful with a suitcase full of vividly colored feathers and hot pink sashes. “There is just something so lovely about entertaining in someone’s home, and I have so many friends from all over the country who are in town this week, I thought it would be such a great way to say thank you to all of these people,” Austin explained as she bustled about arranging colorful place settings and accessories. 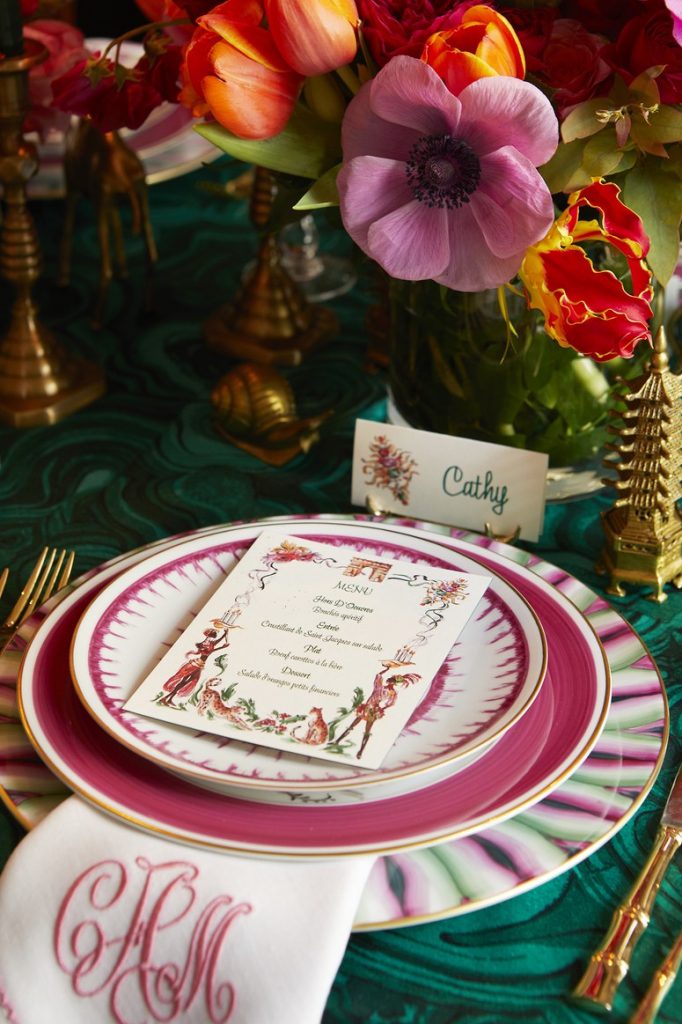 The table settings, featuring plates by Marie Daâge and a menu and place card by Russell Melzer. Photo: Kelly Marshall

Nothing could be more complementary to the extravagant, maximalist, and colorful (there’s the Duquette inspiration) evening than de Biasi and Meyer’s picture-perfect appartement. Dedicated to Elsie de Wolfe, a.k.a. Lady Mendl—often attributed with inventing the profession of interior decorating—and her protegé Duquette, designer and, in all senses of the word, extraordinaire, the evening did not disappoint. “We studied Elsie in design school as the founder of our industry and she was also a shrewd businesswoman,” says Austin. “What I found out later was that she was also the consummate hostess with all of her entertaining in Paris before the war. I just thought, ’How wonderful to be in her orbit!’” 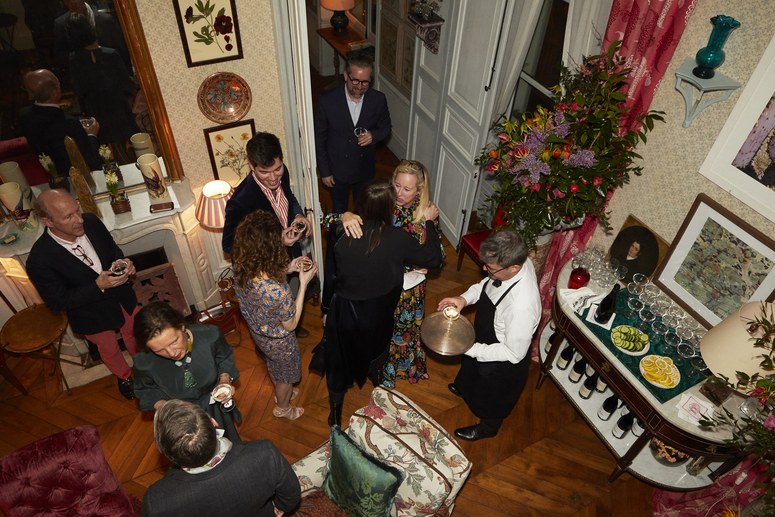 The atmosphere in the party. Photo: Kelly Marshall

Dinner guests were greeted with the sounds of Cole Porter and Ella Fitzgerald and quickly offered a welcome cocktail called the Lady Mendl. Drinks were followed by entry into the intimate dining room, with a festive table festooned in honor of Duquette with his signature malachite fabric from Jim Thompson, which proved a pretty backdrop to spectacular flowers provided by Oz Gardens, located a few blocks away. 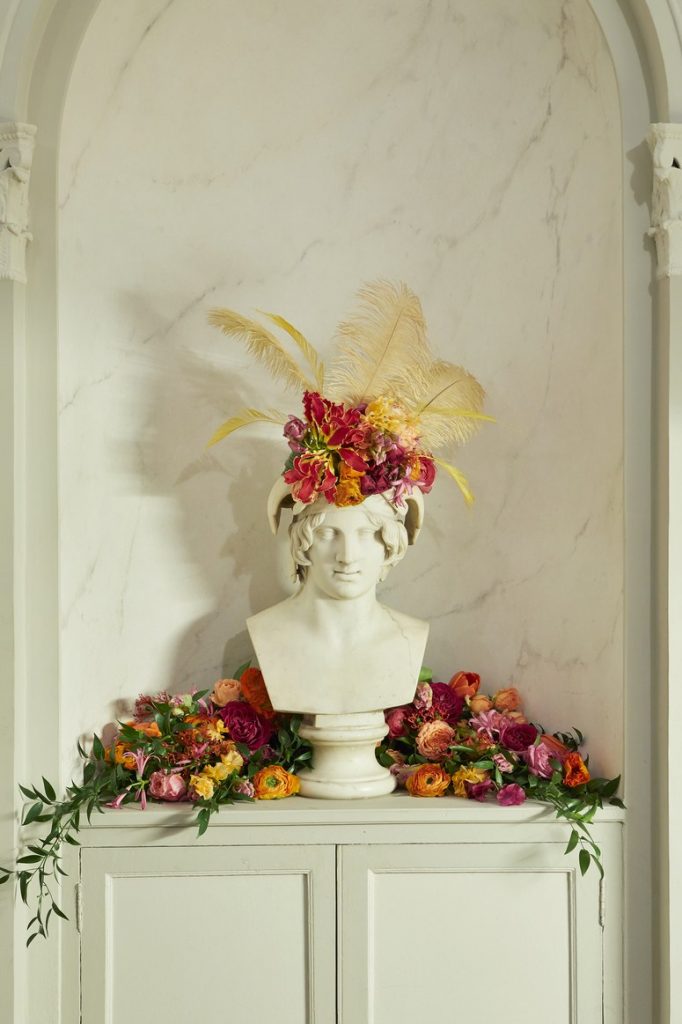 Flowers on a bust in the apartment. Photo: Kelly Marshall

“I had a clear vision of what I wanted for flowers: pinkish red and green to pick up the tablecloth,” Austin says. “I worked with my floral designer in Charlotte before going to Oz Gardens.” The table was designed to surprise and delight—and that it did. All the plates were produced by Parisian ceramic artist Marie Daâge, who created bespoke designs inspired by Elise’s love for chinoiserie and travel. “I have admired Marie’s work for a long time, so this was perfect,” Austin says of the results.

Pink glasses from Nina Campbell London and miniature gilded antlers—an ode to Duquette—as place card holders for the fun and fanciful name cards designed so brilliantly by Russell Melzer rounded out the setting. Melzer also designed the invitation and menus.

Guests dined on croustillant de Saint Jacques and boeuf aux carottes expertly prepared by Parisian private chef Enrique Zaera. The meal was topped off with citrus slices, chosen to beautifully enhance the color scheme of the table! After dinner, the front doorbell started ringing and the apartment flooded with chatter and laughter as additional guests arrived for a late-night salon of more cocktails, dessert, cheese, and conversation. To quote Tony Duquette, “Each of us has an enchanted vision that we carry around in the treasure house of our minds….your personal approach to your own magic.” Austin shared her own personal magic last night—we imagine both Duquette and Lady Mendl would have been thrilled.

These words were ingrained upon me during my first History of Interior Design class taught by the inimitable Kate Kyle, ASID Fellow and the Head of the Design Department at the American College in Atlanta, GA. Ms. Kyle taught all entry level classes in order to make sure every student had a firm foundation as well as weed out the inferior students. Through Ms. Kyle, we learned about Elsie de Wolfe (later known as Lady Mendl) as the founder of our industry, her fierce business acumen, the importance of authenticity and working with talented craftsmen and artists. She encouraged us to travel, and to attend every exhibition and house museum in order to train our eyes. Only through studying the best would we truly understand suitability, simplicity and proportion. These traits govern every design decision I make thanks to these design doyennes.

In 2015, I heard Hutton Wilkinson (Tony Duquette’s apprentice and now Creative Director and CEO of the Tony Duquette, Inc.) give a lecture on Elsie de Wolfe’s flair for entertaining and her friendship with Tony Duquette as he was writing The Walk to Elsie’s.  The historical fiction depicts the relationship between the two creative forces sharing secrets and adventures across the United States and Europe from 1936-1951 as Tony becomes Elsie’s last great protégé. The books opens with an invitation to readers to join along on “An Unforgettable Romp” with an amusing cast of characters including Cole Porter, Billy Haines, Louis B. Mayer, Christian Dior, Judy Garland, Charles de Beistegui, and the Duke and Duchess of Windsor just to name a few.

“After all, it is beauty, not luxury that I value.” -Tony Duquette

Known for his fantastical artwork, sculpture, jewelry, gardens, costumes and interiors, Tony Duquette’s imagination is on full display at Dawnridge, his estate in Los Angeles. I had the opportunity to visit last spring and see his ingenuity firsthand. Tony referred to his artistic spirit as a phoenix who bridged the gap between nature and the human spirit and that this phoenix vision required that “the eye remain alive and on fire.” He believed, “Each of us has an enchanted vision that we carry around in the treasure house of our minds, because what belongs to our inner thoughts and dreams is what this is all about, your personal approach to your own magic.” He found magic in everything from insect bones and antlers to feathers and butterfly wings. He felt they all possessed a sense of mystery, purity, and perfection of form.

“I only want to surround myself with interesting, accomplished, and beautiful people.”-Tony Duquette

Elsie would host a weekly “salonniere” where interesting people would come together to talk and mingle. In addition to a monthly black-tie dinner dance, Tony Duquette would also host weekly dinner parties for his Hollywood social circle. Taking a cue from these iconic tastemakers, we decided to create an evening channeling Elsie’s spirit and Tony’s whimsy.

Austin Mill was instrumental in finding the perfect backdrop in Frank de Biasi and Gene Meyer’s left bank flat. In true maximalist fashion, we decided to have two events in order to accommodate our guests. To set the perfect note, I enlisted the help of artist Russell Melzer to create the “look” of the evening with invitations, menu cards and place cards. The evening begins with cocktails inspired by Elsie’s favorite drinks from The Ritz Bar with the sounds of Cole Porter and Ella Fitzgerald playing the background. The menu is a nod to designer’s infamous dinners she hosted at her flat in Paris just before the War. The tablescape is an homage to Tony Duquette using his signature malachite fabric from Jim Thompson along with an assortment of vintage figures and objets d’art set amidst flowers from Parisian florist Oz Gardens. Charlotte floral designer John Lupton assisted me in how to relay my floral fantasy vision to Oz Gardens.  Parisian ceramic artist Marie Daâge has created bespoke haute couture for the table reflecting Elsie’s love of chinoiserie and travel in a palette of fuchsia, green and gold.

After dinner, more guests arrive for a Late Night Salon with cocktails, dessert, and creative conversation. Coming to Paris each January for the design events allows me to reconnect with my design circle, hear about their creative adventures, and learn what has caught their eye during their travels. I think Ms. Kyle, Lady Mendl and Mr. Duquette would approve of each of us sharing our personal approaches to our own magic!