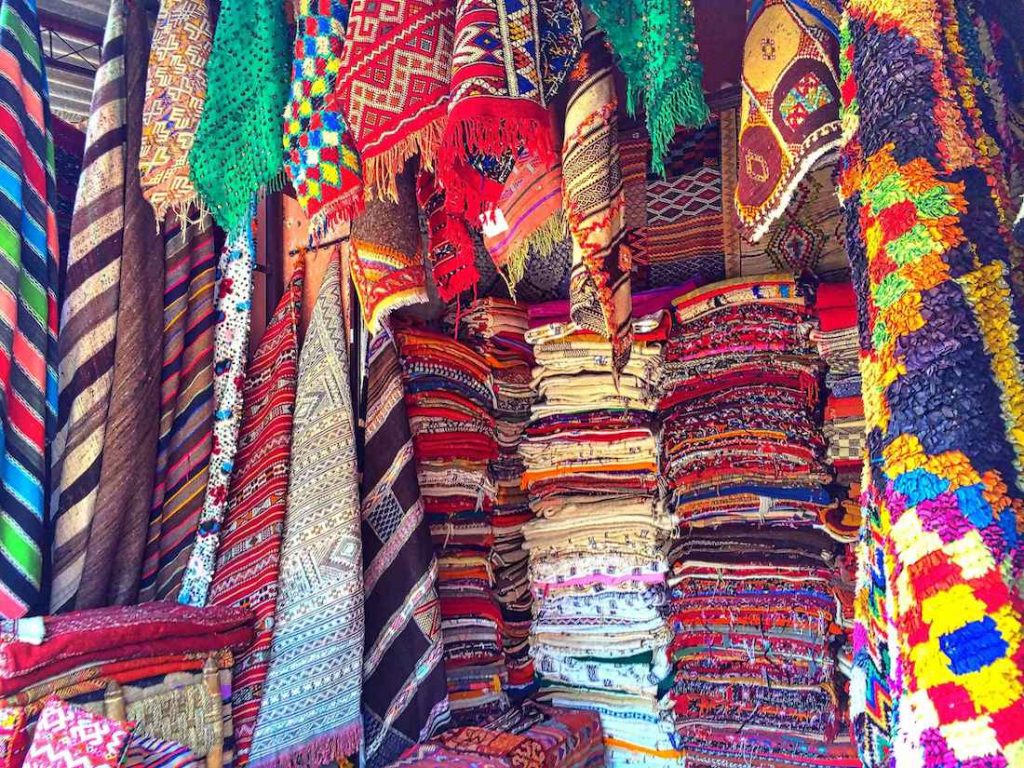 Do you know the difference between a Boucherouite and a Beni Ourain? In anticipation of my upcoming Moroccan adventure, I am studying up on my terminology to prepare myself for shopping in the souks. I always advise clients to think of rugs as artwork for the floor. In the same way I like to bring out the colors of clients’ artwork for their interior palettes, the same concept applies to the rugs. Rug making is a cornerstone of Morocco’s history and tradition. Every rug tells a story about the artist who created it incorporating symbols and talismans.

I was fascinated to learn that all of the rugs or “zerbiyas” are made by one of the forty-five Berber tribes in the country. The majority of rugs are handmade by women in wool on a loom and each tribe is known for their specific colors and designs. Each one can take from 10 days to 6 months to make. The 3 main types of rugs are Boucherouite, Beni Ourain, Azilal or Ourika. 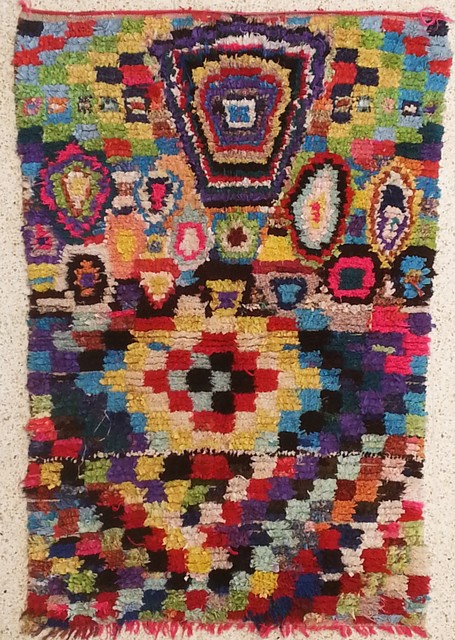 “Boucherouite rugs are specific to Moroccan berber tribes. In these, often very modest, households, the Berber women weave Boucherouite rugs out of discarded scraps of material. A thousand scraps of cotton, nylon and occasionally wool are woven into these fabulous boucherouite decorative creations.The contrast between the poverty of the materials used and the richness of the final composition adds to these awe-inspiring works of modern art. 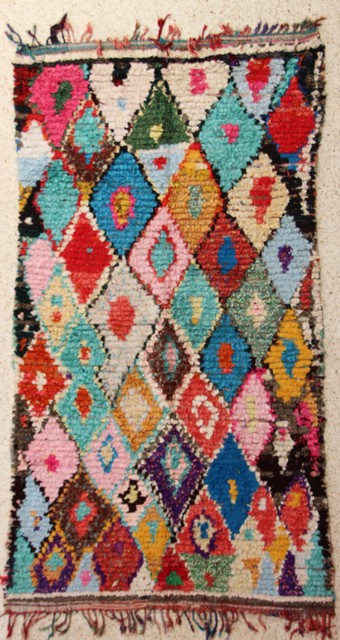 The sheer honesty of these artistic creations, their bright colors, their lyrical abstract movements and their modest prices are of great interest to the younger generation who appreciate their authenticity and aesthetic value.We become stirred by such carpets, moved by the knowledge that they were never conceived as artwork, developed at the whim of its weaver and influenced by the buried memories of their ancestors. 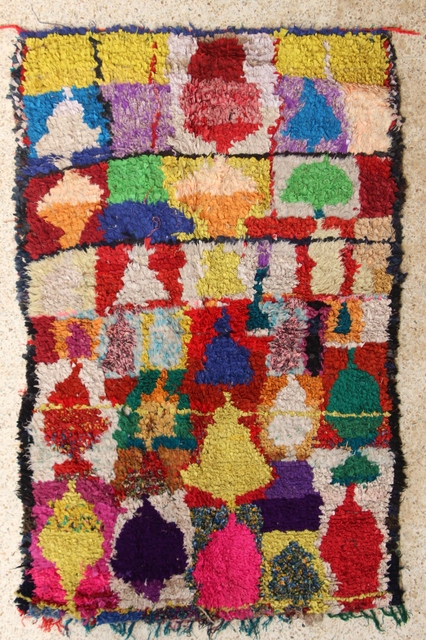 The Berber women weave through movement of their fingers, with no drawings or predefined designs, exactly as the different brush works create a painting. This is how each “boucharouette” tapestry becomes a unique work of art and how the limitless sensitivity of the Berber women can be expressed with no premeditation. The cultural influences of these Berber women can be traced back to the dawn of time; the ever-present diamond motif has existed since Neolithic times. These works reveal traces of thousand-year-old civilizations, revealing signs and symbols of even more distant history. 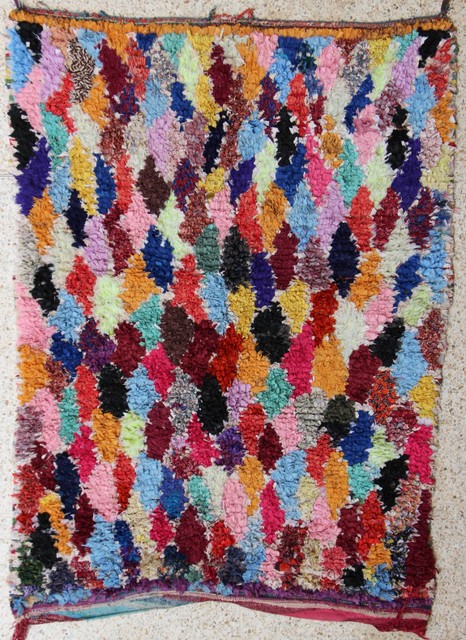 As Frederic DAMGAARD notes, in his excellent book “Tapis et tissages, l’art des femmes berbères au Maroc”, it is judicious to compare the tapestry work of the Berber women to a musical instrument: “It is easy to compare a Berber woman in front of her loom, to a pianist in front of his piano. Both compose a beautiful melody, with rhythms and harmonies, with colors and notes. Their scores remain flexible leaving space for personal improvisation. Both have access to large repertoires that can be interpreted according to personal whim and sensitivity. 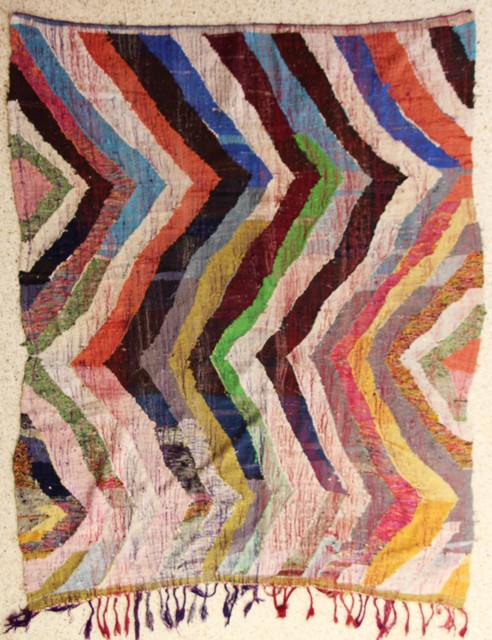 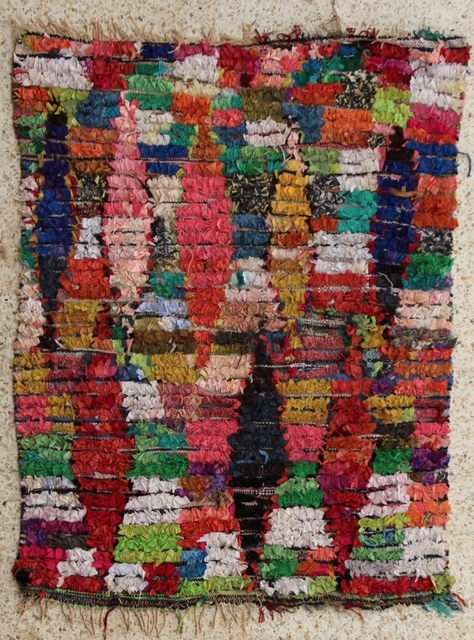 It is fascinating to state how the strong and sublime graphics of these Berber carpets and rugs has inspired many modern artists. It will always be astounding to notice the same notes that run through Berber carpets apparent in the works of KANDINSKY, KLEE, MONDRIAN, POLLOCK, or many other abstract artists. 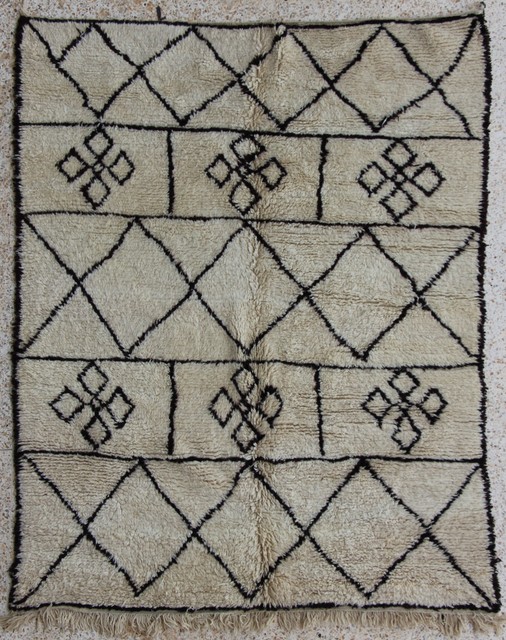 Beni Ourain carpets are considered the most prestigious rugs in Morocco, made from the very finest wool. every rug is one of a kind. The rugs are authentic tribal rugs fully hand-woven by women of the Beni Ourain and other neighbouring Berber tribes that reside in the North-Eastern Middle Atlas Mountains of Morocco. Winter is rough in the Moroccan Atlas Mountains where the lowest temperatures in Africa are observed. To protect themselves from the cold, Beni Ourain tribes, who lived in traditional tents, had no alternative other than to produce thick wool rugs to insulate themselves from an hostile environment.The Beni Ourain rugs were not intended to have a decorative purpose, they were traditionally used as bedding and blankets to keep them warm with their thick pile. 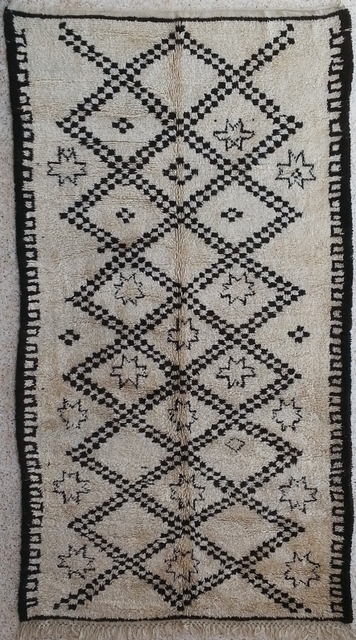 Because of their landlocked and mountainous location in the northern Middle Atlas, the Berber tribes of Beni Ourain have never been influenced by the Arab-eastern designs .Their rugs have kept their originality, reflecting archaic appearance of minimalist designs, composed of black and brown asymmetric patterns of diamonds,lines and triangles, in an off-white, cream background. The Beni Ourain tribes spend the summer with their herds on the heights of the range, over 2000 meters and come back down in the grassy plains with the first snowfall. The herds of goats and sheep enjoy a rich and abundant food throughout the year providing a high quality wool to produce the most appealing rugs of the world. 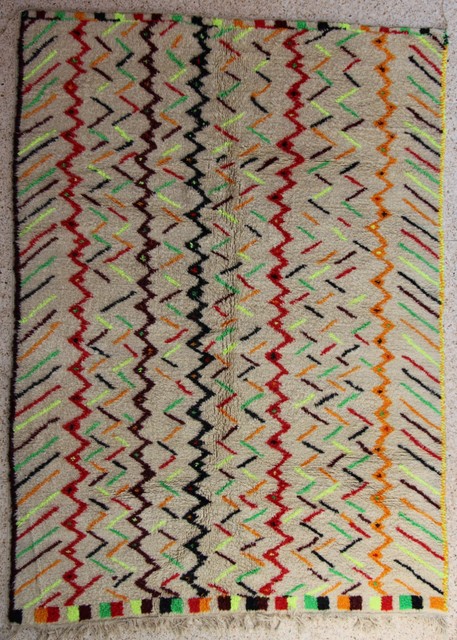 The Beni Ourain rugs very artistic designs have inspired many European artists such as Alvar Aalto, Le Corbusier (who matched the Berber rugs with sleekly designed furniture), Paul Klee and , as well as most famous modernist architects in the 1920’s and 30’s . They got trendy by Henri Matisse, who called them “The huge whites” 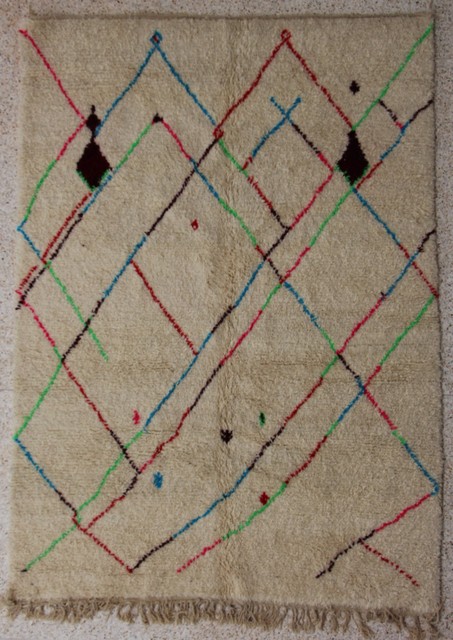 “I don’t see them as trendy; I see them as timeless” and ‘’this quirkiness is exactly what makes these rugs appealing to interior designers. They give a room, particularly a cold, modern room, warmth and patina as well as a dose of ethnicity,” said Timothy Whealon of Timothy Whealon Interiors in New York about the Beni Ourain rugs. 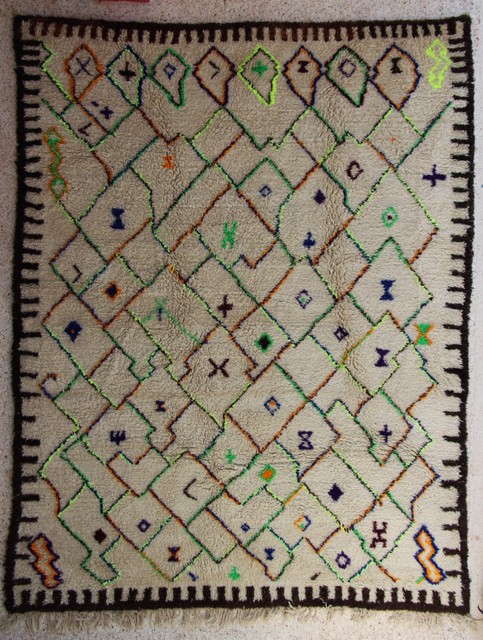 The charm, luxury and simplicity of these Berber rugs make them the most famous and appreciated carpet in Morocco and a worldwide interior design reference. These tribal rugs seem to combine a modernist taste for minimalist linearity with the graphic symbolism of primitive art. The tribal graphics pair well with contemporary and traditional space designs.

Azilal Rugs or Azilals, as their name suggests, originate from the craggy and steep Azilal (Moroccan Berber Region), located in the remote and hard to reach High Atlas mountains. Only performed by women of this region, Azilal rugs are made from virgin raw wool by alternating composed patterns of one single knotted line and one or two woven lines, according to a cultural ritual that mothers are passing down to daughters for generations.Azilal carpets are often associated with another name “Ourika” to actually refer to all the rugs that are produced a little further south by the High Atlas mountains tribes. 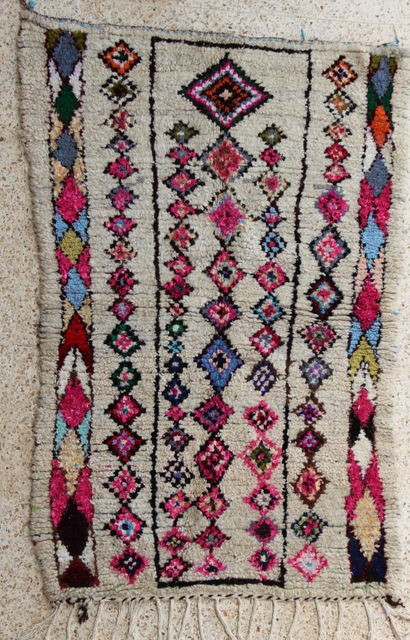 Azilal rugs feature great creativity in terms of design; they combine irregular and abstract patterns with numerous Berbers symbols and diamonds based graphics. They are often decorated with colored materials such as wool and cotton tainted with vegetable dye or threads of recycled cloth of different colors. Azilal carpets’ background is ivory /cream, made of natural virgin wool. Azilal carpets are works where every peasant woman of Azilal region tells her story. Rural life, motherhood and childbirth are patterns’ main topics. Actually , weavers appropriate tribal signs of their ancestors to express their wedding, pregnancy and daily lives. These rugs were not woven for commercial or profit-making purpose, but only for home use to cope with the rough high Atlas cold. Currently, in Western countries, in addition to Azilals’ regular use as carpets, they are widely introduced in interior decoration as beautiful wall ornaments or design elements. 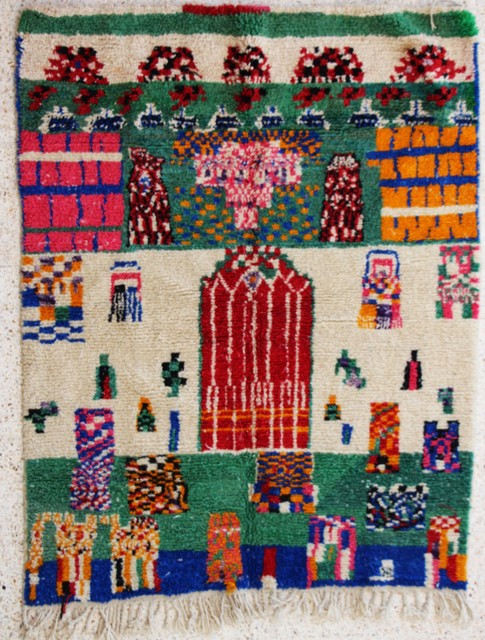 Fruits of weavers’ imagination and genuine works of art, comparable to abstract paintings, Azilal rag rugs are rare and were almost unknown in the market until the years 90. From Paris to USA and Tokyo, many galleries exhibit Azilal carpets as works of art. Their originality and immense strength in terms of graphics have deeply inspired artists such as Matisse, Paul Klee and Le Corbusier. 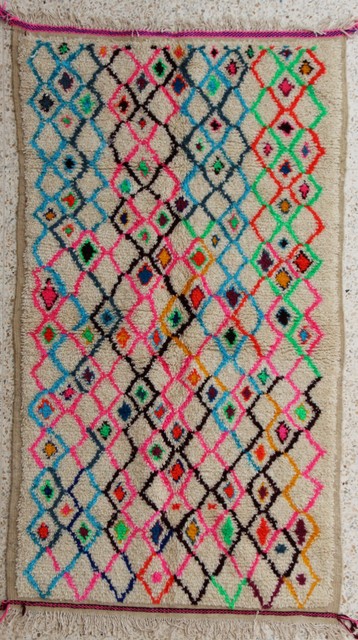