It is almost that time of year where the art world flies south for Art Basel Miami Beach. I could not be more excited that this year, not just one, but four, Charlotte galleries will be showing at various satellite shows in Miami. The variety of internationally renowned artists that each of the galleries are bringing to Miami is exceptional. From embroidery and collage to painting and photograms, there will be something for every art collector to experience.

The New Gallery of Modern Art will be showing at the 16th edition of SCOPE Miami Beach returns to the sands of Ocean Drive and 8th Street. Featuring 125 International Exhibitors from 22 countries and 57 cities, SCOPE Miami Beach will welcome over 50,000 visitors over the course of 6 days. Amidst an unprecedented outpouring of critical acclaim from press, curators and collectors, and a digital and social media outreach campaign garnering over 450 million impressions, SCOPE Miami Beach’s is once again poised to lead the charge for emerging contemporary art market. 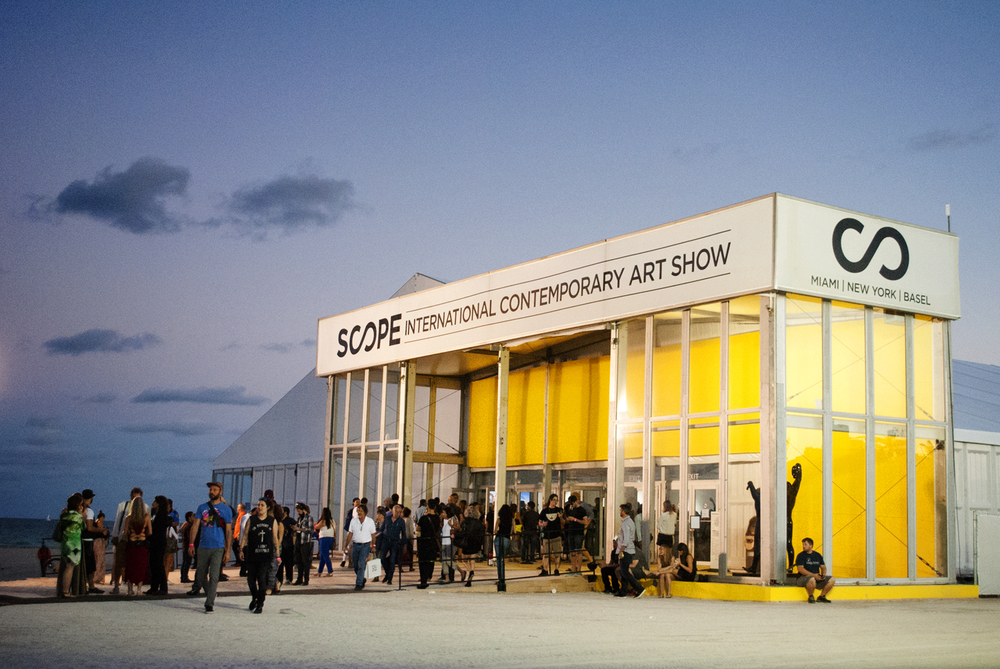 The New Gallery of Modern Art offers a range of artwork that educates, supports local endeavor, builds collections and importantly, introduces the Southeast to new aesthetics. 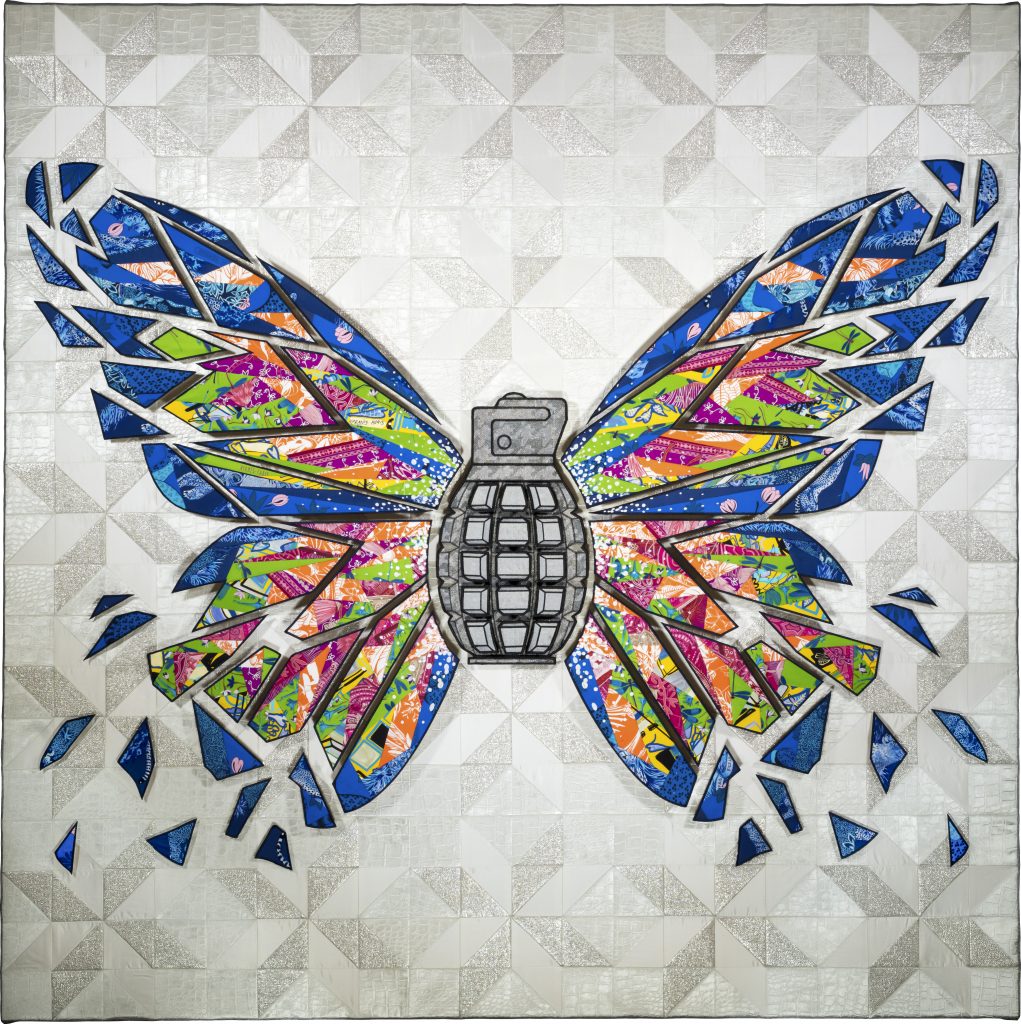 80″ by 80″ embroidered with Hermes fabrics 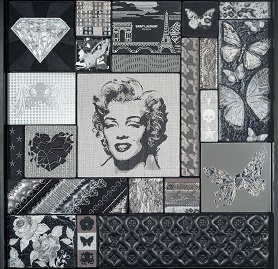 Stephen Wilson is a master level digitizer who has been creating embroidery designs and quilting patterns for over 20 years. He has worked in fashion, home décor, and traditional craft design. He has taught embroidery and quilting all around the country and is the recipient of numerous awards and accolades for his work in the embroidery industry.

When you think of embroidery and quilting your first thought is probably not what you will experience here. Quilting is the process of sewing two or more layers of fabric together to make a thicker padded material. Embroidery is the handicraft of decorating this fabric or other materials with needle and thread or yarn. The artist has taken these techniques, combined them, and created artwork that has never been seen before. You will see a blend of quilted backgrounds with three-dimensional embroidery, and the use of fabrics that have never been used in traditional crafting – everything from Hermes silk scarves, fashion fabrics like wool bouclé from Chanel and Marc Jacobs, and luxury fabrics like silk to create these unique fabric landscapes. The patterns combine traditional quilting concepts like Bargello, an Italian quilting style combined with the artist’s modern style of using dots and embroidery stitching. The fabric is often stitched on, manipulated, transformed, cut up into little pieces and then stitched back together to form the backgrounds. The embroidered elements are meticulously designed with each stitch created by hand and then applied to the background to create the piece. The work combines the heritage of Americana crafts with contemporary and pop art influences to create art that is entirely unique. 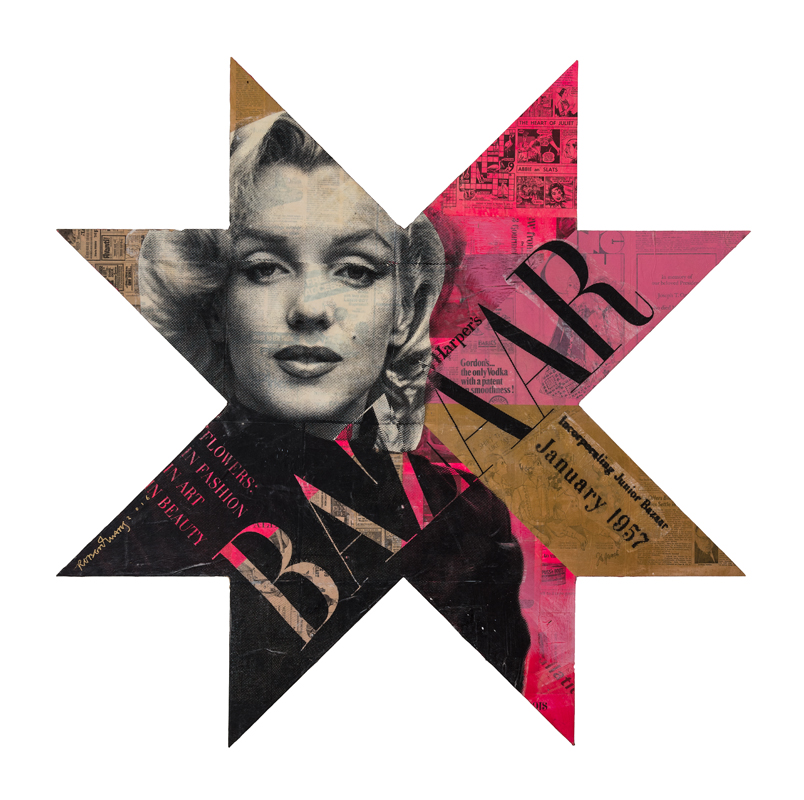 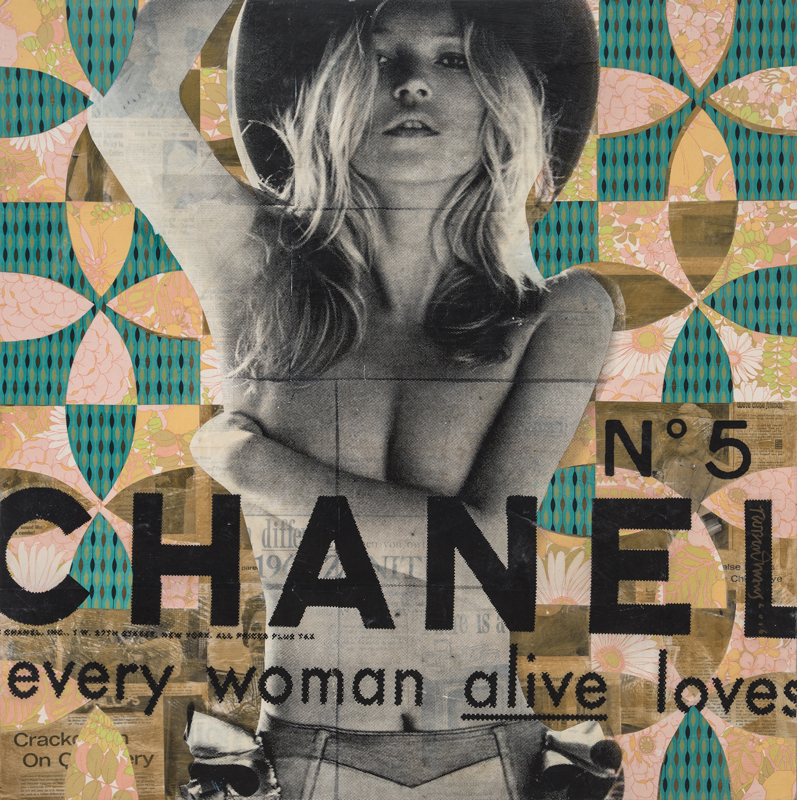 Chronicling a fascination with 1950’s and 60’s iconography, Robert Mars has produced a body of artwork from his studio in Connecticut that celebrates the commonplace objects and icons of an America long past in a thoroughly modern, and exquisitely constructed, manner. His eye for a distinct facet of American history is impeccable, and his ability to manipulate both the color and wordplay of vintage printed material has earned him reference with the likes of Andy Warhol, Robert Rauschenberg, and Richard Diebenkorn, among other masters from the School of Pop. By taking inspiration from the Golden Age of American popular culture and celebrating figures of the 1950’s and 60’s, Mars’ artwork chronicles an evolving relationship with celebrity. Through the application of a rich color palette and tongue in cheek attitude, Mars’ paintings evoke a vintage quality of design and pay homage to the idealized age of growth and hopefulness that was prevalent in the USA at the end of World War II. A time before the internet and mobile technology, where visual information was not constantly blasted to millions, and there was no such thing as instant digital celebrities, where instead people lived with the myth of the unique, untouchable and unforgettable personalities of Marilyn Monroe, Elizabeth Taylor, James Dean, Audrey Hepburn, Elvis Presley, and many others.
By merging his own concept of personal idols with those of mainstream culture, Mars is able to focus his work on a deeper analysis of the Golden Age of Americana. His early work focuses on many of the architectural and mechanical forms of the 50’s and 60’s,where muscle cars, motels, kitschy logos, and hulking monuments to the “modern” feeling of the time reigned supreme. More recently, however, Mars’ artwork has shifted toward the culture of celebrity, and he is strikingly attuned to the fact that these instantly recognizable and larger than life personalities continue to resonate not only with contemporary American culture, but with a worldwide market. 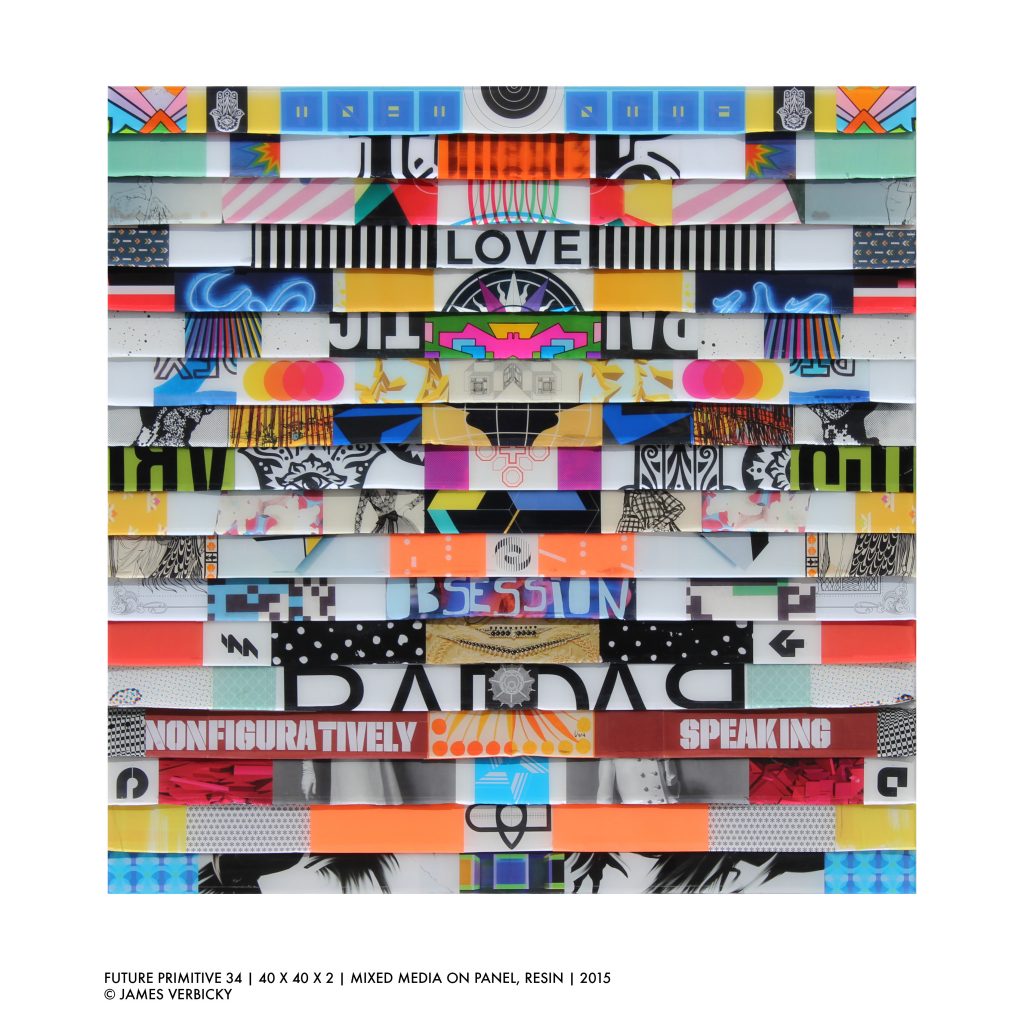 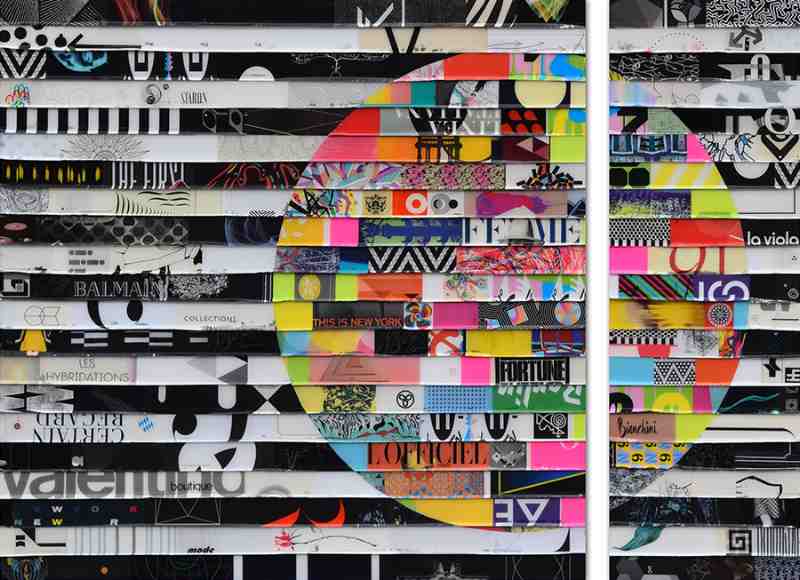 James Verbicky is a Polish-Canadian mixed-media artist who currently works in the United States. James Verbicky is renowned for what he calls “media paintings”, large sculptural assemblages of Baltic birch wood covered in vintage advertisements for popular brands and imagery from foreign magazines bought along the Seine in Paris. He arranges the layers of paper in a horizontal grid, paying homage to pioneering Modernists and Minimalists such as Piet Mondrian, Kenneth Noland, and Morris Louis. A resin topcoat renders the surface shiny and the paper transparent, so that the images on the backsides bleed through to the front, creating a sense of depth. Paying attention to what is behind each piece of paper “makes the collage more interesting and creates a certain mood,” he says. Verbicky’s collages, which can be “read” in any direction, evoke familiar scenes and subjects, from flowers in bloom, to a racetrack blurred in action, to stock tickers scrolling across a television screen. 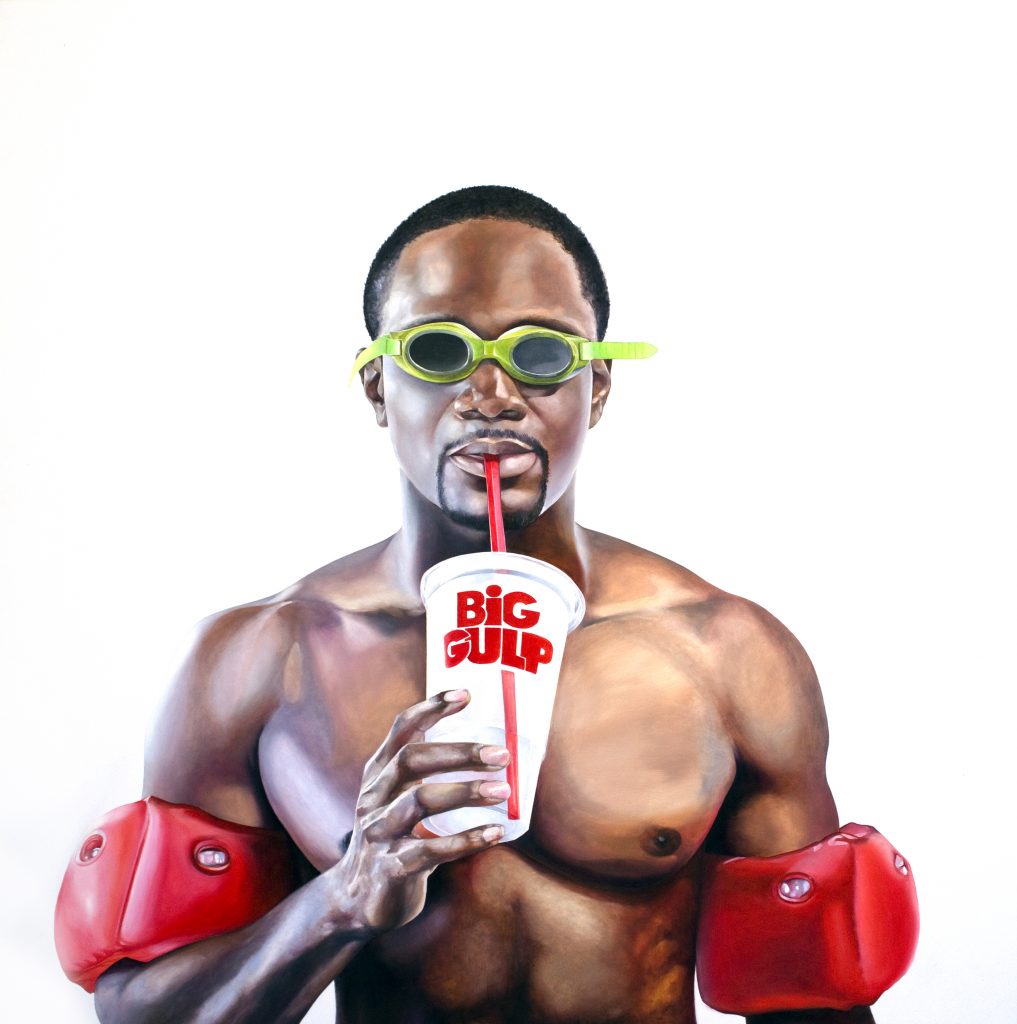 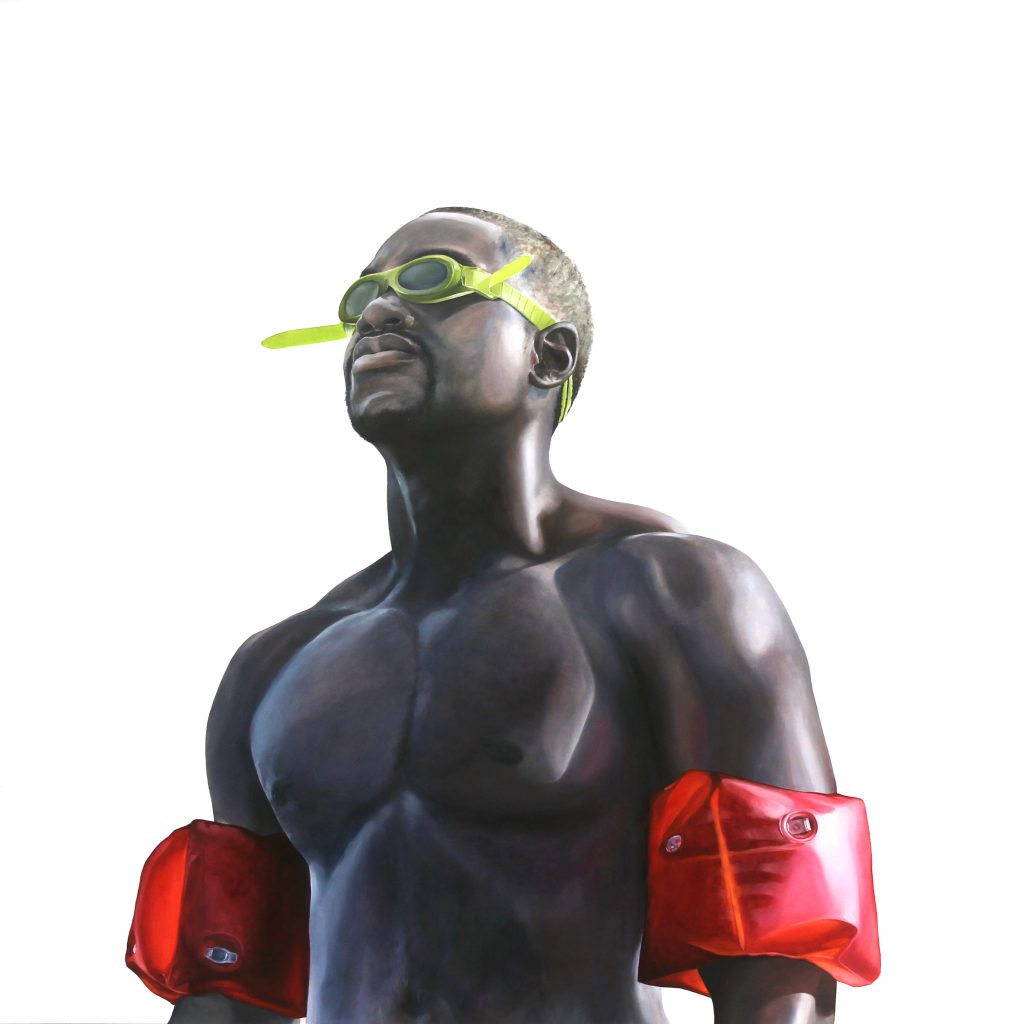 A mentor, a support system and a community of people who were open-minded. That’s what Charlotte-based artist Charles Williams says saved his life. Life saving in that his self-worth was actualized and he received the support he needed, which has led to a successful art career. With the help of his high school art teacher, Heath Hampton, Williams was guided and urged to put his art up in community spaces. From banks to frame shops to local stores, his work was there. He learned the business side of doing art before heading off to college.

He says the high school entrepreneurial venture taught him, “Okay, here’s how you present, here’s how you follow up,” he recalls. “Whether they bought something or not, I was encouraged [with], ‘you will be great, don’t give up.’ It really helped push me when things got tough and challenging.” Art paid his way through the Savannah College of Art and Design — more than $30,000 annually at the time — during which he continued to send artwork back to his hometown of Georgetown, South Carolina and did commissions. He calls it a community investment. But it also served as a life investment that sustained his exploration into the depths of his psyche which now permeates his art. See, Williams almost drowned as a child. His artwork speaks to that. 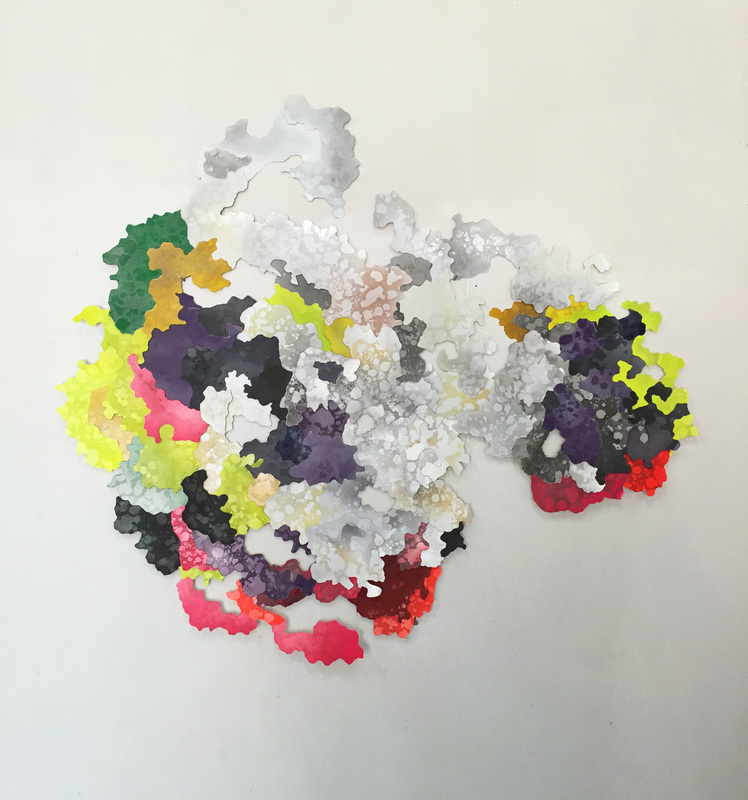 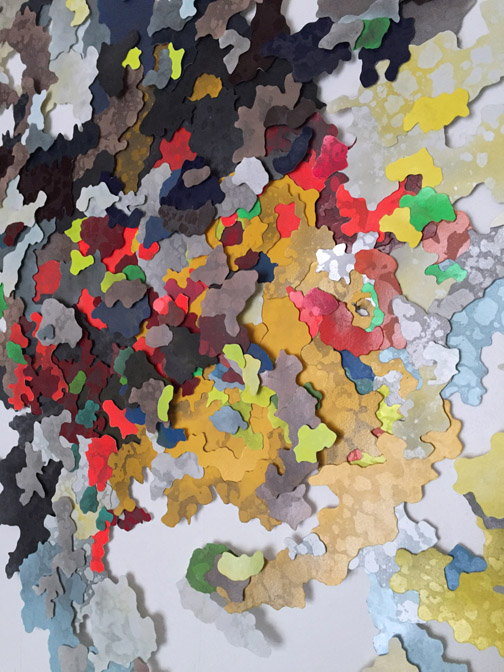 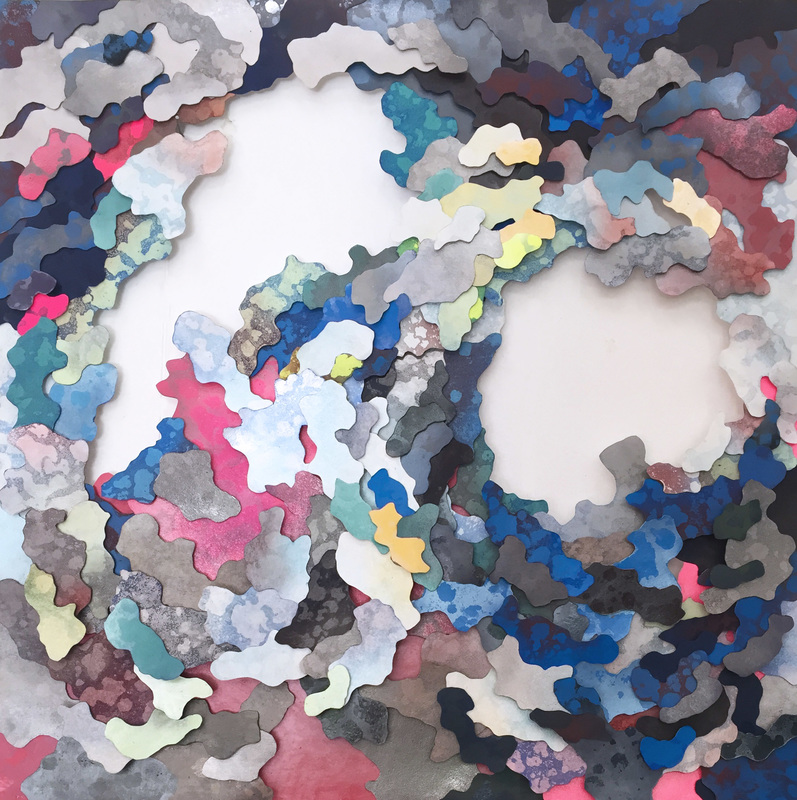 “Human attempts to control and predict the weather are fascinating to me. Each season, we have a prepared list of names for each major storm that can come our way. We have color coded radar maps that apply hues symbolically in order to alert us to the patches of rain, wind, and force that are thought to be encountered. When the storm breaks, news reports discuss each storm as though it is a person, imbuing it with a personality as details are described. There is an effort to identify, categorize, and understand each system. Ultimately, we are powerless against these sublime forces. In this series, I explore storms using screenprinted textures of raindrops that I have created using sand and water. The raindrops dictate how I cut the paper, and I am not fully in control of the results. As I print, cut, and stare, I find myself sitting in the middle of each disturbance, rearranging pieces that no longer fit together.” -Julie Ann Greenberg

SCOPE Miami Beach opens for the Platinum First View on Tuesday, November 29, 12pm-4pm; followed by the VIP and Press Preview 4pm-8pm. The fair will run through Sunday, December 4th.